Police are learning lessons in fear 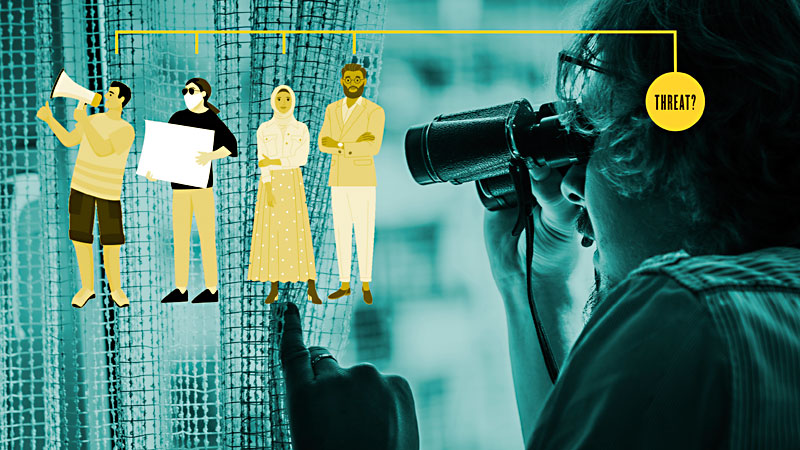 Austin police, like police everywhere, have an occupational obsession: sifting truth from lies. So a course promoted by the Austin Regional Intelligence Center in July 2019 was no doubt appealing. Offered by a group calling itself the Laboratory for Scientific Interrogation, the program promised, for a fee, to turn each attendee into a "walking polygraph." The only problem: Real scientists in the real world consider the course to be bullshit.

Known as Scientific Content Analysis, or SCAN, the course is one of many training programs sponsored in recent years by ARIC, many of them of dubious value. A flier advertising SCAN was among the documents included in the BlueLeaks hack of ARIC and other "fusion centers" across the country.

SCAN was developed 30 years ago by Avinoam Sapir, a 71-year-old former Israeli intelligence officer who travels the world teaching the course, including a stop in our city. (Unlike other trainings promoted by ARIC, the three-day SCAN course hosted by the Travis County Sheriff's Office was not free.) Sapir claims the technique is 95% effective in detecting deception and sells SCAN analyses online of everything from the Book of Genesis to the Robert Mueller report.

“Junk science like SCAN is the root problem in so many false convictions.” – Just Liberty’s Kathy Mitchell

The LSI website's assertions and testimonials about SCAN have the savor of a late-night infomercial. They claim that "SCAN will solve every case for you quickly and easily. You only need the subject's own words, given of his/her own free will." The technique is appealingly simple: "To use SCAN you need to do the following: 1. Give the subject a pen and paper. 2. Ask the subject to write down his/her version of what happened. 3. Analyze the statement and solve the case."

Law enforcers worldwide, including the Travis County Sheriff's Office, have bought the LSI sales pitch that "Training your personnel in the SCAN technique will be the best investment in their law enforcement career!" But multiple studies have concluded that SCAN is utter nonsense. A 2016 U.S. government review of the program concluded that it "did not distinguish truth-tellers from liars above the level of chance" and that some of its "indicators of deception" were in fact signs that a suspect was telling the truth.

"Junk science like SCAN is the root problem in so many false convictions," said criminal justice reform advocate Kathy Mitchell of Just Liberty. "We have no idea how many people have falsely confessed based on coercive techniques that we now know are no better than guesswork. And SCAN incorporates handwriting analysis, which should be consigned to the dustbin of history."

As previously reported, ARIC's threat liaison officer program enlists not only sworn police officers but also security guards, EMTs, firefighters, and private citizens from a variety of backgrounds – having them sign nondisclosure agreements to keep the program a secret. Many of the trainings that ARIC presents and promotes are offered to lay audiences, including TLOs, to help them identify suspicious activity and threatening behavior.

One recurring topic of these is school shootings. In October 2018 ARIC presented a class to educators, law enforcement, and "anyone else who may be involved in addressing threatening behavior" in schools. The center also promoted a presentation in early 2020 by the U.S. Secret Service on how to identify students of concern and implement intervention strategies. "The threshold for intervention should be low," the course description reads.

Another area of emphasis – following from the fusion centers' post-9/11 roots – is foreign and domestic terrorism. In a 2017 course called "Terrorism Recognition, Aware­­ness, and Prevention Partnership (TRAPP)," participants – including not just first responders but also emergency managers, medical personnel, and "non-sworn security" – were taught to spot "terrorism­-related indicators" and identify terrorist groups and their methods. Another program in 2018 focused on the prevention of suicide bombing.

ARIC also sponsored lectures on white supremacist organizations and the radicalization of American citizens by the Islamic State. A program held at Great Hills Baptist Church was titled "Protecting Faith Based Institutions – How can the local Fusion center help keep you safe?" It featured an FBI speaker who instructed attendees on what constitutes suspicious activity and how to report it. The target audience: anyone involved in the leadership of faith-based institutions in Central Texas.

Documents found in BlueLeaks also detail courses offered to police on the Reid technique, most recently in December 2018. This involves not just an interrogation process, but a philosophy of how a suspect should be treated when brought in for questioning. The Reid technique is the spiritual heir to the "third degree," that legendary trope of detective novels where a suspect is bound to a chair, a single light bulb dangling before his face as shadowy detectives grill him for hours about his connection to a crime.

Like the third degree, the Reid technique instructs interrogators to assume a suspect is guilty and to treat a confession as the ultimate goal. Interrogators analyze a subject's nonverbal cues; if they determine the subject is lying (as they often do), then follows a series of nine scripted steps. They tell suspects that law enforcement has proof of their guilt, even when untrue. They shut down any denials offered by suspects. They then attempt to cozy up to suspects, validating any reasoning they might have for committing a crime, attempting to extract a confession.

Decades of research have shown that, like SCAN, the accuracy of nonverbal cues in determining a person's guilt is about the same as a coin flip. Reid teaches interrogators to look for signs of anxiety, even though most people, regardless of guilt, react with anxiety when questioned by officers. As these cues prompt officers to push harder for confessions, critics say the Reid technique amounts to little more than coercion.

"The Reid technique has been discredited over and over in the real world, where innocent people have confessed to horrible crimes and then been exonerated by DNA," Mitchell said. "But that happens only in the highest-profile cases. Most criminal cases have no DNA; the confession is everything. So we cannot know how many innocent people right now are sitting in prison because of a coercive Reid interrogation." 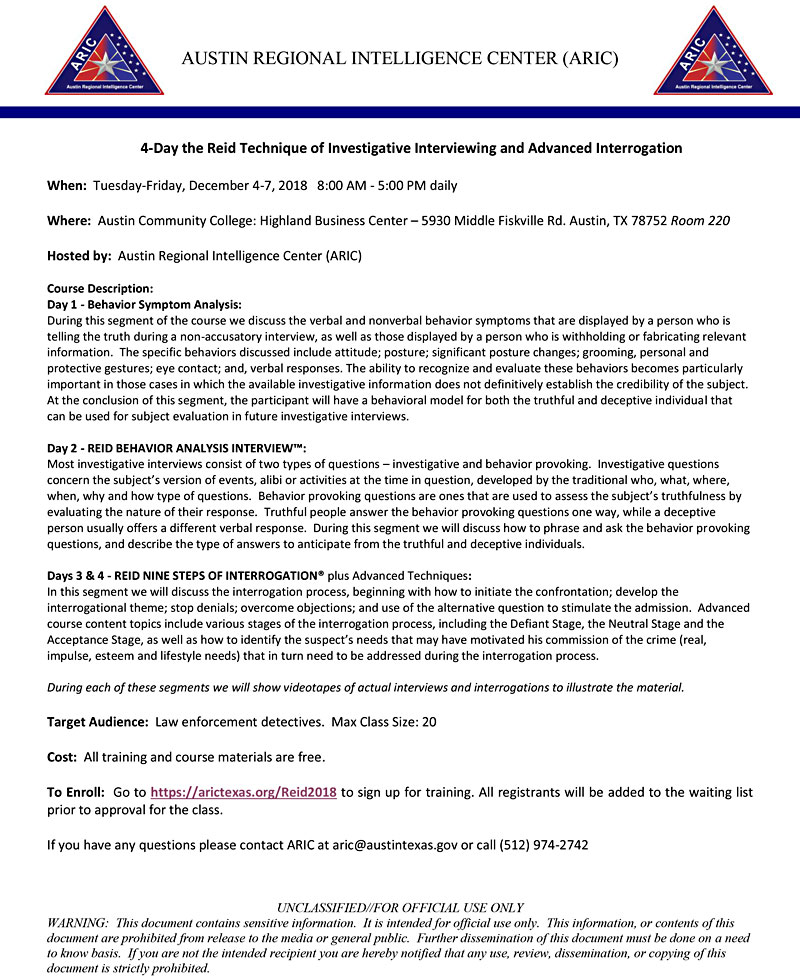 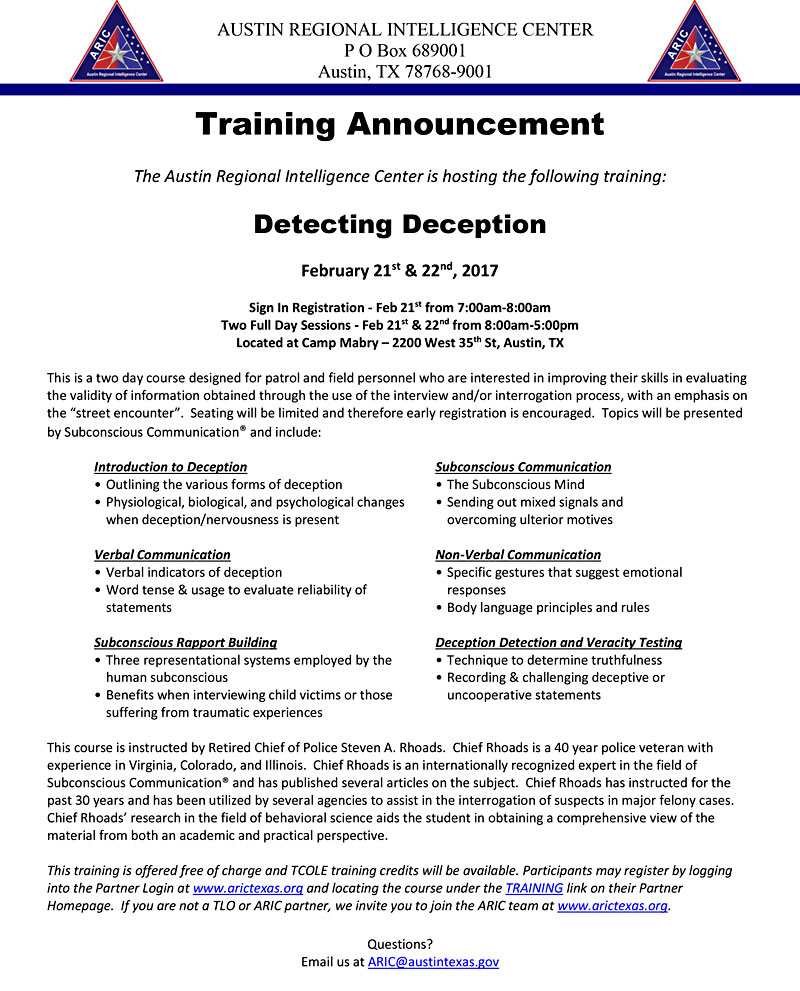