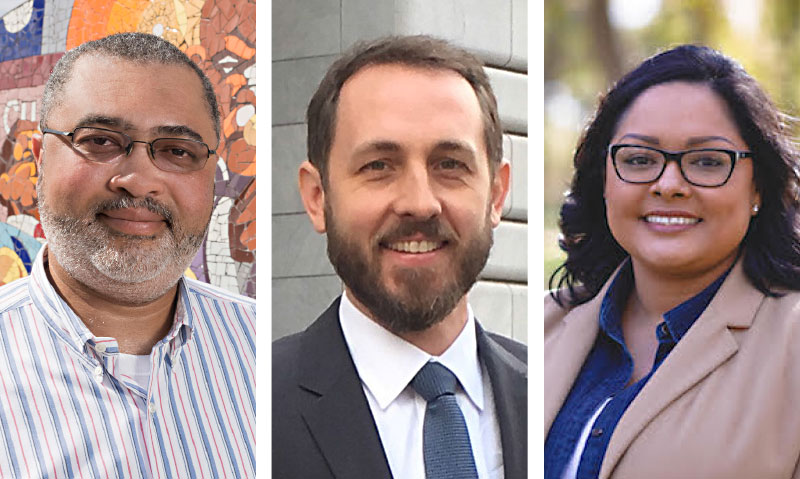 Former Travis County Judge Sarah Eck­hardt's resignation to run for (and win) the Texas Senate seat vacated by Kirk Watson set further dominoes in motion within county government and local Democratic politics. County party Chair Dyana Limon-Mercado stepped down from that post to compete for Eckhardt's unexpired term as county judge, through 2022. Her opponents are County Com­mis­sioner Jeff Travil­lion and her own predecessor at the helm of the Travis Dems, Andy Brown – whom Eckhardt defeated in the 2014 county judge primary. (Eck­hardt was unopposed by either party in her 2018 reelection bid; Sam Biscoe, the county judge for 16 years before Eckhardt who is filling the seat in the interim, plans to return to private life in November.)

Normally, the county judge and commis­sioners are less prominent political figures than Austin's mayor and Council, various members of the Legislature, or even other elected county officials like the sheriff and district attorney. When Eckhardt became one of the local leaders granted emergency powers by the COVID-19 disaster declaration, and thus a fixture of media coverage of the pandemic response, she had already picked some notable fights with Gov. Greg Abbott and other GOP state leaders over immigration and justice issues. Now that she's in the Senate, her successor will be facing the same issues.

Limon-Mercado, also executive director of Planned Parenthood Texas Votes, is succeeded as party chair by Katie Naranjo, selected last week by the 136 Democratic precinct chairs – and those same people will now pick Eckhardt's successor, because of the timing of both Watson and Eckhardt's resignations. (Again, the GOP is taking a pass on a race they have no hope of winning.) "I was a precinct chair for four years, and what I can tell you is that we got no interesting votes," Naranjo says. "We got nothing cool to decide, had no open vacancies on ballots, anything." Though the process is defined in the Texas Election Code, several precinct chairs have expressed discomfort with the new responsibility, mostly because their demographics are not representative of Travis County: Of the 136 eligible chairs, all but about 17 are white, whereas the county is 50% people of color. The future county judge will need only 69 votes to win. If it's Travillion, then precinct chairs have to pick his replacement.

"It's frankly shameful that I alone will be repping every single student, and every single 18- to 25-year-old ... which is easily over 100,000 people," says Joe Cas­cino, chair of Precinct 311 in West Campus and president of Texas College Dem­o­crats. "That's not a responsibility I take lightly." Roy Woody, chair of Precinct 407 in Del Valle and a vocal supporter of Limon-Mercado, laments that the same people who elected her to Dem Party chair won't be able to cast a vote: "Those voices that gave her that win, they're not at the table." Precinct chairs worry about the many political insiders among their ranks. "I also really don't appreciate that the ballot isn't secret," Cascino notes. "This opens the door to a whole slew of bad feelings."

The Contenders & the Issues

At this moment of COVID crisis and criminal justice reform, the county judgeship comes with big shoes to fill. With the state's pandemic response uncertain and uneven at best, the county is the lead agency for emergency response, as it is in most disasters, working with Austin Public Health (which is a joint city/county department, as is EMS) and with Central Health (the stand-alone public health care district). COVID has drawn attention to existing inequities in health care access, an issue that both candidates and precinct chairs are prioritizing in this race.

Travillion says, "We've worked directly through Austin Public Health, directly with school districts, with mayors and City Council members to make sure we're addressing the issues that are in place .... Those are the types of things that happen because you have built relationships in the community ... and I've worked in this community for 35 years."

Some precinct chairs want that kind of institutional experience: "It's not a sexy job, it's a deliverables job. It takes someone with depth of understanding and knowledge [to] get a lot done for a lot of diverse populations," says Pat Epstein, president of the Pflugerville Area Democrats Club.

Lived experience of those inequities is also important to the chairs; Travillion was president of the NAACP Austin chapter for seven years and president of the Black Austin Democrats, while Limon-Mercado was the first in her family to graduate college and survived an abusive relationship. She has worked in Central Booking and at the Texas Criminal Justice Coalition and says the need for criminal justice reform is what's fueling her run for county judge. "Reading her bio, she knows what struggle is. And I don't think she's lost sight of that," says Woody.

Limon-Mercado takes the long view when discussing health care reform: "It's disproportionately people in Precincts 1 and 4, the Eastern Crescent, the Latino community, the African American community, who are experiencing higher rates of COVID." (Travillion represents Precinct 1.) "There's some indication that other health conditions" such as obesity, diabetes, or heart disease "may contribute to the impact that COVID has on people's systems. ... They're not new problems, they've just been magnified."

Diversion as a means of justice reform was Andy Brown's main objective with the Sobering Center, which he helped establish in 2014 and which has diverted 3,400 people from jail. "I think the most critical part of my experience ... is the fact that I've taken a public policy idea from start to finish," says Brown. "I worked with the city, the county, and the state to create something that benefits our community."

Brown began campaigning earlier than his opponents, and his outreach has been persistent by all accounts: "Andy Brown literally called every person," says Jeanette Lachman, chair of Precinct 356. That relationship-building won him Lachman's support as well as that of Leslie Boykin, chair of Precinct 309 and vice president of Circle C Area Democrats: "Having been the former county chair, having worked nationwide with Beto O'Rourke [Brown was a top aide on O'Rourke's presidential campaign], he knows a ton of people. I think he has the personality ... to reach across lines and bring people together."

Within a small group of mostly insider political activists, emotions run high and there are no secrets. Many precinct chairs and even the candidates themselves expressed bitterness about the process and those involved, and expect it to end in bloody political sport. "The 136 people who are making this decision are also, themselves, elected," says Naranjo of the discomfort. "I cannot change this process because it's actually in Election Code. And if folks would like to join me in the spring to make it a more open and democratic process, then I would fully love their support at the leg­is­lative session to make those changes. But what we can't have happen is a vacancy not be filled. No county judge serves no one."