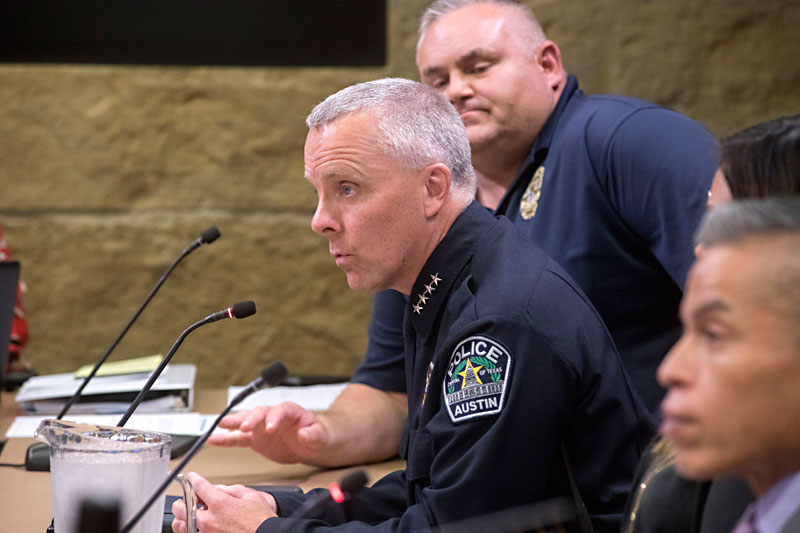 A trio of reports on the Austin police academy have concluded that the paramilitary approach it uses to train cadets into officers is outdated and harmful to police­-community relations. The City Council is considering whether to keep the academy shuttered for the next 12 months while needed changes are made – which would automatically reduce the size of Austin's police force.

Two of the reports were written by Sara Villanueva, a professor of psychology at St. Edward's University who was hired by the Austin Police Department in September 2019 as its first organizational development and training manager. A memo from Assist­ant City Manager Rey Arellano described Villanueva's role as "developing and executing curriculum review strategies and assessing teaching and learning methodologies" at the academy. Once Council mandated in December a series of audits and reviews of APD in the wake of revelations of racism in the top ranks, Villanueva's work quickly became focused on responding to that directive.

The third report was written by Miguel Ferguson, a consultant who was engaged to review specific academy courses. All three reports have been sent to Police Chief Brian Manley; as of press time, they have not been officially released, though copies have circulated among Council offices, advocates, and media outlets.

Villanueva's first report is a SWOT analysis (strengths/weaknesses, opportunities/threats) of the academy, particularly its classroom instruction. Through interviews with academy leaders, instructors, and cadets, as well as in-class observations, Vil­la­nueva's report assesses what the academy is doing right and where it could improve.

The 32-week academy includes the basic police officer curriculum required by the Texas Commission on Law Enforcement, along with other courses specific to Austin, such as those focusing on gender and race. (A forthcoming course on the history of policing and race in Austin was co-authored by the Office of Police Oversight.) Villa­nueva concludes that, given the limited resources and training provided to academy instructors, they do a decent job at teaching the required material.

However, she describes the "paramilitary culture" at the academy as a major problem. Its emphasis on chain of command, along with harsh treatment from instructors – which some former cadets consider abuse – implicitly and explicitly reinforce the pervasive us vs. them mentality in modern policing.

"There is an apparent mismatch between a typical paramilitary format and effectively preparing cadets to work in a manner consistent with the community-oriented police services model," Villanueva writes in the report. "A growing body of research has shown that paramilitary-structured academies do not align well with the principles of community policing and problem-solving, which are based on collaborations and partner­ships."

At the root of the problem, Villanueva told the Chronicle, is that "some instructors see themselves as cops who teach, instead of teachers who are teaching cops." Cadet instructors do not receive any "formal preparation or training on how to teach effectively," Villanueva found.

Upon reviewing post-class surveys of instructors, Ferguson found that many feel "few if any professional benefits" come with their work at the academy. Most are white men, and none of the "diversity" courses are taught by Black instructors – a point of criticism from some cadets in the surveys.

Villanueva told us that although instructor ability varied, most understood the TCOLE content well but had little understanding of how to teach the material. If that method doesn't engage and respect cadets as adults, which the paramilitary model does not, then cadets are less likely to retain the learning they need to serve the public well.

In the report, Villanueva recommends more investment in instruction – not just better pay (and the opportunity to accrue overtime like other officers), but "in teaching as a skillset and as a career," she writes. "We need to make sure instructors have the resources they need to be good teachers." Until that can happen, she agrees that the academy should remain closed until at least November. Though Villanueva stepped down from her APD role last month, she tells us APD leadership was receptive to her recommendations.

Austin Police Association President Ken Casaday questions the wisdom of completely moving away from a "warrior" mindset into one that trains officers to be "guardians." Casaday notes (as do many police leaders) that officers are tasked with entering dangerous situations where both skill sets are needed. "Officers need training on counseling people," the union boss told us, "but if you can't go from a guardian to a warrior who can stop someone with an AR-15, you can't be a police officer."

City Hall has already agreed to not hold a cadet class before November; this contributes to part of the $8 million in savings that City Manager Spencer Cronk's draft fiscal year 2021 budget redirects from APD. That timeline would also allow a separate review of the academy curriculum – by a citizen panel with support from APD, OPO, and the Equity Office – that got off to a rocky start earlier this year to be concluded by October. Council members have proposed amendments to Cronk's budget that would keep the academy closed through FY 21 (ending next Sept. 30), which would free up another $10 million to either reinvest elsewhere or reserve to relaunch an improved academy.

Former cadets who left the academy after enduring what they felt was aggression and abuse tell us they're skeptical that the changes recommended by Villanueva and Ferguson will be sufficient even if APD leadership is truly committed to making them. They say the paramilitary culture Villanueva describes pervades not just class­room instruction but the entire cadet experience.

"What happens outside of the classroom informs what happens in the classroom," said Summer Spisak, who dropped out of her cadet class in May 2017 and is one of 10 former cadets who joined a letter to APD chiefs calling for changes. "You cannot use a fear-based training model to reorient the force toward community policing. I don't think the current academy can do that."