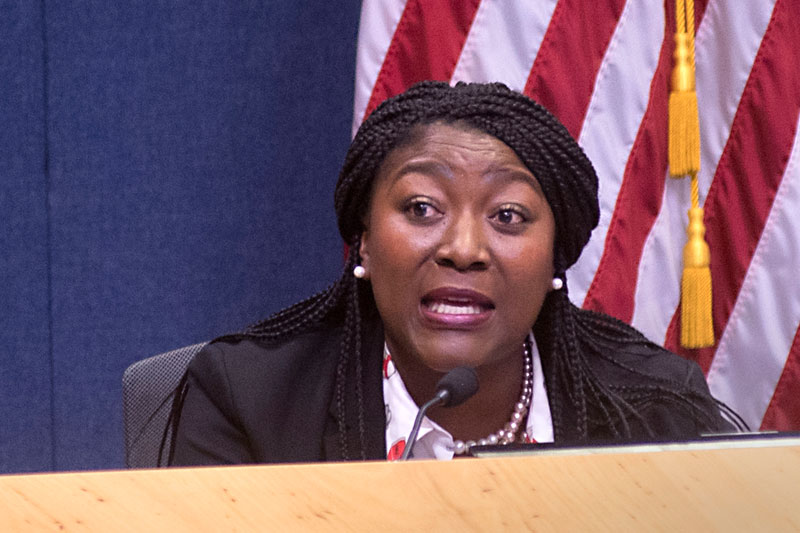 As City Council prepares to adopt a budget on Aug. 12 that will, for the first time in at least 10 years, reduce the budget of the Austin Police Department – and possibly by a historic amount – Chief Brian Manley remains defiant.

At the Tuesday, Aug. 4, work session, the last before budget adoption, Council members came prepared to talk about how much money to cut from APD, how to reallocate those savings to alternatives to policing, and how city staff should explore deeper divestment throughout the next calendar year. But Manley, who was on hand to answer questions from CMs about how the department could help carry out different proposals to limit disruption to the city's public safety apparatus, was prepared to fight a different battle.

One proposal, from CM Natasha Harper-Madison, offers a compromise between people at City Hall who want to approach "reimagining public safety" cautiously, over a series of months, and those who seek to reduce police funds and decouple responsibilities immediately. Harper-Madison proposes approving just six months of the city's budget next week, effectively setting a deadline of February for staff to work out the details of the proposals other CMs are offering – like making Internal Affairs or the forensics lab more independent entities. More immediate cuts – like canceling cadet classes until at least November – could be made now.

Advocates acknowledge the potential need for a compromise but continue to push for cuts in August. "Obviously we have our sights on immediate cuts," Austin Justice Coalition Executive Director Chas Moore told us. "Continuously scrutinizing the police budget is worthwhile, but if we're waiting six months to do anything, that's a further affront to the tens of thousands of people in this city loudly calling for immediate divestment from the police."

At Tuesday's work session, Council deliberated one of those immediate cuts: a proposal from CMs Leslie Pool and Greg Casar to shut down the police academy for all of next year while reforms are made (for more on the academy problems, see "Police Academy Zero"). The delay would free up about $10 million in one-time savings that Casar proposed be used to fund operation of permanent supportive housing, among other services. Council has reached consensus that cadet classes should be delayed until at least November, but not for the whole year.

“Delay of cadet classes represents one of the greatest threats to the safety of our community,” Chief Brian Manley told Council during a heated Tuesday work session.

City Manager Spencer Cronk invited Man­ley to talk about how delaying or canceling cadet classes would impact department operations. His immediate response, and the ensuing 10 minutes of pushback against other potential cuts from Council, left CMs stunned. "Delay of cadet classes represents one of the greatest threats to the safety of our community," the chief told Council.

By 2022, Manley said, APD would be reduced to the same staffing levels as in 2012, when Austin's population was about 124,000 fewer. "That's like leaving the city of Round Rock without any police officers," Manley said. He did not address the other half of the divest/reinvest equation – Coun­cil wants to stop the flow of new officers into the department, partly, so they can better fund other public safety alternatives.

Manley then proceeded to go down a list of proposed cuts, dismissing each as unfeasible, without offering any olive branch to Council on how to make them workable. The overtime budget can't be cut if cadet classes are canceled; the department needs money for new cell phones, because they connect to officer-worn body cameras; mounted patrol shouldn't be cut, because they are a critical tool for crowd control.

Manley then dipped his toe into the fearmongering waters usually churned up by the Austin Police Association and the Greater Austin Crime Commission. "I'm sure everyone just [saw] the Wall Street Journal post that showed of the 15 most populated cities, our percentage increase in homicides here in Austin is the highest," Manley said, referencing a story that examined growing instances of violent and property crime in cities across the nation. "We need to have officers on the street to respond to the calls so that we can ensure the public safety with adequate response," Manley continued.

As Manley well knows, Austin is still one of the safest big cities in America. The Jour­nal story does show a 53% increase in homicides for the first half of 2020 – from 13 the prior year, to 20. But the actual homicide rate per capita is 2.33 per 100,000 residents, the second-lowest in the nation for big cities. "Every murder is a tragedy, but the homicide rate in Austin is still in the world of small numbers," local activist Chris Harris told us. "It's a bit of malpractice to compare Austin's homicide rate to that of Chicago."

Bad-faith actors use such cherry-picking to get the public behind their causes all the time, but it's different when a city department head takes the same approach. "Violence in Austin is a serious issue and Council is taking it seriously," Casar told us of the chief's comments. "But our city administration should not be spreading misleading information that they know is misleading, and fearmongering. It degrades and disrespects the conversations we're trying to have."

As Manley went on, a frustrated CM Jimmy Flannigan, chair of the Council Public Safety Committee, addressed Cronk directly. "Spencer, I beg you to give us department heads who are wanting to partner with the Council, because I am tired of working with a department head who fights the Council." Three CMs were so alarmed by the chief's comments that they met with Cronk immediately following work session to further express how hard it will be to "reimagine public safety" without Manley's cooperation. Under state law, only Cronk has the power to remove the police chief.

Editor's note: An earlier version of this article incorrectly stated Austin's homicides per capita as per 1,000 residents; the correct phrasing is per 100,000 residents. The article has since been updated to reflect this correction. 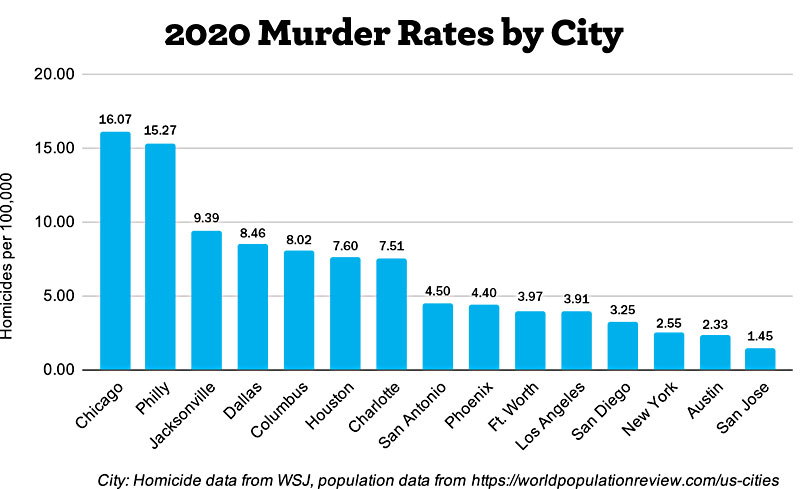 Although Austin has seen the largest year-over-year percentage increase in homicides of the nation's 15 biggest cities, the per capita homicide rate remains second lowest of those cities. Police Chief Brian Manley left that part out as he fought back against Council's proposals to disinvest in his department. (City homicide data from WSJ; population data from worldpoluationreview.com/us-cities.)

Council is set to adopt the budget on Aug. 12. For more on what’s been proposed thus far, see “Resiliency, Rethinking, Recovery,” July 24, and visit the Council message board.