As City Manager Spencer Cronk proposes $60 million for homelessness services in the fiscal year 2021 budget, a new consultant report presented to Council on Tuesday, Aug. 4, recommends a broad review of how those providing services interact with each other – from the city to the Ending Community Homelessness Coalition (ECHO), to public safety and health agencies, to the business community.

Specifically, the consultants say ECHO, which leads what's known as the Continuum of Care, needs to work with the city (the CoC's primary funder)* and with its provider partners to track and share data more consistently to better inform investments in different services. Historically, coordination has not been great – sometimes due to clashing politics and personalities but often more systemic. Provid­ers have not always been asked (and in some cases don't have the tools or training) to track the data points to determine if and how people succeed in exiting homelessness, or why they do not.

The report was written by Barbara Poppe with support from Matthew Doherty, both former heads of the U.S. Interagency Coun­cil on Home­lessness. They found that in Austin, 64% of single adults who leave a homelessness program depart for an unknown destination, while only 15% are known to have transitioned to permanent housing. (Tracking unhoused youth and families is much better, per the report.)

"It's not that we don't have good programs," ECHO Executive Director Matt Mollica told the Chronicle. "But if we're not understanding how they relate to each other, how people experiencing homelessness are being served, and where we need more resources, we're not going to know what we should focus on to drive down the unsheltered population."

The report urges the city, with guidance from ECHO, to run a fine-toothed comb through the many contracts it approves for the outreach, diversion, and stabilization services that reduce homelessness. Some contracts have been renewed routinely for years; the consultants suggest the city examine these legacy agreements to make sure they align with its "Housing First" model for reducing homelessness and to update how success is measured.

The report does not suggest that ECHO's Action Plan to End Homelessness, adopted by Council in 2018, should be replaced; rather, ECHO and its partners should develop an implementation strategy. That includes building up the system's capacity for rapid rehousing (RRH), short stays for people who suddenly lose their housing, as well as permanent supportive housing (PSH) for people with more intensive needs – a goal that Mollica has championed since arriving at ECHO in August of 2019.

Overall, the report estimates the city can expect to spend $19.9 million a year in new operating costs as part of a "modest expansion plan." That would cover costs associated with operating 500 new PSH units (priced out at $29,000 per person served) and 200 RRH units ($14,000 per person served). This does not include the one-time capital costs to build new units or purchase and convert existing buildings, such as the hotels and motels the city is currently acquiring.

* Editor's note: This article has been updated since publication to clarify that the city is the primary funder of the CoC, not of ECHO. 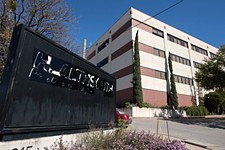