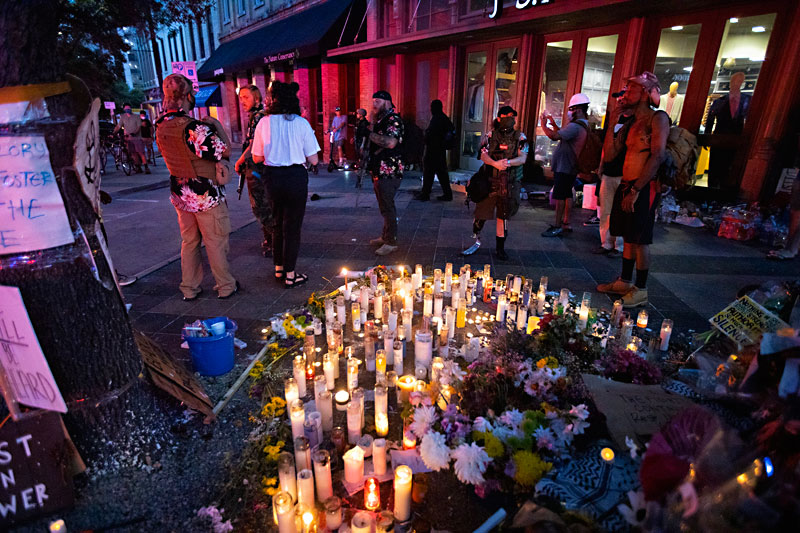 Boogaloo boys (some wearing the extremist group's trademark Hawaiian shirt) were a regular presence around the altar built to Garrett Foster at the corner where he was killed. (Photo by Jana Birchum)

In the 24 hours leading up to Saturday night's protests, Downtown landlords warned tenants to watch for right-wingers establishing sniper's nests atop their high-rises. Trump supporters announced on social media they were traveling to Austin to confront antifa. And local and state police finalized their plans to bring scores of cops and tons of equipment into the heart of the city.

Also in those 24 hours, Austinites learned the name of the man who had killed Garrett Foster the week before. A group of about 30 amateur community investigators identified Daniel Perry, a U.S. Army sergeant, as the man who drove his car into marchers on July 25, rolled down his window, and shot Foster three times in the chest. (Perry's lawyers confirmed his identity in a statement early Friday morning.)

Perry told police that night that he inadvertently turned into the demonstration and then fired in self-defense after Foster pointed the barrel of his AK-47 at him. Many eyewitnesses, and bystander photos and video, dispute Perry's version of events, but APD released him and withheld his name for nearly a week, spurring the citizen sleuths to take action.

This past Saturday, demonstrators arrived at Fourth and Congress, the site of Foster's killing, around 7pm. While police had maintained a light footprint around the Mike Ramos Brigade's vigil for Foster the day after his death, now cruisers with strobing lights were stationed to the north and south, and a police helicopter circled overhead. At least a dozen civilians carrying assault rifles – appearing to take Foster's place as armed protectors of the BLM protests – could be seen at the periphery, scanning the crowd.

As tensions had ratcheted up the day before, APD put out on social media a reminder that – while "your First Amend­ment right is important to us" – it is unsafe to block the roadway. Demon­strators managed to hold the intersection at Fourth and Con­gress for about 10 minutes before mounted police advanced on the group and pushed them to the sidewalks.

Then followed about two hours of stalemate. As protesters chanted and screamed insults, the cops on horseback withdrew to the south; 50 or more bicycle cops from the north simultaneously replaced them. Then the bike cops withdrew, replaced by dozens of DPS troopers in battle fatigues with riot shields. Some police swooped in to make arrests or deploy pepper spray; most stood quiet and stoic.

For a time, a lonely group of about 10 "boogaloo boys" (some in Hawaiian shirts) with their own assault rifles stood at the corner, separated from the protesters. An MRB chant leader dismissed them, yelling into her megaphone, "Fascists bleed when they come to Austin." She was more concerned about the police. Time and again, she tried to draw the crowd back into the street, without success until the cops again withdrew around 9pm. Only then did the night of protest resemble those of the previous weeks, as a body of about 100 marchers blocked traffic, moving east on Cesar Chavez, and then north to APD headquarters at Eighth and I-35.

Police ended by arresting 37 protesters on Saturday night (three others had been arrested Friday), almost all of them young people taken in for obstructing the roadway. In the days since, activists have continued to pore over videos of Foster's shooting, as well as social media posts from Daniel Perry where he expresses apparent interest in attacking BLM supporters. Many are hopeful that José Garza, Travis County's all-but-certain district attorney come January, will prosecute Perry for Foster's murder.