The Austin City Council and the Capital Metro board of directors have reached the next-to-last stop as they steer the Project Connect transit system plan toward Election Station. At a joint meeting Monday, the two bodies voted to adopt a $7 billion "initial investment scenario" that could be financed with an 8.75-cent city property tax rate – separate from the current city levy, and requiring (under state law) voter approval in a tax ratification election (TRE) in November.

That's just under 4% of the current combined tax bill for Austin property owners. As opponents and like-minded folks are already shouting from the rooftops, it's a 20% increase in city taxes, costing most Austin homeowners hundreds of dollars a year. But as the funding stream for a whole new agency – which it effectively will be, as the city and transit authority form a local government corporation to manage Project Con­nect – it's less than those property owners pay now to support Austin Com­munity College or Central Health, largely without complaint.

While efforts to spend more on mobility would seem to run counter to a COVID-inspired belt-tightening for Project Connect, the mood at City Hall continues to back going big.

An 8.5-cent tax rate would generate the $3.85 billion in local funds needed for the scenario (55%, the rest coming from the feds). The additional quarter-cent would be to increase funding for anti-displacement strategies, a priority of many on Council and the Cap Metro board (and especially of those, like Mayor Pro Tem Delia Garza and Council Member Ann Kitchen, who are members of both). A TRE-earmarked rate of any amount, as opposed to a bond program, could also support future operations. City Manager Spencer Cronk has been assigned to work out final details on the financing strategy so that Council can call an election next week.

The $7 billion scenario covers about two-thirds of the full Project Connect system plan as presented in March, just as the COVID-19 pandemic hit. At that time, the plan called for some elements to be part of future phases; by June, the city and Cap Metro had leaned into putting the entire $9.8 billion plan – with a $5.5 billion local share and an 11-cent TRE – on Nov­ember's ballot. As the pandemic has dragged on, the region's economy has remained fragile and its travel patterns have continued to change. In response, the proposal has more or less been reset to where it was in March.

While the entire Project Connect system plan remains intact, the initial scenario drops the north and south ends of the Orange Line (Lamar/Guadalupe/South Con­gress) back to "enhanced" MetroRapid service (e.g., dedicated lanes), from the North Lamar Transit Center to Tech Ridge, and from Stassney Lane to Southpark Meadows. It also turns the Gold Line from Downtown to ACC Highland (along or near Red River), which was BRT in March and had become a rail line in June, down to a MetroRapid line. And the initial scenario includes only three new MetroRapid corridors (excluding the ones above), down from seven.

But the big bones of the plan remain intact – Orange Line on the city's busiest transit corridor; Blue Line from the airport to Downtown via East Riverside and a new lake crossing (and then up the Orange Line); Green Line commuter rail from Downtown to Colony Park; improvements to the existing Red Line; new express bus routes, park-and-rides, and transit centers; and a (slightly smaller) Downtown tunnel and underground stations.

There's also $200 million for "transit supportive investments," half of which was earmarked for anti-displacement initiatives to keep the shiny new trains and buses from gentrifying the working- and middle-class neighborhoods whose residents most need to live near transit. Though it's a small part of the price tag – or, perhaps, because of that – displacement has been a major topic at Cap Metro's community engagement sessions, on the Council's message board, and among callers to the joint meeting. Council's 8.75-cent rate would bring that to $300 million. As Garza noted, she and other backers of the $250 million 2018 housing bond now believe voters would have OK'd more money then, and the need has only grown more acute: "I don't see any other option" than to seek the higher tax rate.

Discussion continues on whether to likewise add to the TRE or call a separate bond election to raise $250 million or more for active transportation and make a meaningful dent in the city's largely unbuilt sidewalk, bicycle, and trail master plans. While efforts to spend more on mobility would seem to run counter to a COVID-inspired belt-tightening for Project Connect, the mood at City Hall continues to back going big. "I believe now is the moment, not despite the fact that this is a challenging time, but precisely because of [those] challenges," Mayor Steve Adler told his colleagues at Monday's meeting. "We need to move forward and be the Austin of our aspirations and our dreams. Now more than ever, we have to begin stepping into our future." 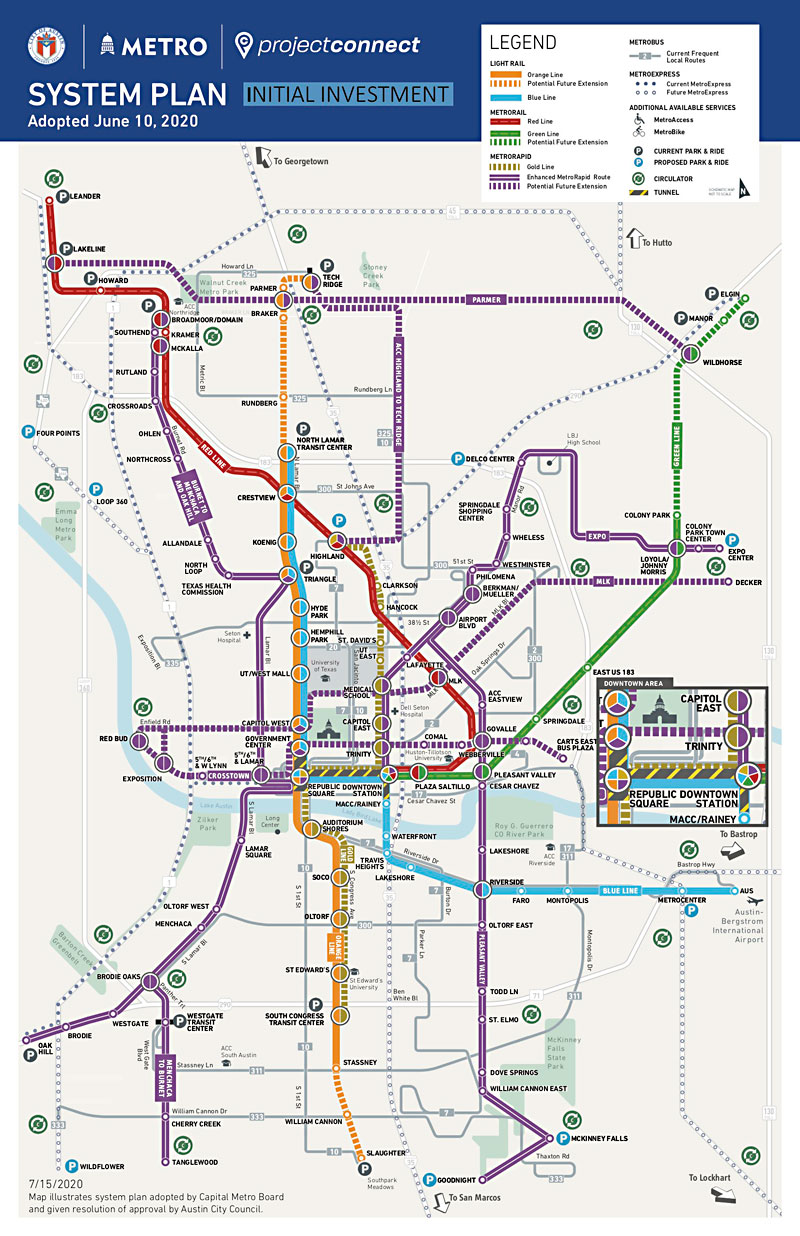 • Two core light-rail lines: The Orange Line along Lamar, Guadalupe, and South Congress, and the Blue Line from the airport to Downtown via Riverside. Both will serve the same route north of Downtown, meaning extra frequency to the UT campus and along the city's busiest transit corridor.

• The proposed $2 billion Downtown subway tunnel and underground stations, as well as a new lake crossing on the Blue Line, remain in the plan.

• The northern and southern extensions of the Orange Line have been put off for now; "enhanced MetroRapid" service will run from the North Lamar Transit Center to Tech Ridge and from Stassney to Southpark Meadows.

• The plan also includes MetroRapid (i.e., dedicated bus lanes) as a placeholder on the Gold Line, from Downtown to ACC Highland along Red River, which is still envisioned as a future light-rail route.

• The MetroRail commuter rail service, which uses existing freight rail right-of-way owned by Cap Metro, will see enhancements on its Red Line to Lean­der and new Green Line service through the Eastern Crescent to Colony Park.