Only a small change, for now 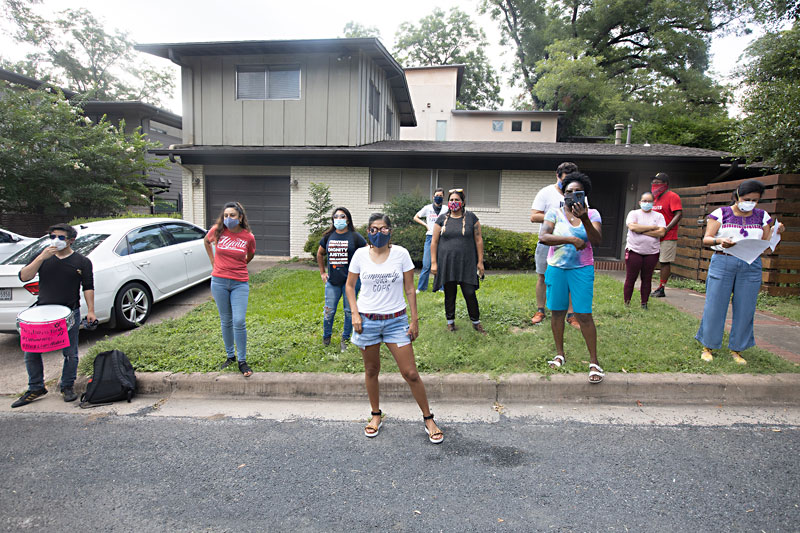 The Austin Police Department has taken an $8.1 million hit, or about 1.9% of the $434 million Council allocated to the department last year, in City Manager Spencer Cronk's proposed fiscal year 2020-21 budget, presented to City Council on Monday, July 13. The reduction falls well short of the $100 million various activist groups have called for, but Cronk says the proposed cuts are only the first step in a multiyear plan to "reimagine public safety."

In total, the FY 21 proposal reduces planned spending on the police force by $11.3 million, but $3.2 million of those savings would be reinvested back into APD; $2.3 million of it would go toward replacing its records management system (a request police officials already made and that the Public Safety Commission endorsed in May), and $900,000 would be used to improve department training.

Both of those proposals respond indirectly to changes demanded by advocates and directed by Council, but their desired shrinking of APD's budget is even further offset by the built-in "cost drivers" common to all departments, notably a 2% pay raise proposed for all employees (and guaranteed to sworn officers by the current police contract). In bottom-line terms, the proposed FY 21 spending plan for APD is only $150,000 less than the FY 20 approved total; it's just $8.1 million (or $11.3 million) less than it would have been had no changes been made.

People “might be surprised by this budget,” lead budget writer and Deputy Chief Financial Officer Ed Van Eenoo told reporters on Monday, “because we’re in the middle of a pandemic and people are expecting a much more austere or severe budget.”

Most of this money is saved by cutting about 100 unfilled officer positions. The department currently has about 70 vacant positions that cannot "reasonably be filled" by the end of the fiscal year; funding for 30 new officers was set aside, over the objections of advocates, in the FY 20 budget. Eliminating these 100 empty seats frees up about $9.2 million. Postponing the July cadet class that would have filled the 30 new slots – as directed by Council in its June 11 package of public safety resolutions – saves another $1.2 million in academy costs and cadet pay. The remainder of the $11.3 million is found by delaying replacement of officers' service pistols, and by transferring Austin Center for Events staff to Development Services.

The city's deputy chief financial officer and lead budget writer Ed Van Eenoo says detailed plans for how to reinvest this money are still being developed. (Cronk says his team had effectively 10 days to come up with its response to the June 11 direction regarding the APD budget.) Around $3 million will likely be allocated to APD governance and oversight – including the Office of Police Oversight and Equity Office, a rewrite of the APD General Orders that regulate officer conduct and further audits of APD policies, procedures, and programs. These recommendations should be ready for Council by Aug. 12, when it's slated to vote on budget adoption.

Van Eenoo says a further $2.7 million in savings will be diverted to improving emergen­cy mental health response. This includes more funding in the city's contract with Integral Care, allowing the mental health authority to expand the scope of its Emergency Mental Health Crisis Outreach Team (EMCOT). It also includes funds to hire seven additional Community Health Paramedics (CHPs), a specialized unit at Austin-Travis County EMS that provides mental and physical health care services to some of the community's most vulnerable residents, like those experiencing homelessness or living with a severe disability.

Combined with funding for CHPs that remains to be spent in the FY 20 budget, this would bring the team – seen by many, along with EMCOT, as critical to any effort to "reimagine public safety" in Austin – up to 26 members. The seven in the new budget are expected to be assigned to field work, where they will help expand the reach of the CHP team by allowing medics to spend more time with clients in more parts of the city. A report by the Meadows Mental Health Policy Institute issued last summer emphasized the importance of reforming how Austin handles such calls, which APD estimates account for about 19% of all 911 calls.

To Cap, or Not to Cap

Overall, the city's General Fund spending is expected to remain flat, at around $1.1 billion, as in FY 20. (APD accounts for 40% of that.) People "might be surprised by this budget," Van Eenoo told reporters on Mon­day, "because we're in the middle of a pandemic and people are expecting a much more austere or severe budget." He chalked this up to the city's strong GF emergency reserves (at least 12% by policy), a city hiring freeze that began in March, and expected partial recovery of the city's hard-hit sales tax collections, which the city forecasts "very conservatively." (That is, they were better than expected until COVID-19 hit, and not as bad now.)

Van Eenoo's team began to develop the FY 21 budget under the 3.5% cap on property tax revenue growth that was supposed to take effect now. Once the COVID disaster was declared, provisions of the 2019 state law freed cities and counties to maintain the existing 8% revenue cap through FY 22. (These percentages refer to the growth in total property tax revenue, not to your individual property tax rate or bill. Under a 3.5% revenue cap, the city's tax rate will actually decline.) Cronk and Van Eenoo did not go to that 8% cap, but Council can set a higher tax rate.

That would not preclude Council also calling a separate tax ratification election for November (or later) to pay for the Project Connect transit expansion endorsed by both the city and Capital Metro. That "once in a generation" project (in Van Eenoo's words) could involve a much larger tax increase – a ballpark figure of 11 cents per $100 has been proposed, which would roughly be equivalent to taxpayers' support of Central Health or Austin Community College.

No amount of fiscal stewardship could forestall COVID-19's devastating effect on travel and tourism, meanwhile, and programs funded by the city's hotel occupancy tax – cultural contracts, historic preservation, and the city's new Live Music Fund – will be cut by about 33%. Some of that blow is offset by the $22.7 million in federal COVID-19 relief funds allocated by Council to small businesses, nonprofits, and creative industries and spaces. The Convention Center and Austin-Bergstrom Interna­tion­al Airport themselves will "be able to manage through this crisis just fine," in Van Eenoo's estimation, even though airport revenues are down more than 40%. (Editor's note: This sentence has been updated since publication.)

In other priorities, the city will maintain its enhanced investment in ending homelessness, putting another $60 million toward the goal in FY 21. About $16.5 million of that will go toward anti-displacement programs that could keep people from falling into homelessness – especially concerning as national surveys show that more than 30% of households missed their rent or mortgage payment in June – along with a $7.7 million transfer from the Housing Trust Fund, also to stabilize housing status. Another $1.6 million will create a new local housing voucher program, while $2.6 million will be invested in cleanups of home­less encampments throughout the city.

See next week’s issue for a deeper dive on the proposed city budget.