What Are the "Next Normals" for Scooters in Austin

The pandemic takes on personal mobility 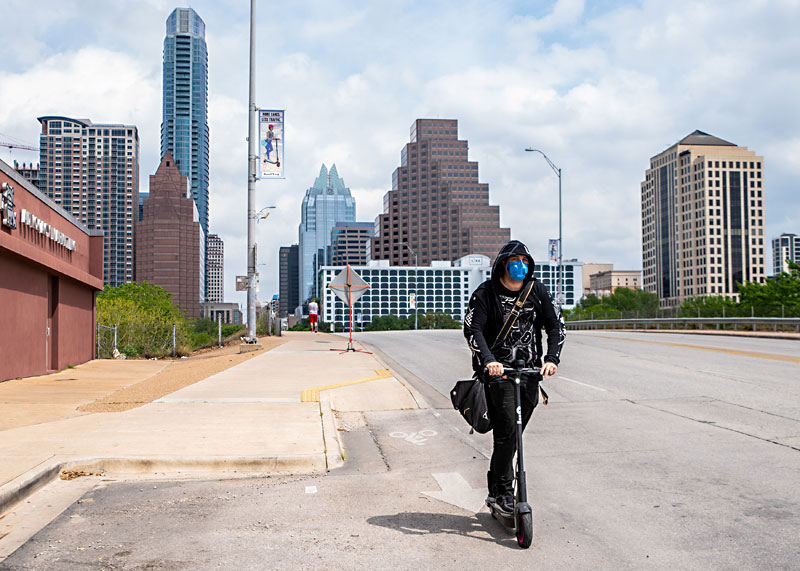 A scooter rider on S. Congress on March 27 (Photo by David Brendan Hall)

Remember the good old days, back in March, when SXSW was just around the corner and it felt like there were about eleventy jillion scooters on Austin's streets? You all remember what happened next, and so do the micromobility companies. Instead of seeing 750,000 rides in March as many had expected (or three times the February total, as had happened in 2019), they ended the month with about 30% of that and headed steeply downhill. In April, there were only 10,551 micromobility trips. By the first of May, eight of the nine companies in the highly competitive and desirable Austin market had pulled their units off the streets.

Back in May, we talked to the one remaining player in Austin – Bird's community relations lead Blanca Laborde – with the intention of writing about a "new normal" for mobility that again seemed just around the corner. "We've gotten a glimpse of what Austin and other cities can look like – fewer cars, safer streets, cleaner air," Laborde told us then. "There are a lot of benefits to personal mobility." That month, there were just under 20,000 trips. "We have a lot of data, so we'll keep looking at that data to adjust our operations to make sure people can get around."

“We’ve gotten a glimpse of what Austin and other cities can look like – fewer cars, safer streets, cleaner air.” – Blanca Laborde, Bird Scooters

We also talked to other firms as they planned their Austin reemergence, some in new guises due to industry shake-ups augmented by the COVID crash. Then more things happened – protests and unrest, reopenings and now re-closings, with masks and without. As it's settled in that we'll be dealing with COVID-19 impacts for months to come, we're seeing one "next normal" after another in quick succession, what Jason JonMichael, who oversees emerging mobility programs at the Austin Transportation Department, describes as "iterative approaches to things as we manage the next, say, 600 days." There are now four companies back on the street, along with Revel's shared mopeds, which are just now starting to see consistent use.

But JonMichael echoes Laborde when he says that, even in this challenging environment, "We're experiencing a renaissance around personal mobility." It's not hard to see why. The fear of contagion may have forced many back into the safety of their cars, driving alone – but knowing that this was unaffordable, inefficient, and environmentally catastrophic in the long run. Transit would need time to adapt to the new realities, which can happen here as it did in Asia after the SARS epidemic. JonMichael says, "There's not an aversion to transit if it's properly administering safety protocols for current conditions," which has been part of Capital Metro's game plan for restoring ridership after being forced to plead with its customers to stay home even as it suspended fare collection.

In this next normal, riding a scooter (or a bicycle, or just walking) seems less like a hip and fun way to recreate and more like a safer utilitarian alternative for trips one needs to take. But finding a scooter in April or May for that essential trip could have been dicey. However, an electric bike from Austin B-Cycle – one of 200 deployed by the community bikeshare in anticipation of SXSW – was waiting right there, along with its fleet of pedal-powered units. Suddenly, the seemingly dowdy and obsolete B-Cycle station-based model, threatened with extinction by the dockless onslaught, was exactly right for the moment: orderly, easy to find, and easy to sanitize.

Accordingly, even as the dockless market went into hibernation, B-Cycle picked up the slack – as of May 1, its ridership exceeded its May 2019 numbers and continued to surge thereafter. JonMichael, whose port­folio includes the city-owned bikeshare (it's operated by the nonprofit Bike Share of Austin), attributes its rebound to the e-bikes, which he says get used about four times as often as a pedal-powered B-Cycle and for trips that are twice as long. The unexpectedly strong performance led the city and Capital Metro to accelerate their partnership plan to include B-Cycle (to be rebranded MetroBike) as one of the transit authority's services.

Those longer trips were also seen on scooters as they slowly returned to the streets – a reflection of "health workers, shift workers, essential workers using micromobility," JonMichael says. The average pre-COVID scooter trip in Austin was 1 mile; the average for June, which saw at least 40,000 trips, was nearly 2 miles, which was down from May's peak of 2.32 miles. Bird offered discounted and free rides to health care workers during this time, as well as featuring open restaurants in its app and working with the city on curb management for the next normal of takeout and delivery.

"We really have a great opportunity here," Laborde told us back in May. "There's never been a better time to discuss how we're really going to get to 50/50," the mode-share target of the Austin Strategic Mobility Plan, with half of all commutes being made by means other than driving alone by 2035. "We hope we can build on existing micromobility programs and invest in the infrastructure we need" – that being transit – "and continue to work with local businesses [as] part of the economic recovery."

Ever since the scooters came to town in 2018, Austin has tried to set itself apart as a test bed for innovation, in partnership with the industry and alongside the full array of emerging modes and technologies that JonMichael keeps ATD's eyes on. "Two years ago, people were moving around the city in different ways than before, and now it's changing yet again," he told us. "It'll go through bumps and starts as we try to reopen, move forward and then pull back, and that will be the next normal. The best thing we can do is keep as many services operating as possible, and keep as much data as we can to help those companies understand where they can get riders or help enable the trips we have."

A version of this article appeared in print on July 10, 2020 with the headline: Scoot On Back!