Right Now, COVID-19 Is “Spreading Quickly in an Uncontrolled Fashion”

All of a sudden, is it too late? 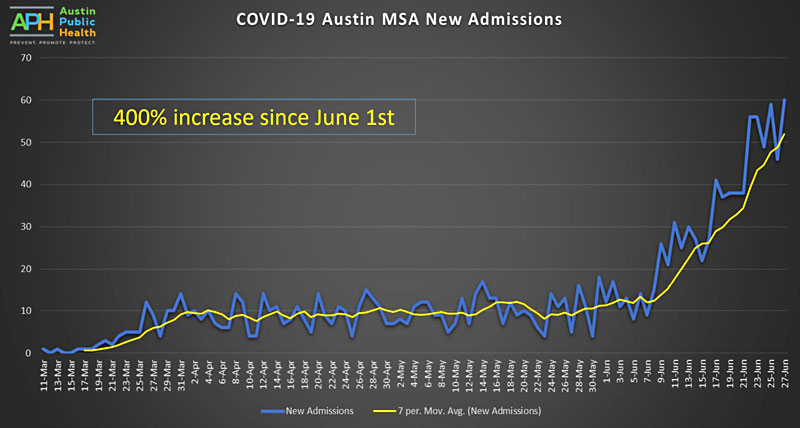 Daily hospital admissions in the Austin MSA have surged in recent weeks.

Three months after Austinites brought the metro area's rate of COVID-19 transmission down to nearly zero – amid an economically devastating lockdown – the disease caused by the novel coronavirus is now "spreading quickly, in an uncontrolled fashion," says Austin Interim Health Authority Dr. Mark Escott. He was reporting to City Council at a special called meeting on Monday of his discussions with the White House's coronavirus task force (and its leader Dr. Deborah Birx) and the Texas Department of State Health Services – all of whom "had some agreement ... that we simply cannot continue to do things the way we have been doing them."

That could include returning to shelter-in-place conditions if residents and businesses do not choose to stay home and stay closed, and only venture out when necessary with masks, distancing, and hygiene protocols being strictly followed. For now, it definitely means rationing COVID-19 testing resources that are once again scarce, as public test sites operated by Austin Public Health and CommUnityCare are overwhelmed. (The two announced Wednesday that patients with insurance should seek tests through their existing medical providers, and only when showing symptoms of the incurable and potentially fatal illness.)

Given the unpopularity and political volatility of another shutdown – which public health experts remind us was intended as a one-shot crisis measure to buy time to get closer to a cure or vaccine – state and local officials are still hoping it's not too late for people to get with the program. What should and could have been, but is not, currently in place is what's called a "TETRIS" regimen – testing, tracing, and isolating.

The failure of Gov. Greg Abbott's plans for the state to outrun COVID, and of the White House to stay focused on the pandemic rather than the election, has left a Texas TETRIS strategy that's similar to the namesake game, with gaps that are nearly impossible to fill as new blocks of infection keep raining down. Along with Austin Regional Clinic, APH and CUC had been providing the most broad-based and large-scale testing of the population, with more than 11,000 tests conducted June 21-28. Of those, 9.5% came back positive, a rate that had crept up from previous week-to-week metrics; the positivity rate was higher for African Americans and still higher for Latinx populations, at 15.2%.

Other metrics reported to, and repeated by, the White House task force showed the Austin metro area with a 22% positivity rate, reaching 33% in Caldwell County. These eye-popping numbers reflect anomalies in who is tested and when and how results are reported, and may be artificially high; in any event, even a 9.5% positivity rate is above a level that would signal that COVID transmission was being controlled, and it's not going down.

Escott and APH Director Stephanie Hayden reminded Council that positive test results come into APH, often days later, via fax and have to be manually re-entered. "This is not acceptable," Escott said, though the prospect of a fully electronic, shared data platform seems to still be distant. The same is true of contact tracing – local resources at APH and in other cities are overwhelmed, and the state's Texas Health Trace platform is just now being launched, again requiring manual entry of data from existing systems (APH uses Salesforce to handle what is effectively a customer management system).

The metro area's three major hospital chains – Ascension Seton, Baylor Scott and White, and St. David's HealthCare – issued a joint statement saying that their facilities were 72% full as of Tuesday, with 80% of intensive care beds in use. Those numbers themselves did not alarm Escott – it's the rate of change in hospitalizations, as with the positivity rate, that signals we are heading into the sort of stress on the health care system seen in places like New York and Milan earlier in the pandemic.

To wit: Some slight good news emerged with the latest modeling from UT-Austin's COVID-19 team led by Dr. Lauren Meyers, who also addressed Council Monday; the benchmarks established for each stage in APH's risk-based guidelines (we're at Stage 4, orange) appear to have been set too low. But the extra leeway that would have given the community is fast being consumed; new daily hospital admissions for COVID, the key indicator in those benchmarks, have increased 400% since June 1.