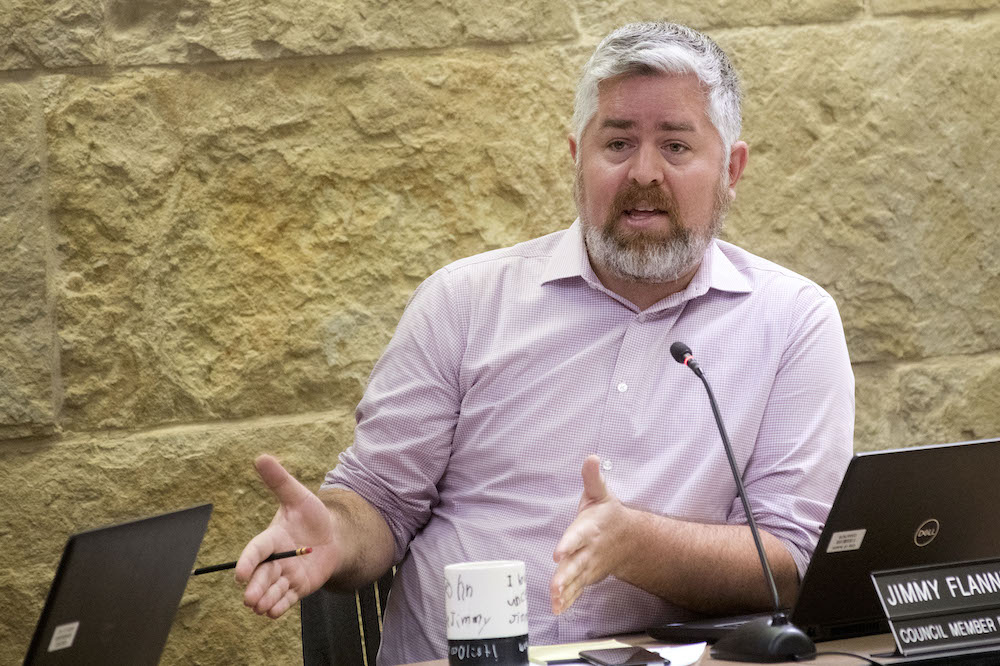 On the eve of early voting for the July 14 elections, Austin­ites were reminded that more elections are fast approaching this November. On Sunday, District 6 City Council Member Jimmy Flannigan took to the virtual realm to formally launch his reelection bid.

In the Zoom kickoff – emceed by Survive2Thrive Founda­tion CEO Courtney Santana, and attended by state Rep. John Bucy III and CM Natasha Harper-Madison – Flan­ni­gan repeatedly emphasized an uncommon-times-call-for-uncommon-measures refrain as central to his visions of police reform and public safety, transportation, and COVID resources and support. "Now is the time for an uncommon approach," he said, "a bold and exciting vision that includes every part of this community in pursuit of safety, mobility, and health."

As chair of Council's new Public Safety Committee, Flannigan called it his "solemn responsibility" to lead Austin through police reform. Flannigan – among several CMs who have called for police Chief Brian Manley's resignation over the Austin Police Depart­ment's response to ongoing protests against police brutality and racism – proposed a plan to replace the chief's role with a "council of police commanders representing the five APD regions" across Austin. "As a team with an appointed civilian police commissioner, they would better reflect our sprawling city with the same demographically and geographically diverse perspectives of our 10-1 Council," he said, calling the proposal a "first" in Texas.

For Flannigan's Northwest Austin district, traffic and transportation issues remain important: "It was clear when I was elected in 2016 that this was not just Dis­trict 6's main concern; for many, it was their only concern." While he cited "tens of millions of dollars" in transportation projects approved for D6 since then, he looked beyond road building to the proposed Project Connect overhaul of local transit, which Austinites are also expected to vote on in November.

"One of the friends or buddies of [former D6 CM] Don Zimmerman, a voice from the past that just won't go away ... is running this year," said U.S. Represent­a­tive Lloyd Doggett, who joined from D.C. to introduce Flannigan. He was referring to Flanni­gan's declared opponent, conservative (and Zimmer­man­-endorsed) Mackenzie Kelly, president of Take Back Austin. Doggett continued, "None of this, even despite Jimmy's great service, despite his big victory last time, can be taken for granted."

Zim himself is running in the Texas Senate special election to succeed Kirk Watson, after having failed in March to make the GOP run-off – by one vote – in House District 47. At City Hall, Districts 2 (currently represented by Mayor Pro Tem Delia Garza), 4 (CM Greg Casar), 7 (Leslie Pool), and 10 (Alison Alter) will also see elections this November; other than Gar­za, who's in the run-off for Travis County Attorney, all the incumbents say they're seeking new terms. The filing period for Council races runs July 18 through Aug. 17.