AISD Hears Loud and Clear: No Cops in Schools

Austinites call for schools to defund its police, too As it prepared to approve the district's $1.65 billion budget in late June, the Austin Independent School District Board of Trus­tees heard from nearly 100 members of the public asking for the district to defund its police department. That demand comes as the nation faces a racial reckoning with how police officers have treated Black people after the murders of George Floyd, Breonna Taylor, and others, and here in Austin, the killing of Mike Ramos.

Over the past month, protesters nationwide have rallied for defunding police forces – including those in public schools, to allow more resources to be directed toward students' emotional and mental health needs. Minneapolis, where Floyd was killed, was the first school board that voted to terminate its relationship with the city's police department earlier this month. Portland Public Schools soon ended its contract with their police department, followed by Seattle and Denver Public Schools.

At the AISD Board meeting on June 22, which lasted until 3:32am, trustees heard one-minute voicemail messages from members of the public providing comment. A majority of those referenced Austin Justice Coalition's six resolutions that asked the trustees to not add school resource offi­cers in the 2021 budget and eliminate vacant SRO positions; to reallocate policing funds to culturally responsive restorative practices; and to provide transparency by publishing budget, policy and data information online.

The AJC also demanded that the board create key performance indicators for AISD Police to track its efforts to reduce disproportionate and unfair disciplinary actions against students of color that lead to the school-to-prison pipeline. "If policing is unjust on the streets, then of course it is unjust in our schools," said one caller.

"I know most of the schools in AISD have a police department dedicated and have a police unit on campuses," another said. "The way that it is structured today is unnecessary and truly a waste of our funds. We should have classrooms that are well-funded and students that have access to all they need, rather than dedicating all of [this] money to the police."

Responding to the several testimonies, Trustee Cindy Anderson noted that AISD Police is in-house, as are those of some other Central Texas districts that have cut ties with their cities' local law enforcement. Anderson did agree with community members that the district could update its website to include the department's budget, policies, and a racial profiling report, but highlighted the importance of AISD Police's roles within the district.

"Our officers have a great deal of training requirements with respect to cultural proficiency, diversity training, restorative practices, mental health – a significant number of hours that I understand to be very different from the requirements of other law enforcement agencies," Anderson said. "I think it's important to share that information."

Anderson said the district invests more in mental health, social-emotional learning and restorative practices combined than in law enforcement – approximately $10 million for the former programs and $9 million for AISD Police. The latter funding was not included in the budget the board approved in the early hours of June 23. "We have some things that we need to continue to work on; we're not perfect," Anderson said, adding the board intends to have "ongoing discussions" of needed policy and process changes, and then of "the staffing needs [that] are associated with those changes."

“We have some things that we need to continue to work on; we’re not perfect.” – AISD Trustee Cindy Anderson

Outgoing Superintendent Paul Cruz, set to join the UT-Austin education faculty, asserted that he sees districts across the country also following AISD's approach of investing in their own workforce rather than contracting with local police. "We want our police departments to recognize our students as individuals, to recognize student voices and develop positive relationships with our students," Cruz said. "We actually do training and development in those specific areas for our police officers."

However, Austin is not really on the leading edge of these issues; while the Round Rock, Manor and Del Valle school districts all voted last year, before the current protests, to move policing in-house, several districts across the country have either removed or are considering removing police officers from schools altogether.

Many of these school districts cite studies that show school resource officers actually don't keep students safe. Two years ago, UCLA assistant professor Emily K. Weis­burst published a study of the impact that school police officers have on student discipline and education in Texas. She discovered that federal grants for police officers in schools were correlated to higher discipline rates in middle school as well as for low-income, Black, and Hispanic students.

On June 9, several of the state's community advocacy groups – including The Child­ren's Defense Fund Texas, Disability Rights Texas, Texas Appleseed, and the Earl Carl Institute at Texas Southern Uni­versity – wrote a letter to Cruz calling for divestment from policing in schools, citing incidents in Austin involving students and AISD Police. In one example, from Bedi­chek Middle School in 2016, the Austin American-Statesman reported that a district police officer got into a scuffle with an eighth-grade student who was removed from class for disruptive behavior. The officer was indicted on felony charges and ordered not to work with children for five years.

According to the AISD website, the district employs 84 full-time police officers – 43 SROs, 20 patrol officers, and two mental health officers. Two SROs are stationed at each high school, one at each middle school. 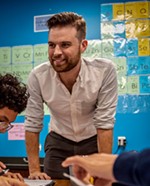