Manley Holds On as APD Chief – for the Moment 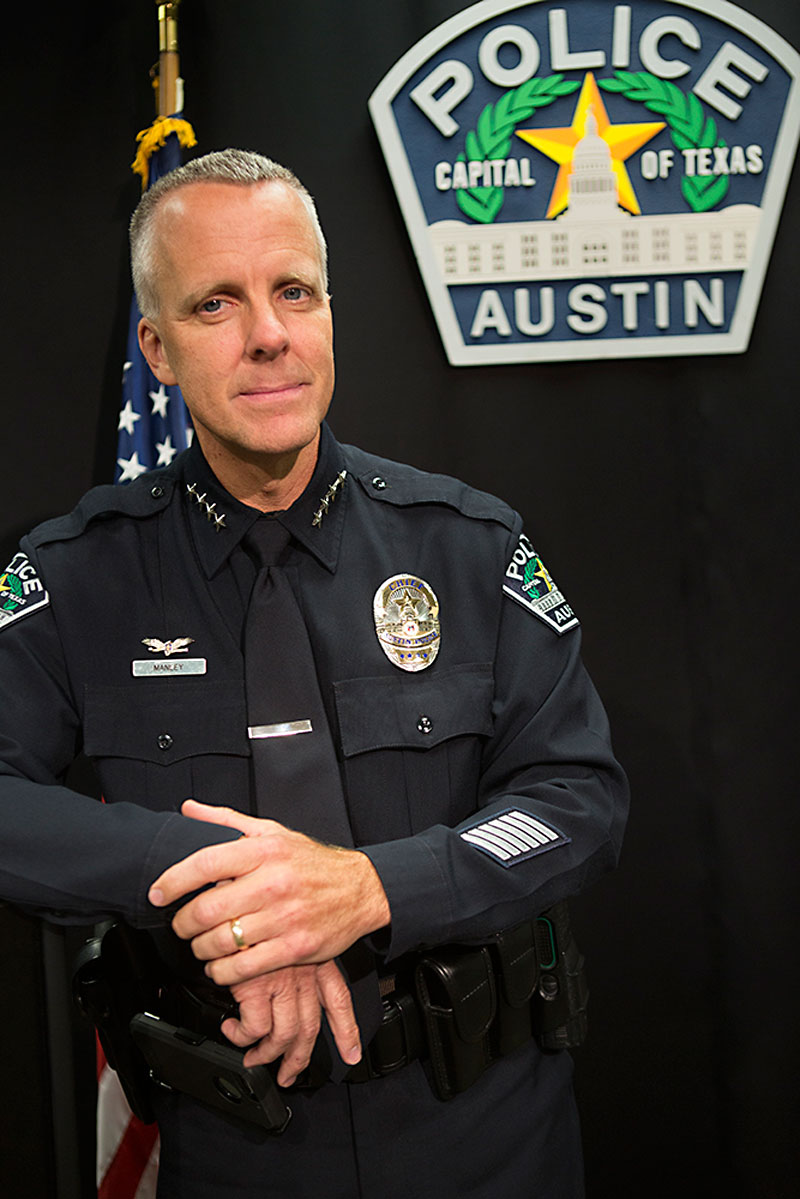 Brian Manley will stay on as Austin's police chief – for now. City Manager Spencer Cronk made that clear at the first meeting of City Council's Public Safety Committee June 11, in his first remarks directly addressing growing calls from council and the community that the Austin Police Department needs new leadership.

"I've had many pointed conversations with [Manley] over the past several weeks," Cronk told Council. "I assure you that both Chief Manley and the entire public safety team are committed to this transformational change and as we move forward, we will uphold everything that we need to do to move forward in that manner."

That statement of confidence has done little to quell the calls for Manley's resignation, especially from the activist groups who have led that charge publicly since APD Officer Christopher Taylor fatally shot Michael Ramos on April 24. On June 19, the Austin Justice Coalition sent an email to supporters encouraging them to continue the pressure campaign, with a new allegation included to fuel calls for his ousting.

APD had announced it would release a narrative "critical incident video" for the Ramos killing on Monday, June 22 – the deadline for publishing such a video, per the department's new policy outlining how body-cam and dash-cam footage from such incidents is released. According to AJC, that video was produced without the involvement of the Office of Police Over­sight – a vital aspect of the policy that they fought for to keep APD honest. According to city spokesperson David Green, APD "mistakenly" left OPO out of the loop and planned to show OPO Director Farah Muscadin the video on Friday.

"[OPO] should have also been included in the production group itself," Green said in a statement. "Our focus at this time is producing a video for public release in accordance with new policy. Once complete, we'll begin reviewing and refining our processes to ensure a smoother implementation of the policy for future critical incidents." A timeline for when a Ramos video will be released has not been set.

For justice advocates, the exclusion of OPO was no mere mistake – but yet another episode in a saga of subtle and overt subversion, tolerated if not propelled by Manley, that undermines the Council's commitment to police accountability. The critical incident video policy emerged after 17 months of work among APD, OPO, and community organizers; OPO's involvement is a central pillar of the policy, and APD leadership simply forgetting to involve the office in the Ramos video is tough to swallow.

A majority of Council – Greg Casar, Delia Garza, Jimmy Flannigan, Pio Renteria, Paige Ellis, Leslie Pool, and Alison Alter – have all said publicly and directly that APD needs new leadership. Their reasons predate the Ramos killing and the mishandling of the subsequent protests: Manley's open defiance of Council efforts to reduce arrests and citations for possession of marijuana, his skepticism of an OPO report that showed racial profiling by APD officers had worsened over the past five years, and his failure to investigate former Assistant Chief Justin Newsom over a documented history of racist comments. The Ramos shooting, the life-threatening police violence against protesters – after APD responded without force to "Open Texas" rallies weeks earlier – and now suspicions about the Ramos video just add to that list.

Members are considering what role Council should play in this debate, and perhaps more importantly, what would happen if and when Manley steps aside.

So, why have the four others – Mayor Steve Adler and CMs Natasha Harper-Madison, Kathie Tovo, and Ann Kitchen – refrained from calling on Manley to resign? Each has their own reasons, but all are considering what role they think Council should play in this debate, and perhaps more importantly, what would happen if and when Manley steps aside.

Per the city charter, Council cannot fire Manley directly, though it approves police chief appointments made by the city manager (whom it can fire). State civil service law, at least as the city's lawyers read it, only allows Cronk to demote Manley, though it's hard to imagine the chief wouldn't tender his resignation if that happened. Some on Council have taken this further and feel they need to stay completely out of personnel decisions made by Cronk, though clearly that's not a consensus view.

"I don't have any say in removing Manley as police chief," Harper-Madison told us recently. "I want to focus on the things we can actually do something about. We keep having these bad apple conversations, but we aren't talking about how the whole tree is poisoned," she said of the broader goal of a systemic transformation of policing in Austin. Harper-Madison added that she's focused on the "emergent needs" of the communities she represents – which gets at the "what next" part of the calculation. "The conversation around leadership and our city manager taking a strong stance around policing leaders is important," she told us, "but I'm thinking about fighting food insecurity. We all have a limit in bandwidth, and I just don't want to see any more people go hungry or without housing."

Having led the charge on Council to uproot ingrained cultural issues of racism, sexism, and homophobia at APD since last year, Harper-Madison sees a complex reality in which Manley's resignation would leave multiple problems unsolved and perhaps more challenging. An interim chief would need to be named; most of the options within APD are likewise tainted by what the Tatum Report spawned by Newsom's case called "real cultural issues that are in need of attention." (Manley's No. 2, Chief of Staff Troy Gay, has also been urged to resign by advocates.) Outside options for a quick selection of an interim chief are likely to be a small pool of former law enforcement leaders, themselves creatures of the system that needs to be broken down and rebuilt.

Then would follow a search that must be national, and perhaps even international – more thorough than any police chief recruitment before, with more community engagement and staff resources than ever, at a time when both are also urgently needed to tackle the COVID-19 pandemic. Even if both can be done at once, as seven CMs believe, it's naive to think either would be done as well or as efficiently as Austin needs.

That's assuming APD will and should have a single sworn chief of police that reports to the city manager. A transformational reform may change that – a civilian police or public safety commissioner that oversees a sworn No. 2 and reports directly to Council? (That would take Cronk's team, including Assistant City Manager Rey Arellano – who's also been urged to resign as part of regime change – out of the chain of command.) Or maybe police reform becomes the engine that drives a charter change to a strong-mayor government, as in Houston, where Manley's predecessor Art Acevedo reports to Mayor Sylvester Turner?

These would have seemed far-fetched ideas even a few months ago, but Council is taking seriously the mandate to "reimagine public safety." That will guide its work over the next few weeks as Council debates and adopts a budget for Fiscal Year 2021, which is expected to include a substantial divestment from APD and catalytic reinvestment into policing alternatives.

"If [Cronk] is successful in leading the reform of the police department that we tasked him with," Pool told us, "that would include appropriate leadership. But we don't yet know what leadership will look like or what skill set will be needed." Priv­ate­ly, City Hall chatter expects Manley to resign or be demoted after the budget is approved, sometime between October and January – long enough to come up with answers to the uncertainties Pool describes. (And also overlapping a Council election cycle in which she, Alter, Casar, and Flan­ni­gan are all running for reelection.)

If that doesn't happen, the next step is to "hold the city manager accountable" – presumably by replacing Cronk. While the manager, unlike the chief, still enjoys Council confidence in his ability to transform APD, in a recent interview Adler didn't rule out the possibility of finding someone new. "We have to take advantage of this once in a generation opportunity to reimagine policing," the mayor told us. "Not just through implementation of policy, but as something that our leadership wants to do and wants as their legacy. My focus is delivering that result in this moment, and I hold the city manager responsible for getting it done."

"If this is something that he can't achieve," Adler continued, "then he's not the city manager that the city needs. But he has said he understands the charge and the will of the community and of the council and he will get that work done."