How Did a Weeks-Old Justice Advocacy Group Catch the Ear of Police? 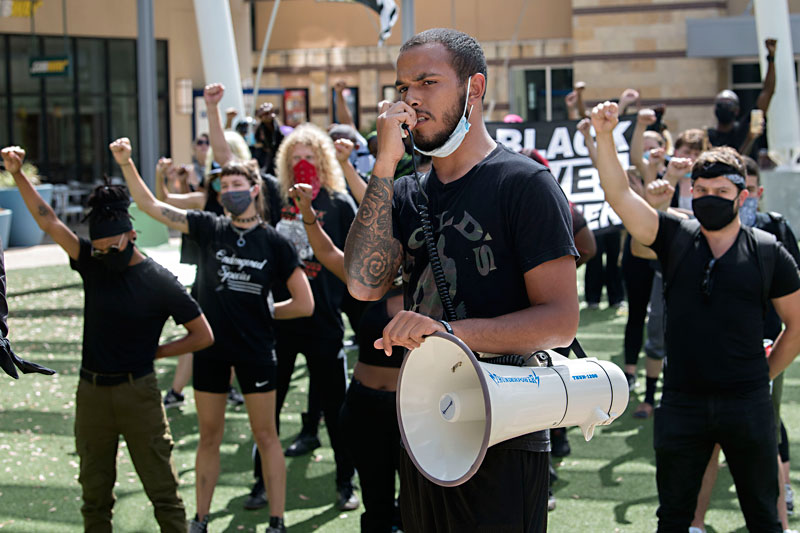 When members of a group calling itself JUST America were brought onstage for a June 11 press conference with Austin Police Department Chief Brian Manley to announce a suite of policy reforms the two entities had agreed to, the reaction from most people who watch local politics closely was, "Huh? Who?"

JUST America's co-founders, Michael Bar­nett and Eric Lee Brown, admit that they only recently came together to establish the group after having met on the streets of Aus­tin at demonstrations against police violence. They have no connections to the criminal justice reform groups, such as the Austin Justice Coalition, that have worked in the city for years at reforming the police department, and it appears Barnett and Brown have made little effort at forming relationships with those groups.

Still, they somehow managed to land a meeting with Manley, at which they apparently convinced the chief to agree to a few policy reforms, including a ban on chokeholds. That concession proved mostly meaningless, as a viral video showed an APD officer putting his knee to an individual's neck before arresting him just a few days after the chief told City Council his officers would no longer do that, but the fact that JUST was able to meet with Manley despite having no track record of advocacy in the city raised alarms for others.

Since then, the theories on what JUST is have ranged from the slightly paranoid idea that they are actually APD plants working on behalf of the department to disrupt the push for transformational change from established criminal justice advocates, to the more likely idea that they are simply well­-meaning people, concerned about police violence, who were co-opted by department leaders in an effort to push an alternative, watered-down version of police reform.

As Brown explained to the Chronicle, he and Barnett were able to meet with Manley after chatting with Officer Jeremy Bohan­non about reform at a protest (Bohannon introduced the group at the June 11 press conference). "I was just another person at the protest who had a vision," Brown told us. "We had conversations with officers who shared some of the same sentiments we did" – Bohannon being one of them – "and that led to the meeting with Manley."

Text messages between Barnett and APD Detective Randy Dear, obtained by the Chronicle through an open records request, show the extent to which Dear went to court a relationship with Barnett. "Let me know if I can do anything to help facilitate communication between our groups," Dear wrote in his first text to Barnett. "My prayers are that this communication continues to foster a relationship that we can make changes together."

In other messages, Dear praises JUST for "keeping it peaceful" at protests and repeatedly makes offers to meet or help the group. "Dude I have goosebumps about this all coming together," Dear writes at one point, showing an unusual level of enthusiasm for a group that has no history of success in reform efforts, nor any connections to groups that have succeeded.

The fact that Brown and Barnett have communicated with officers is not unusual (AJC Executive Director Chas Moore tells us he often does the same, though his group is not meeting with APD until the department has new leadership), but the eagerness officers have shown to connect JUST with APD leadership is. "I've never had any of them look out for me that way," Moore tells us after reading a text from Dear to Barnett, in which the detective is checking in to make sure members of JUST made it home safely from the previous night's protest.

Veteran activist Scott Henson said, “Distraction is too mild a word” for what JUST America has done for the conversation on police reform thus far. “‘Misinformation campaign’ is more like it.”

It's unclear what role JUST will play in the impending fight over police reform. Brown tells us they're still organizing (but, he notes, they're eyeing other policy areas and don't want to just limit themselves to change in Austin; "That's why we're JUST America and not JUST Austin"). They still have not connected with AJC, Just Liberty, or other established justice advocates.

Veteran activist Scott Henson of Just Liberty said, "Distraction is too mild a word" for what JUST has done for the conversation on reform thus far. "'Misinformation campaign' is more like it. It's a bait and switch, a hijacking, a theft. It's an effort by Manley and APD to rob the public of an opportunity to create real change – a gambit to provide political cover for reform opponents."

If that's the case, Manley's gambit hasn't paid off much. Just a week after joining the chief on stage to announce reforms, JUST America issued a public call for Manley to resign.

A version of this article appeared in print on June 26, 2020 with the headline: JUST Helping Out?