Texas Democrats Take Vote by Mail to the U.S. Supremes 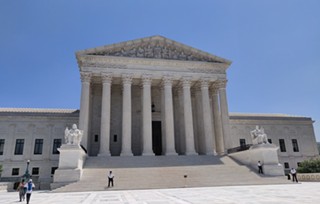 On Tuesday, the Texas Democratic Party and three under-65 voters filed motions to the U.S. Supreme Court, requesting that all Texas voters be allowed to vote by mail. One voter-plaintiff, San Antonio nurse Brenda Li Garcia, called the state's current age restriction "arbitrary, discriminatory, and unconstitutional."

Attorney Chad Dunn, general counsel for the TDP, said (via an online press conference) that the filings ask Justice Samuel Alito (who oversees the U.S. Fifth Circuit Court of Appeals) to lift the current stay of a lower federal court order, issued May 19 by San Antonio Judge Fred Biery, that would allow VBM under pandemic conditions to all Texas voters. Failing that, Dunn said, the Court has been asked to expedite consideration of the constitutional merits of the plaintiffs' suit: Most specifically, that the 26th Amendment (which enabled those 18 and older to vote) explicitly prohibits discrimination against voters on the basis of age.

Last week, the TDP withdrew its state lawsuit concerning VBM, effectively mooted by a May 27 Texas Supreme Court ruling that "lack of immunity" to COVID-19 alone does not constitute a "disability" under the state election law. On June 4, the Fifth Circuit Court extended its stay of the Biery order, in a lengthy order that Dunn noted took the unusual step of deciding the merits of the case in advance of any hearing, while also insisting that the plaintiffs should have waited for the Texas Supreme Court decision.

"There is now no need for any further action [at the Fifth Circuit]," said Dunn, especially considering the election schedule and an earlier Supreme Court ruling (in a Wiscon­sin case) that procedural changes shouldn't be made "on the eve of an election." Dunn hopes that either Alito will quickly lift the stay, or the full court will hear the case soon enough to anticipate the Texas July 2 mail ballot request submission deadline – or at least to liberalize the rules before November.

"It can't be true," added Dunn, "that we're both too soon, and too late." He said Texas has become an "outlier" on VBM, one of very few states that have not moved to liberalize VBM in the context of the worldwide pandemic. As with the late June­teenth announcement of the Emancipation Proclamation, Dunn said, "Texas is one of the last states to get the message" on the effects of the 26th Amendment.

The three plaintiffs – Garcia, Shanda Sansing, and Joseph Cascino – each spoke briefly on their reasons for participating in the lawsuit. Sansing, a 60-year-old Austinite, said she fears exposing herself and indirectly exposing vulnerable relatives to COVID-19 infection; Cascino, a 20-year-old UT-Austin student, said he understands he's "putting a target on his back" for Attorney General Ken Paxton, who has threatened prosecution of "illegal" use of VBM. "We should honor the blood, sweat, and tears" of those who fought to defend and expand the right to vote, Cascino said. "Paxton should extend a helping hand, not a middle finger."

Dunn dismissed claims of widespread voter fraud with VBM, and that if they were true, then nobody – not the elderly, absentees, nor military personnel – should be allowed to vote by mail. He said he does not believe that the attorney general has the authority to prosecute alleged violations, and that voters shouldn't have to fear that local district attorneys might decide to pursue such claims. "Voters over 65 don't have to worry about that, and young voters shouldn't have to guess whether they'll be prosecuted."