An unprecedented surge, but will it lead to consequences for officers? 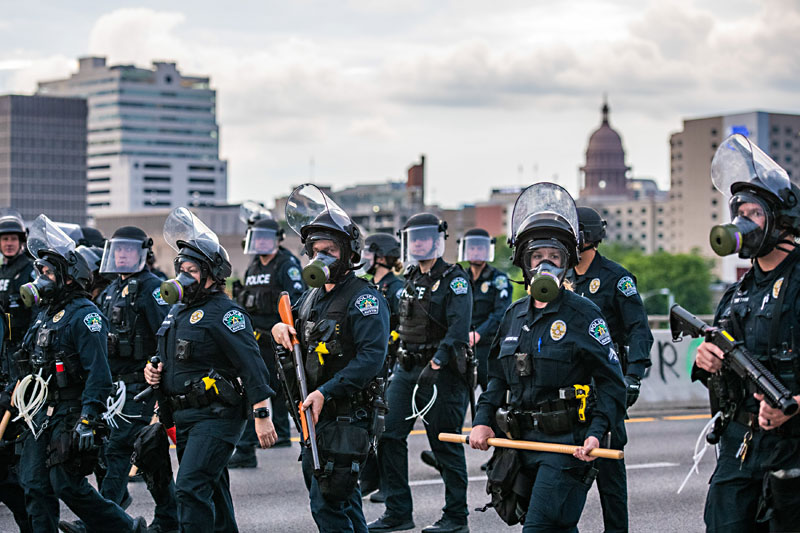 Nearly 900 complaints were submitted to the Office of Police Oversight over the Austin Police Department's treatment of protesters during the wave of demonstrations against police violence June 1-10. OPO has formalized 227 of the complaints, sending them over to APD's Internal Affairs division to be reviewed and potentially investigated.

That number represents an unprecedented surge in use of Austin's civilian complaint process, OPO Director Farah Mus­ca­din said; her office and its predecessor, the Office of the Police Monitor, received 50 complaints a year, on average. Taken together, the June complaints paint a picture of Austin police officers showing wanton disregard for the safety of citizens they were sworn to protect.

Many of the complaints reference the shootings of Justin Howell, Brad Levi Ayala, and Saraneka Martin, each injured when officers shot them with lead-pellet bags (Howell and Ayala were hospitalized with critical injuries; Martin is pregnant and was shot directly in the stomach, though she reports that her baby is fine, for now). Other redacted complaints tell the stories of people who felt threatened and disrespected, and in some cases were attacked, by officers.

"Someone had just been hit in the head with a rubber bullet or other projectile fired by police, and I was headed in the direction toward the people helping him," a complaint filed June 3 reads. "Unprompted, another hail of rubber bullets rang out. I began running to get away and was hit on the left side under my arm by a police officer who had shot from above ... which is a sentence I never thought I'd write in my life."

Another complaint, from June 1, says "an APD officer ... lunged at a young woman who was standing about a foot away with her hands up. He then proceeded to take her possessions out of her hands and use them to push her back, along with his bicycle. He then made threatening remarks about using force and weapons against her. Moments later she was shot with a rubber bullet."

The publication of the complaints reflects the new levels of transparency won by activists and City Council in the last round of negotiations with the Austin Police Assoc­i­a­tion. Whether accountability will follow, with disciplinary action taken against officers involved, remains uncertain. It is not clear, as we go to press Wednesday, June 17, how many complaints APD Internal Affairs would investigate; the department's recent history suggests they will move slowly.

The publication of the complaints reflects the new levels of transparency won in the last round of union negotiations. Whether accountability will follow, with discipline for the officers involved, remains uncertain.

On June 4, Police Chief Brian Manley announced that 10 incidents were being looked into by the Special Investigations Unit – which handles officer-involved shootings and deaths or injuries in custody – for potential policy violations, and emphasized the seriousness with which he and APD were taking the violent outcomes of their actions against protesters. Two weeks later, the department still has not released any information on those investigations. In a statement, an APD spokesperson told us the SIU "is still investigating the Level 1 cases that occurred over the first weekend of protests. There is no timeline as to when the investigations will be completed."

The incidents described in the complaints helped spur Council's actions last week to change APD policy guiding how officers respond to civilians who do not pose a threat. At the June 11 Council meeting, Manley addressed the use of chokeholds and strangleholds, which were expressly prohibited in Council Member Greg Casar's resolution. The Chief told Coun­cil that the use of those tactics has not been taught or authorized for decades, though they were not explicitly prohibited in department policy, which he said would change.

The following night, an Austin police officer was caught on video with his knee to the neck of Jarrid Cornell, who was later arrested for obstructing a highway. APD says the incident is under investigation, but the officer involved has not been identified. Cornell's attorney, Marc Chavez, told us the incident represented a "disconnect" between Manley and his officers. "The Chief made the right decision in changing the policy," Chavez said, "but the public expects that officers will fall in line with their chief and frankly, this weekend there was a failure to do that."

Casar agrees his reforms will only be useful if officers who do not abide by them face consequences. "A rule is only as good as the enforcement and accountability behind it," he told us. "We've got to create a new culture and practices for public safety, which sets new expectations. We now have the policy changes in place to do that, but there is still more work to do to make sure those changes become protections for people."

Between May 29 and June 10, the Office of Police Oversight was contacted 895 times regarding complaints against the Austin Police Department. The OPO has recommended 227 of these policing complaints for formal investigation, and published them on their website by the day they were processed: June 1, June 2, June 3, June 4, June 5, June 8, June 9, and June 10.