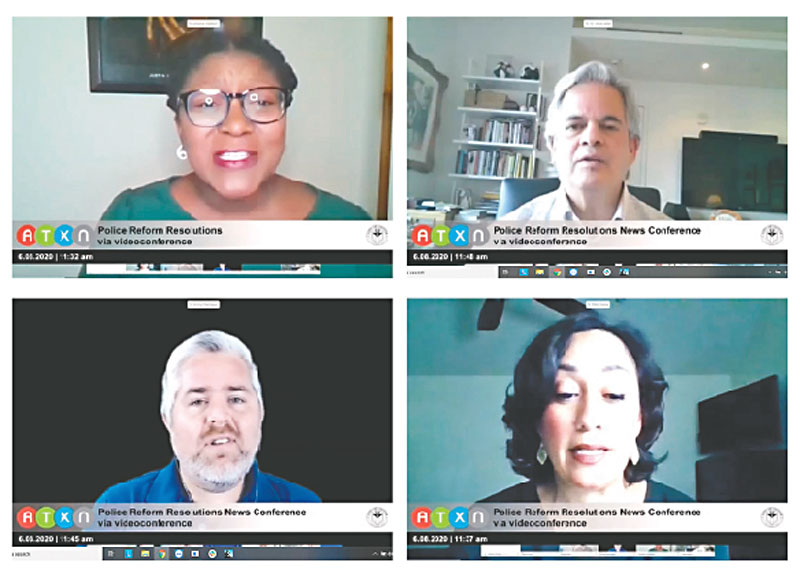 City Council is poised to approve a package of police reforms today, Thursday, June 11, in the first substantive policy response to the last two weeks of protests and their accompanying police violence.

The four resolutions being carried by the four members of the Council Judicial Committee – Greg Casar, Natasha Harper-Madison, Jimmy Flannigan, and Delia Garza – each tackle a different piece of a reform strategy for the Austin Police Department. In a rare occurrence, the remaining council members are all listed as co-sponsors on each, a move intended to demonstrate Council unity.

Of the four, Harper-Madison's resolution, Item 96, has the potential to be the most transformative, as it specifically calls for a reduction in APD funding in the fiscal 2021 budget. That includes reallocating funds for unfilled sworn officer positions – including the 30 new officers secured by the Austin Police Association in the FY 2020 budget – to a variety of social services and criminal justice diversion programs.

APA President Ken Casaday says APD currently has about 200 officer vacancies; this is in part because of a hold on cadet classes prompted by the fallout from revelations of entrenched racism and sexism in APD's top ranks. So in this case, "defund the police" really means "reduce excess, unused police funding." The resolution also directs City Manager Spencer Cronk to explore ways other city departments and outside entities can take on public safety roles currently filled by APD.

The cost of staffing a police officer varies by rank and length of service, but a newly sworn officer costs the department $94,281 per year in salary and fringe benefits, plus the cost of patrol vehicles, radios, weapons, and other equipment. That means the specific reductions outlined in Item 96 would redirect at least $20 million from the police department toward mental health services, housing assistance, violence prevention, and other responses to the root causes of the problems that police officers are called on to confront, though they are ill-prepared for most of them.

That $20 million figure represents about a 4.5% reduction to APD's $441.7 million budget (itself about 40% of the city's overall general fund budget, supported by taxpayers). Activists and CMs agree that is not enough to transform policing in Austin in the ways the community wants to see. The Austin Justice Coalition is already pushing for a $100 million (roughly 22%) reduction to the APD budget.

"I believe a thorough assessment of every single, solitary line item in the [police] budget and an analysis of the true costs of [policing] to the city ... would help us to determine a number that would be less, or even more than the proposed $100 million dollars," Harper-Madison told reporters at a June 8 press conference.

A 22% decrease sounds drastic, but it actually represents a reset to the level of per capita spending on police seen a decade ago – when the total crime rate in Austin was higher. Analysis from local policy wonk Julio Gonzalez Altamirano shows that in FY 2010, the cost of police funding in Austin, adjusted for inflation, was about $360 per person (APD's approved budget was then roughly $240 million).

Perhaps the more difficult work – technically, at least, if not politically – will be deciding how to spend this money instead. Harper-Madison's resolution suggests increasing staffing for the Austin-Travis County EMS Community Health Para­med­ic program, which has improved access to health care and social services for people living in deep poverty. An amendment to the resolution from CM Ann Kitchen, which Harper-Madison said she would incorporate, would direct some funds toward the First Responder Mental Health Calls for Ser­vice program, which could fund more mental health clinicians and better training for 911 operators, who could help manage an urgent mental health crisis while a clinician is dispatched.

But the deeper cuts on the table concern Casaday, even if he can read the writing on the wall. "[Council] is going to do what they're going to do," the union boss told us, "but Thursday, Friday, and Saturday nights in this city are absolutely swamped with 911 calls of a serious nature. Our residents will see what happens when money to pay officers is cut."

As those conversations unfold in the weeks ahead of FY 2021 budget adoption in August, Casar's resolution, Item 95, will likely have a more immediate impact; it directs APD to prohibit the use of a range of techniques and equipment targeted by Campaign Zero's "8 Can't Wait" initiative. Officers would be barred from using "chokeholds and strangleholds," per the resolution's language, nor will they be allowed to use tear gas and impact munitions – including the lead-pellet bags that left protesters hospitalized – on peaceful demonstrators.

The department will also be instructed to reduce the "use, stockpile, and purchase of military-grade equipment" as much as possible, while restricting the issuance of no-knock warrants, which allow officers to enter an individual's residence without prior notification. Facial recognition technology will also not be allowed for "criminal investigation purposes, law enforcement, or surveillance purposes."

All of these changes will need to be worked into the department's General Orders, but Casar hopes APD leaders will make clear that officers should begin abiding by them immediately. That means Chief Brian Manley will have to be more cooperative with reforms than he has proved since taking the helm in 2018. Last week, Manley told Council he intended to change policy to prohibit officers from firing impact munitions into crowds – but left open the possibility they could be fired at an individual. Manley has also been slow at implementing Council's direction (approved unanimously in Janu­ary) to end enforcement in low-level possession of marijuana cases; on June 8, he issued a memo to Council asking for another month to provide an update, originally due on May 1.

Garza's resolution, Item 50, would attach "zero disparity" goals to the policy changes proposed by Harper-Madison and Casar, as well as others to come. It would update the city's Strategic Direction 2023 plan (adopted in 2018) to include specific policing metrics under its broad goals of public safety and community equity. The mayor pro tem specifically wants APD to seek to reduce to zero any disparities between racial and ethnic groups in traffic stops; citations and arrests stemming from those stops; use-of-force incidents; and "deaths at the hands of APD officers." A February report by the city's Office of Police Oversight detailed how those disparities have worsened over the past five years.

Flannigan's Item 93 would redesignate the Judicial Committee, which he chairs and whose original charge was to oversee the Mun­i­cipal Court (which reports directly to Council, not Cronk) and Downtown Austin Com­munity Court, as a broader "Public Safe­ty Committee." With this scope, Council hopes it can more closely track reform efforts and publicly hold APD accountable for any further delays in implementing its direction.