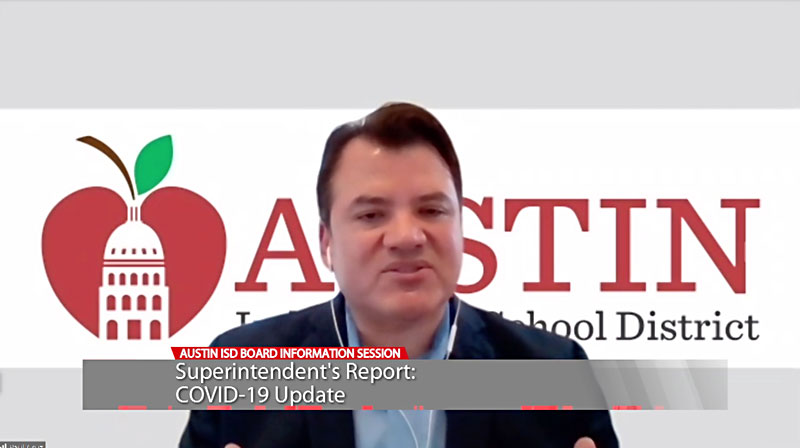 Monday night's Austin ISD board meeting had the frazzled, stuttering pace of just about every online meeting three months into the coronavirus pandemic. But the reality was that the trustees were discussing changing drivers in the middle of a car crash, as the two most pressing issues facing the district – hiring a new superintendent and constructing the budget for the upcoming year – dominated the agenda.

Actually, and in the historical context of the district, the superintendent search could be going far worse. Superintendents are usually hired to fill what the board sees as the most immediate need. This time, with current Superintendent Paul Cruz heading to a new position at UT-Austin in the fall, trustees are asking what Austinites want.

Having posted the vacancy in April, JG Con­sulting is now developing the leadership profile of desirable qualities. The draft list presented to the board on Monday was unremarkable: a teaching and academic background, prior superintendent experience, and a good listener. What's more significant is the scale of the feedback: JG president and CEO James Guerra told the board his team had already held 70 meetings with a broad variety of shareholders, from parents to staff to union representatives, and the board itself. So far, they have had input from 1,200 people, and Guerra expects that number to only increase before making a final presentation to the board on June 22.

That's where the good news stops. Guerra noted that there are currently 39 districts searching for superintendents in Texas alone, with a 40th likely to confirm it's in the market this week. Qualified superintendents are in short supply (during the last search, staff estimated there were only a handful of serious contenders) and Guerra tacitly stressed that the district shouldn't just settle for any qualified CEO. "We're looking for candidates who are running toward something," he said, "not away from something."

Unfortunately, what they'll be running toward may be the biggest AISD budget hole in living memory. As Chief of Business & Operations/CFO Nicole Conley generously described the current state of the proposed $1.6 billion spending plan, "It was coming together really nicely, and then we have to make some other investments." That was a euphemistic way to describe how the district has, is, and will continue scrambling with its coronavirus response. The current plan is to reopen schools in August with a mixture of in-person and remote learning, but until her office knows exactly what that looks like, they cannot calculate the cost.

The district has already spent an additional $10 million on its COVID-19 response – extra meals, PPE for staff, remote learning technology – and those costs will rise in the fall. Meanwhile, the cash coming in looks set to dwindle. The message from lawmakers up to now has been that even with Texas in a full-blown recession, school finance was not a target for cuts. However, with the state's Permanent School Fund (its main funding mechanism for education) dependent on oil and gas revenues – both of which had collapsed pre-coronavirus due to the Saudi-Russian price war – the state's contribution may well collapse. In 2011, the last time the state faced this kind of budget crunch, the district lost $50 million. This time, Conley said, the situation looks three times as bad.

So if the district wants to pay for existing costs and grapple with the extra burdens of coronavirus-proof classrooms, plus fund Cruz's commitment to social and emotional learning and college prep, an overdue equity study that the board is pushing, and a proposed 1.5% cost-of-living allowance for staff, whoever the new superintendent is, beyond what the leadership profile says, they better be an expert at stretching a dollar.