Having been derailed a week prior by protest violence – mostly waged by Austin police – the Austin Justice Coalition's Black Austin Rally and March for Black Lives made up for lost time Sunday, June 7, as thousands took to Downtown and Eastside streets to say, emphatically, that Black Lives Matter.

In stark contrast to the chaos and bloodshed of prior days of protest, the massive rally and march from Huston-Tillotson University to the State Capitol and back featured no arrests, no reports of serious injury, and no apparent use of force by either Austin Police Department officers or Texas Department of Public Safety troopers. As the crowds made their way back across I-35 at 11th Street, the only visible police presence was a pair of APD motorcycle officers directing traffic, surrounded by hundreds if not thousands of Austinites who, though peaceful, were quite vocal in their chants and calls for a future without police, or at least one very different from our present.

Those crowds reflected a diversity of race and culture and class and age that most Austinites do not experience in their daily lives, with Black voices intentionally front and center. That word was made flesh from the very start of the rally in the midday heat, in the remarks by Huston-Tillotson President Dr. Colette Pierce Bur­nette. "This university is a visual reminder of a tale of two cities," she told the crowd, "an institution on the Eastside that for years has been perceived and treated [as] less than, ignored, not invested in, treated like a stepchild."

Instead, the 140-year old HBCU is "a precious jewel in the city's Violet Crown, a bastion of knowledge, grace, power, strength, and resilience. But Black Austin, that is who we are as a people," Pierce Burnette continued. "We've got to stay in a collective. Be a protester, don't be a looter. Use your voice to amplify your cause, not someone else's. Choose your own form of activism, don't be a pawn and let someone choose you and use you as a distraction. Don't be colonized. ... It's our responsibility to our ancestors, our children, and our children's children ... Be part of a movement, not just this moment."

“Be part of a movement, not just this moment.” – Huston-Tillotson President Dr. Colette Pierce Burnette

Pierce Burnette's instructions were a pointed rebuke to the self-styled revolutionaries of the "Mike Ramos Brigade," whose calls for direct action and heightened conflict at protests throughout the week helped convince APD leadership of the need for force, with tragic consequences. In case the point needed further reinforcement, Pierce Burnette was followed by Brenda Ramos, mother of the man killed on April 24 by Austin police, whose case – and scores of others before him – localized the anger, sadness, and demands for justice galvanized nationally by the murder of George Floyd by police in Minneapolis.

"First of all, I want to get this straight," Brenda Ramos told the crowd. "I'm angry – excuse me for that, but I have every right. We do not associate with the Mike Ramos Brigade. I want my son to lay in peace, quiet, and respect." She went on to deliver an emotional and harrowing account of how she has lived with the facts of her son's last moments.

"I cry every day, as the awful video plays over and over in my head," she said. "I hear the truth in my child's voice, as he implores hysterical police officers to believe him, that he does not have a gun and never has. I can hear his complete confusion as he yells back at the officers screaming at him for telling the truth." How does she endure this? "What keeps me going every day is my commitment to myself and my son Mike that no more moms and dads and children go through this torture that I live, while we wait for answers and only hear lies."

“I am waiting to find out if Chief Manley will continue to trash my son to the world ... justifying the murder of my son.” – Brenda Ramos

Those lies, Brenda Ramos said, are coming straight from the top of APD, as she laid blame for her suffering and loss squarely at the feet of police Chief Brian Manley. "I am waiting to find out if Chief Manley will continue to trash my son to the world," she said, "justifying the murder of my son." She specifically pointed to the death in custody report, signed by Manley, made as required by state law to the Texas Attorney General's Office, stating that it was "unknown" if Ramos was armed – a claim he has since acknowledged to be false, as corroborated by video.

Forty-four days after Mike Ramos' death, Officers Mitchell Pieper and Christopher Taylor had been neither fired nor arrested. As Ramos' mother awaited the eventual convening of a special grand jury by Travis County District Attorney Margaret Moore, she told the crowd, she had not been allowed to see the dash and body camera video captured at the scene. "I live in fear of what [APD] may say about Mike. They've been working on their story for 44 days." She called for legislators to take action on reforms that would empower survivors and families like herself as they cope with the consequences of police violence.

In the face of such trauma, the leftier-than-thou provocations and insults of the Mike Ramos Brigade are not only offensive but also really, really weak. Despite being lumped in by credulous law enforcement authorities with antifa – whose busloads of 100-foot-tall super soldiers are threatening towns across America, according to the dark fantasies of Cop Land and Fox News Nation – the Brigade is widely understood to be another incarnation of, or at least substantially overlapping with, the crowd of chaos tourists that's also acted out in the guise of Defend Our Hoodz and the Austin Red Guards.

As such, they have a growing record over the past several years of getting violently crosswise with not only elected officials and law enforcement, but most of Austin's progressive movements and leading voices, as well as the press. This includes the Chronicle, whose photographer Jana Bir­chum was assaulted by Brigade "organizers" at APD headquarters on Thursday, June 4 (an attack livestreamed on their Facebook page). As more people come forward with their accounts of being abused by those among the Brigade's forces and followers, we will continue to follow the developing story.

These antics, along with the break-in (also livestreamed) at the Target in Capital Plaza on I-35 at 51st Street, were amplified beyond their true significance by DPS, APD, and especially the Austin Police Association, who tried to scare folks prior to the June 7 march with tales of "plywood shields" fabricated by antifa super soldiers to withstand riot-armed cops – and then, supposedly, hidden in a Downtown dumpster that looked to most people to be filled instead with ordinary construction debris. Meanwhile, APD itself tried to change the narrative by pushing, and apparently fabricating, a story of the hundreds of pro-police thank-you notes they received – which, as shown in their photos, appeared written by the same hand. (This bit of clownery, and the dissembling that followed once APD got called out, became a national story briefly this week.)

These displays of not-getting-it and not-reading-the-room certainly did not help Manley as he fought to keep his job under increasing pressure, including from Brenda Ramos. "People want Chief Manley fired and off the force," she said, raising her fist in agreement as she detailed how Taylor had already killed an unarmed man less than a year ago, without consequence. She was joined by other friends and family members of Mike Ramos in urging that the crowd honor and respect his memory with their conduct at the march. 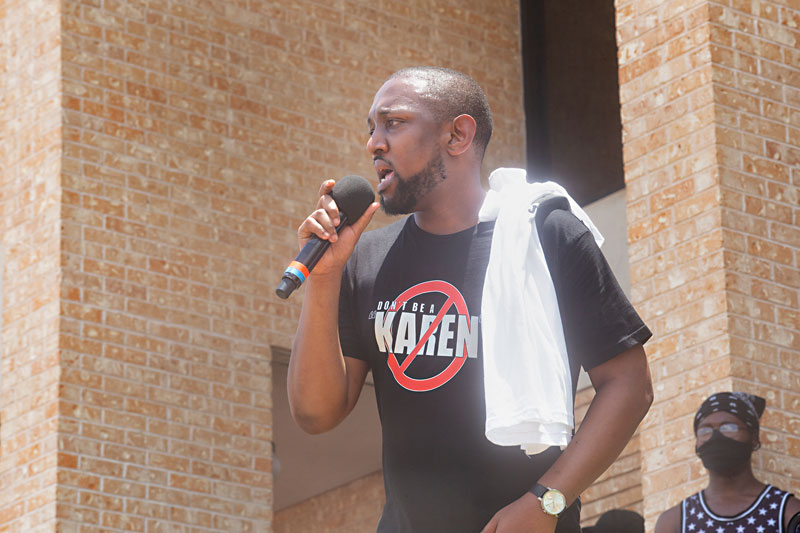 That commission was amplified by AJC founder and Executive Director Chas Moore, thrust into a community leadership role of even greater breadth and weight than he had already occupied as an influential and successful advocate for justice. "We are a policy organization," he told the crowd, "doing policy work. We understand as a Black-led organization that we cannot 'policy' our way out of the problems that we're in. However, we have to give ourselves shield and cover because if we didn't, the system as designed would eat us up whole, in an instant."

As he urged Black members of the crowd to get to the front – "Today is about us being seen" – Moore affirmed to Black men, "You are not the problem, no matter how many videos you watch of them killing you, shooting you, stabbing you. ... Keep your head up. Stop buying into the system of white patriarchy," with the consequences that implies for Black women. To them, Moore said, "I'm not going to ask you to go vote. ... We are here for police brutality, because police are killing Black men and Black women, but we're also here because Black women are dying just from giving birth because their doctors don't listen to them, because Black women are still not getting paid equally for doing the job and doing it better."

Then, turning to the non-Black members of the crowd, Moore gave them a commission – to surround and protect the Black bodies leading the way – as well as a challenge. "You have designed the system to work the way it does," he said. "You have to be really willing to do the inner work, the soul work, to let that go. ... So your hashtags are wonderful, your yard signs are beautiful, but what are you willing to relinquish to tip the scales of justice and economic opportunity? What are you willing to let go?"