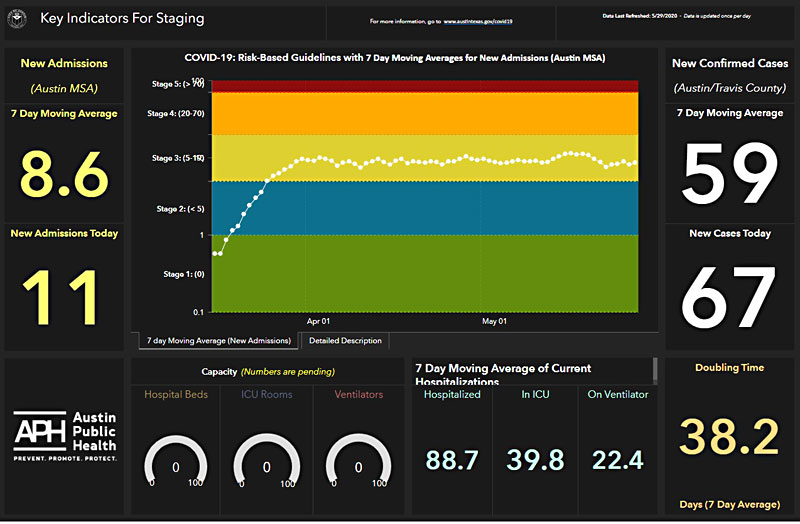 Expanding on its previously released Risk-Based Guidelines, Austin Public Health has released a comprehensive staging dashboard to track COVID-19 hospitalizations, new confirmed cases, and other key indicators that will trigger a move between stages of risk. Since it unveiled the guidelines May 13 – a color-coded, five-stage alert system with corresponding recommended behaviors – APH has put Austin dead-center at Stage 3, code yellow. With these new metrics, with special focus on the seven-day moving average of new hospital admissions, APH has signaled that the risk of community spread is slowly increasing.

The hospitalization metric was developed in coordination with the statistical modeling team at UT-Austin that's been advising APH and city and county leaders throughout the pandemic. Stage 3 is defined by an average of five to 19 new COVID-19 admissions in the five-county Austin metro area; Stage 4 (code orange) is 20-70 admissions. On May 29, the day the dashboard debuted, the metric was at 8.6; by Wednesday, June 3, as we go to press, that number has risen to 10.9. A shift to Stage 4 would mean that, along with the usual recommended safety protocols (mask wearing, hand washing, social distancing), Austinites would be advised to work, dine, and shop only at "expanded essential businesses" and dramatically limit gathering in groups – a stark contrast to Gov. Greg Abbott's speedy plan for reopening businesses and reintegrating Texans into broader society. Abbott's Open Texas plan – which recently allowed waterparks, pro sports leagues, driving schools, and overnight youth camps, among other businesses, to resume modified operations – has continued unimpeded despite no evidence that COVID-19 transmission in Texas has slowed or even stabilized. As the Chronicle went to press Wednesday night, Abbott announced Phase 3 of the plan: bars will be allowed to expand their operating capacity from 25% to 50% effective June 3, and restaurants may expand their occupancy to 75% starting June 12.

Dr. Mark Escott, interim health authority for Austin-Travis County, said APH is expecting an increase in cases as a result of this weekend's protests against police violence. "When it comes down to it, disease is transmitted by person-­to-person interactions," he said in a June 3 media briefing. "I was pleased to see many people participating in peaceful protests were wearing masks and it actually helped to mitigate that risk, but social distancing was impossible in many of those locations."

"We are encouraging individuals that may have participated in the protests, please go to our website and take the assessment and sign up for a test," said APH Director Stephanie Hayden in the briefing. As far as testing among first responders, Escott said APH hasn't seen any cases related to the protests. If there were to be a cluster around the protests, then APH will make further recommendations, which "may encourage our first responders to get tested if they participated in the response to the protests," he said. (The Austin American-Statesman has reported that an officer temporarily assigned to the Capitol to provide security during the protests has tested positive for COVID-19.)

Here and nationally, that impact of COVID-19 has been felt disproportionately by communities of color. The city released a report on June 2 identifying "two key vulnerable groups" – nursing homes and communities of color – and positing that "longstanding disparities are a key factor in hospitalizations and death rates." Among non-nursing-home cases in Austin, fatality and hospitalization rates are highest for African American residents, at 5.4% and 18.5% respectively.

"People of color are overrepresented in every characteristic that puts you at risk for complications from COVID-19," said Brion Oaks, the city's chief equity officer. "They are also overrepresented in essential work and employed in positions that do not allow working from home. We may be in the same storm, but we are not in the same boat. We must focus on supporting our communities of color and other vulnerable populations as we work to respond to this crisis."

The city dashboard tracks outcomes (confirmed cases, hospitalizations, deaths) by race and ethnicity, revealing the pandemic's disproportionate toll upon the Latinx community, which as of May 26 accounted for 76% of hospitalizations in Austin. Paul Saldaña of the Austin Latino Coalition expressed frustration with the City Council, APH, and other officials for what he felt was inadequate attention to that disparity. "There have been many concerns expressed directly to City officials that a mitigation plan and more effective culturally sensitive, bilingual public ed [and] prevention plan is not happening," he told the Chronicle via email.

In particular, Saldaña cited APH's sparse Spanish-language news and information briefings; a lack of grassroots campaigns targeted at Latinx populations or partnerships with trusted organizations to co-host testing; access to unconditional free testing in areas of the city with many cases and Latinx residents; and sensitivity to the lack of trust undocumented persons have of government testing sites.

"To be clear, our Latino community has not been asking for preferential treatment," Saldaña said. "We have simply been reminding city officials that their communication plans are not working, based upon the data that Latinos for weeks have been overrepresented in COVID cases, hospitalizations, deaths, and positivity rates."

Austin Public Health said it's going to launch mobile and targeted testing sites to help address the disproportionate impact of COVID-19 on vulnerable populations. It's also looking to better engage with various communities. "We would like to identify a partner in those target ZIP codes, where the city would be able to partner with them, and they be an ambassador for us," said Hayden, acknowledging how some people might be hesitant of a government entity. The city is planning a conversation with communities of color, currently scheduled for Saturday, June 13, 10am-noon, to discuss ways to improve health outcomes.