The right to listen 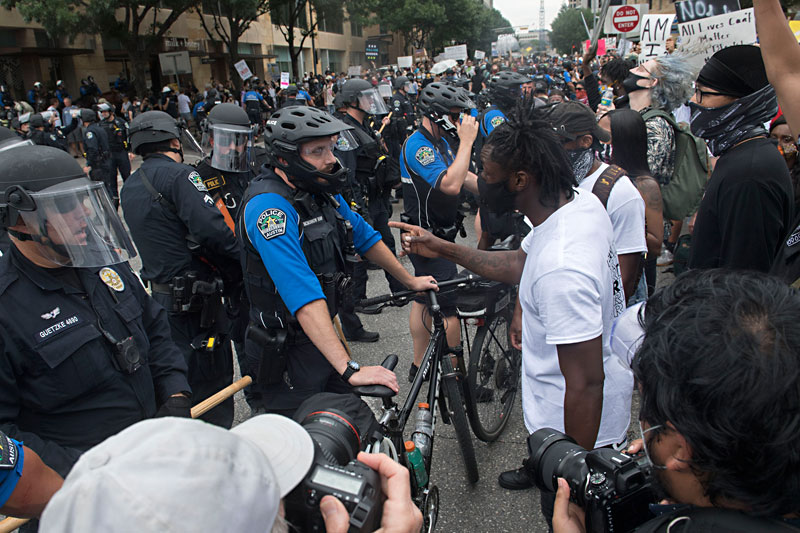 Police and protesters pause during a march toward City Hall on Sunday. (Photo by John Anderson)

City Council will have a long day today, June 4, with back-to-back meetings: a relatively light 52-item agenda for their regular session, followed by a special called meeting to address this week's protests and the Austin Police Department's response, which left several demonstrators seriously injured in incidents now under investigation as officer-involved shootings.

APD and City Hall executives will be on hand to answer questions from council members who are prepared to drill down on how and why officers used what looks like disproportionate force against legal and necessary protests, and what Council can do to prevent a recurrence. CMs and other observers, including those whose images and videos have spread on social media, are alarmed at the bloodshed caused by "less lethal impact munitions" amid large and peaceful crowds whose few and scattered aggressors were armed with little more than stray rocks and water bottles.

Council's direct authority over APD and its officers is restrained by state law, but its right to listen to citizens is unlimited, and one goal of today's meeting is to give demonstrators who faced police violence a safe space to speak out. "An emergency hearing in front of City Council is an important step for us to take," CM Greg Casar told the Chronicle. "It's a powerful tool to have people share their stories about just trying to demonstrate peacefully, and having force used against them."

Council’s direct authority over APD and its officers is restrained by state law, but its right to listen to citizens is unlimited.

Before that, Council has other business. Its agenda includes approval of a broad framework to guide city staff as it spends more than $270 million in anticipated COVID-19 relief funds, predominantly from federal reimbursements. Staff's recommendation allocates the funds into three big buckets: emergency response, medical and public health needs, and economic support. Since last week, Council has mostly debated what the last of these should look like.

Casar, CM Natasha Harper-Madison and Mayor Pro Tem Delia Garza have all sought to replenish the Relief in a State of Emergency (RISE) Fund, initially seeded with $15 million in city reserves to help people unable to access federal COVID-19 relief. That money has been completely disbursed via local nonprofits, including as direct cash assistance to those in need through prepaid debit cards and bank transfers, which the CMs want to continue.

Others have advocated for more assistance instead to small businesses, to help keep workers employed and able to earn income, but at the June 2 work session, Casar proposed reducing support to businesses, nonprofits, and the creative sector, in order to boost funding for direct cash support and rental assistance. Such changes are not as important at this point, since staff has expressed its need for flexibility in allocating funds to individual line items (21 between the three buckets) as the public health and economic situation evolves.

Another resolution, introduced by Garza, would direct city manager Spencer Cronk to explore a centralized intake system to process applications for RISE funding. The nonprofits that delivered assistance from the first round of RISE funds were overwhelmed by requests and had to offer first come, first served support to many people in need. Garza's proposal suggests a unified application to be used by multiple organizations, and a lottery system – such as was used by the Housing Authority of the City of Austin to award $1.2 million in COVID-19 rental assistance to about 1,000 Austin families – to give more people a chance at receiving aid.

An ordinance from CM Leslie Pool aims to help businesses provide more healthy space for customers by expanding into their parking lots and the public right of way. The pilot program would let restaurants, bars, and retailers apply for Tier 2 special event permits to use private parking lots, sidewalks, and city streets as business space. Public parking spots could also be used, but the permits would be more expensive. Permits would last for 30 days, with five renewals available; street closures could not last for more than 48 hours at a time. (A standard Tier 2 permit only lasts for four days.)

Each business would have to submit a plan to the Austin Center for Events outlining how it will use the space while also maintaining its accessibility; Pool hopes the city can provide resources to guide businesses that don't normally apply for ACE permits through the process. The pilot would begin June 15 and end Dec. 15, unless the City Manager or Council intervenes. After 60 days, staff would report to Council on how the program has impacted parking and ROW use and helped "facilitate stronger and safer reopening of local businesses," per the ordinance language.

Austin BCycle's docked bikeshare stations have seen a resurgence in use after other micromobility providers halted operations during the pandemic (though they are slowly returning). Capital Metro is hoping to capitalize on that renewed interest by forging a partnership with the city, which owns BCycle (it's operated by the nonprofit Bike Share of Austin), to make it an official service of the transit authority and rebrand it as MetroBike. An item on Thursday would set this process into motion with a new interlocal agreement between the city, Cap Metro, and BSA, and a commitment of $229,000 in city funds for more (and smaller) BCycle stations throughout town. Cap Metro also hopes to win a federal grant to electrify all 700 bicycles in the fleet; a current pilot program has deployed 200 BCycle e-bikes in Austin.