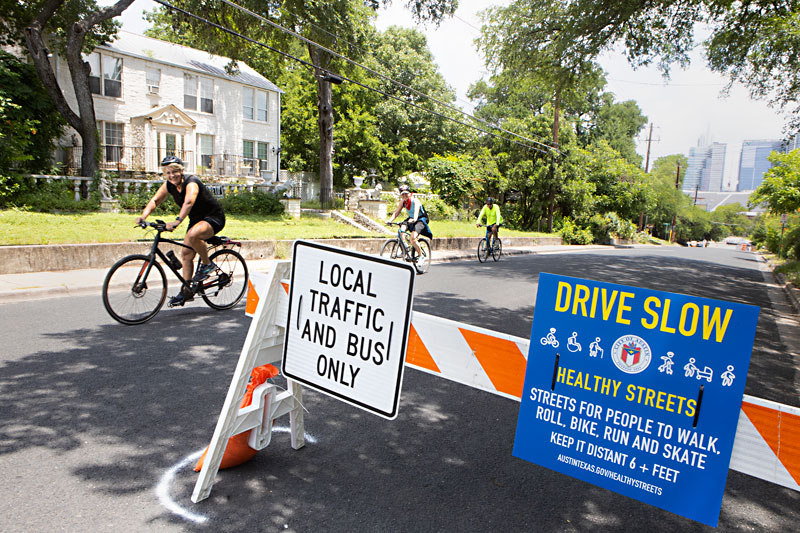 Bouldin Avenue on the First day of the Healthy Streets Initiative, which closes down some streets to encourage walking, running and biking safely. (Photo by Jana Birchum)

Austin has joined a growing number of global cities that aim to provide more space for outdoor recreation and safer commutes for nondrivers by closing some local streets to through traffic. The Healthy Streets program kicked off with three routes on Thursday, May 21; deliveries, local residents, and emergency services will still have access, but reduced speeds are expected to be encouraged by design.

Impacted roadways are closed off at intersections along each route using traffic cones and barricades with signs indicating the streets are prioritized for local traffic and "people to walk, roll, bike, run, and skate." The idea of Healthy Streets, introduced by Council Member Paige Ellis and approved unanimously by City Council last month, is to open up more public space for the physical and mental health benefits of outdoor recreation, while maintaining distancing during the COVID-19 pandemic. That means people can't post up with a grill and treat the newly opened space as a park; they are expected to keep moving. The program is also expected to reduce overcrowding at existing city parks and urban trails.

The first batch of Healthy Streets includes a South Austin route from Bouldin Avenue, running south to Barton Springs Road before cutting east along Jewell Street and then south along South Third to Oltorf. The route picks up again on Herndon Lane near the South Austin Recreation Cen­ter, where it runs south along Locke Lane and Garden Villa Lane to Bannister Lane.

A second route traverses the Eastside along Comal Street from Manor Road south to Lady Bird Lake, and the third route in this initial batch extends Country Club Creek Trail in Southeast Austin to include Wickersham Lane, Oltorf Street, and Pleasant Valley Road, ending at Mabel Davis Park. All together, the routes partially close off about 5 miles of roadway in South and East Austin and join two routes implemented earlier in the pandemic: Riverside Drive from Lamar to South First, and Pleasant Valley Road from Canterbury Street to South Lakeshore, across Longhorn Dam.

More are coming. Austin Transportation Department staff launched a number of feedback tools – including one to suggest streets for the next batch – to gauge how residents living near impacted streets, and those utilizing them, feel about the partial closures. That feedback will be used to refine the program along existing streets and to select new ones; ATD will update Council on the program's progress in the upcoming weeks.

ATD's Laura Dierenfield told the Chron­icle that a focus for staff was finding a way for Healthy Streets to expand on the city's existing active transportation network, and to give people safer access to trails, bike lanes, and other shared-use pathways, and better connections to transit. The results could suggest whether to make the changes permanent, even after the need for physical distancing has passed.

"We're looking to add more streets in parts of Austin that have a more guided structure," Dierenfield told us, "because they will allow us to offer better connectivity and more biking and walking options. We are designing temporary measures for now, but we are also relentlessly pursuing permanent changes to the network."

Feedback has thus far been generally positive, but some commenters have told ATD staff the temporary barriers are not enough to limit auto traffic on Healthy Streets. Others have suggested the program is a gimmicky way for the city to build out the more than 2,000 miles of sidewalk it needs, according to a 2019 audit.

Even that criticism is couched with support for some aspects of the program, such as the potential for slowing traffic. Some residents are frustrated by the way the program was rolled out: Residents on or near the routes say they were not notified of the upcoming "soft closures." Since the changes are mostly low impact – detours have also been marked by ATD – complaints have been minimal, according to the department, which says it promoted the coming changes on social media and "created easy to understand signage" announcing the closures.

ATD staff also didn't have much time; Council set a two-week deadline for planning and implementing the routes and launching the website with feedback tools. "We definitely implemented Council's direction quickly," said Dierenfield. But she emphasized that ATD is closely monitoring feedback coming in through the new tools as well as already established channels, and is prepared to respond quickly with changes to the program.

Ellis says the quick turnaround was baked into the resolution because she and her Council colleagues identified a pressing need for safe access to more public space during a crisis. "Two weeks is a very quick turnaround to implement an idea like this, and it does take a lot longer to build out a more robust plan," Ellis said. "But I am impressed at how staff has rolled out the program with plenty of ways to raise concerns. As we implement more streets, I'm hoping people will get more comfortable with the idea and see the benefits."