A Rough Start to Summer for Austin’s Beloved Pools

Can we swim yet? [Correction, June 11, 2020: The original story stated that the hiring freeze for lifeguards had been lifted. The freeze remains in effect.]

As the temperature creeps into the high 90s, Austin's most iconic summer haunts are drained and covered, with vacant lifeguard stands and empty ticket booths.

Although Gov. Greg Abbott's executive order permitted public pools to reopen on May 8 at 25% capacity, Austin pools have delayed their reopening until June, a decision which Austin's Parks and Recreation Department (PARD) attributes to continuing health risks.

"While it is both our goal and hope to provide services and programs to the community this summer, the health and safety of our community remains our priority," PARD said in a statement.

When pools reopen this summer, they will be back with "considerable modifications," including increased social distancing rules and enforcement. (Abbott's executive order encouraged swimmers to self-screen before entering pools, keep a 6-foot distance from other patrons, and wear masks while out of the water.)

This is already the case at other Austin locations open for swimming, such as Emma Long, Walter E. Long, and Commons Ford Metropolitan Parks, which began requiring day passes on May 14. Overcrowd­ing has also been an issue on Lady Bird Lake. After a Facebook picture of an overcrowded Barking Springs, the free and popular dog-friendly swimming hole next to Barton Springs, went viral in late March, the city closed down that area of Barton Creek and Lady Bird Lake.

Beyond the intricacies of social distancing, more obstacles lie between Austinites and their beloved pools. One of the most prominent: The teenagers who the city hires annually as lifeguards have not flocked to the stand as they have in past years.

In past summers, the city has hired up to 800 lifeguards. When the coronavirus pandemic forced it to suspend operations, the city went on a hiring freeze. Even if the freeze was lifted, with pools closed and no information about when they might open again, potential employees have been wary. Last week, PARD said it had hired approximately 250 guards.

Skittish lifeguards include Evan Sayer, who has lifeguarded for the past three summers and spent summer 2019 on the stand at city pools. So far in 2020 during the pandemic, lifeguard shifts are severely limited and, Sayer said, lifeguards who need the income are prioritized. Sayer, a high school senior who lives with his parents, has worked only once in 2020 – an 8-hour shift in early March at Deep Eddy Pool, mowing grass, picking weeds, and cleaning the facility.

Other than that, his only lifeguarding income comes from the hour of online training he completes every week. To supplant the lifeguard paycheck, he applied for a job at H-E-B, which is guaranteeing him at least 40 hours a week. And he's not alone. "They won't have all those new recruits that they usually would have," Sayer said. "I think people aren't even thinking about lifeguarding because they just assume the pools won't be open."

PARD Director Kimberley McNeeley is concerned about those potential lifeguards not considering the role. She spent several minutes in a recent public video chat on social distancing in parks, titled "Six Feet A-Park," talking about the importance of temporary employees like lifeguards in reopening facilities.

"We want to [reopen] ... in a safe and healthy manner, and we also have to have the appropriate personnel to be able to do that," McNeeley said. "As we make those decisions, we're also making those decisions based upon how many personnel are there available to provide that service."

In addition to a limited number of workers, there are also difficulties training newly hired lifeguards. The program typically includes extended hours of "hands-on, in-the-pool training and very close contact" according to a PARD spokesperson, which is difficult to replicate in a virtual format.

The job posting on the city's website encourages applicants to prepare for a "modified summer aquatics season" and warns about suspended in-person training. The city's quickness in training lifeguards once any pools are permitted to open will be a deciding factor in determining its schedule.

Financial pressures could also impact the schedule of reopening, albeit in a different direction. Austin's pools, especially iconic ones like Barton Springs and Deep Eddy, are a huge attraction for residents and tourists alike. Barton Springs alone received over 950,000 visits between October 2018 and October 2019.

The eight pools which charge for entry – with fees ranging from $2 to $9 – were expected to pull in $4 million in revenue in fiscal year 2020, over a third of the $11 million aquatics budget. The pools' revenue, along with other PARD revenues that go into the city's General Fund, are among the many city funding sources directly hurt by the pandemic, leading to financial strain on the department. "The budget is heavy," McNeeley said in Six Feet A-Park. "I'm not going to lie. It's weighing a little bit heavy on our mind."

McNeeley said PARD was considering partnerships with other governmental or nonprofit organizations to ease the budget crunch and help run parks – and possibly pools – more efficiently. This could be a promising option for the city once the pools reopen.

For now, they are sitting empty. However, Austinites could begin to swim soon, although they will return to a different experience. 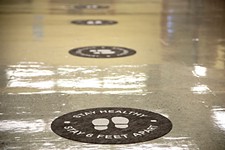