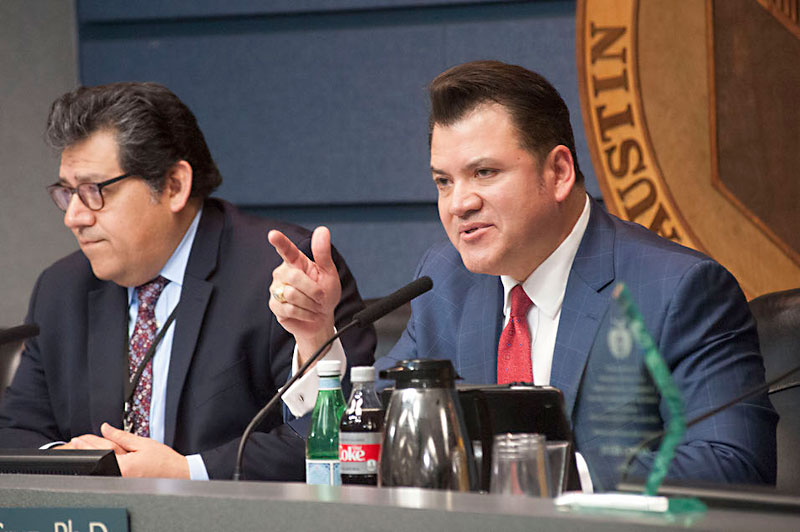 In a May 18 update to the AISD board of trustees, JG's president & CEO James Guerra laid out the next steps in the candidate screening process. The application window is scheduled to close June 17; then, on June 22, JG will make public a "leadership profile" that the board will use when reviewing prospective candidates in July. In the interim, the firm will continue seeking feedback from the community, in addition to jump-starting recruitment efforts for potential candidates. The district still plans to hire a new superintendent before the end of August, when Cruz departs for a position at the UT school of education.

Both JG and the district are emphasizing community input throughout the search process. "We are here to receive your input and your feedback in the spirit of the collaboration of this executive search process," said Guerra. AISD Board President Geron­imo Rodriguez told the Chronicle in a followup to Monday's meeting, "I would venture to say that we will make sure that we have more input than we had in 2014" with the last superintendent search. "We're trying to engage both parents [and] former parents, critics, supporters – every corner of this community."

Ultimately, that community input is intended to inform the ideal traits and characteristics included in the "leadership profile." In a board information session scheduled for June 8, a summary of the community input will be made public. The board will also then receive a leadership profile draft, ahead of its June 22 vote to approve the profile and make it public.

Education Austin President Ken Zarifis told the Chronicle the union is looking for three qualities in a new superintendent: an understanding of institutional racism and historic inequities; teaching experience; and someone who will "clearly respect and embrace" the district-union relationship. "We want to make sure they understand what those things mean and how those are enacted," said Zarifis. He said Education Austin is planning on additional meetings with JG: "That's more engagement than we had really on the last two superintendent searches, so we're hopeful that that leads to a good end."

All of this is happening, of course, as the district responds to the ongoing COVID-19 crisis. At Monday's board meeting, Cruz said the district's newly formed "re-entry task force" continues to monitor three "what-if" scenarios for the 2020-21 school year: an earlier start than the scheduled August 18 date; a delayed start; or a blended approach. In the more immediate future, however, summer school looms. Citing Gov. Greg Abbott's May 18 order, Cruz said AISD will proceed with summer classes – both remote distance learning and in-person instruction – after June 1. Classroom instruction entails a host of social distancing logistics and health guidelines, including smaller class sizes (fewer than 11 students) and increased facility cleaning.

Closing out Monday's meeting, the board voted on renaming two new elementary schools in AISD. The new school in South­west Austin will be named Bear Creek Elementary and is expected to open this August. Trustee Yasmin Wagner, who represents the school's district, said two-thirds of the naming task force picked Bear Creek as their first choice out of three finalists, which included Lady Bird and Barbara Beyer. The modernized Norman Elementary School in East Austin will bear the namesakes of its consolidated campuses as Norman-Sims Elementary. Another finalist was Draylen Mason Elementary, named after the former Pease Elementary student and 2018 Austin bombings victim. While the new site is under construction, Norman students are co-locating at Sims, one of four elementary schools the board approved to close last year, consolidating it into the modernized campus in spring 2021.

Register your feedback (in English or Spanish) via an anonymous online survey: www.austinisd.org/board/superintedent-search.