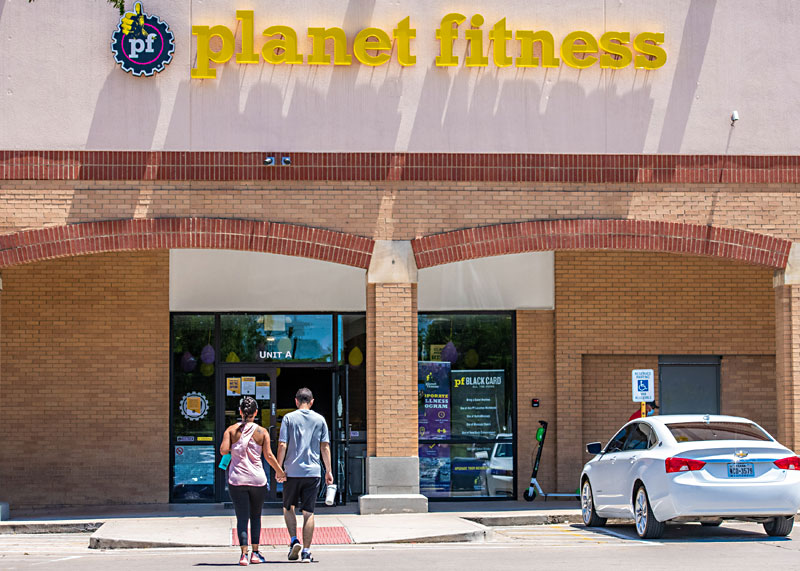 Gym members return to one of the newly reopened Planet Fitness locations (S. Pleasant Valley Rd.) on May 18. As businesses are allowed and encouraged to reopen by Gov. Greg Abbott, Council is looking to create a strategy to protect workers who feel they cannot stay home. (Photo by David Brendan Hall)

The City Council wants a strategy to protect workers who feel they cannot stay home and to slow transmission of the corona­virus. A resolution on today's agenda, introduced by Council Member Greg Casar, would create guidelines that employers could follow as businesses are allowed and encouraged to reopen by Gov. Greg Abbott. These would generally support high-risk workers (over 65, with underlying conditions, or living with those who are) as well as people who are reluctant to stay home if sick or to be tested for COVID-19, lest they lose income.

While Casar's resolution encourages employers to offer telework as an option or to isolate such employees in the workplace, the city doesn't have authority to enforce such rules. Instead, the resolution tasks city staff with finding ways to provide relief to workers who opt to stay home – by helping them file for unemployment benefits (including those made available to contract workers during the pandemic) or even providing direct financial assistance. The resolution also calls for city support of workers who advocate for safer conditions, with educational materials and outreach; City Manager Spencer Cronk is set to report back with a plan and funding options on June 2.

Another resolution, brought by Mayor Pro Tem Delia Garza, would convene a working group to create a "right to return" program for concession workers at Austin-Bergstrom International Airport laid off during the COVID-19 crisis. Such a program could use federal aviation bonds to incentivize airport restaurants and bars to rehire employees (or provide written notice of why they are hiring others); Cronk is set to report back on June 11 with recommendations from the working group.

The Country Inn and Suites at 7400 N. I-35 is the latest motel the city plans to purchase, for $8.75 million, as a quarantine site for people experiencing homelessness. Staff wants to buy the motel, rather than leasing it out as it has done with other quarantine and isolation sites, as "the most efficient action to ensure that these services and this space is available to address the public health emergency resulting from COVID-19," which is likely to last for more than a year.

Other items related to homelessness include a 15-month contract with Foundation Communities for 12 units of permanent supportive housing linked to the Downtown Austin Community Court at a cost of $285,345, with three potential 12-month extensions, as well as a three-year, $1.8 million extension of the city's contract with WorkQuest, which conducts cleanups under overpasses. Those have been on hold to avoid displacing encampments during the pandemic, and the city says the contract extension does not mean those cleanups will resume immediately.

Council is likely to approve a new slate of contracts with nonprofits from the city's Relief in a State of Emergency (RISE) Fund. The 11 new contracts, totaling about $4.8 million, include $800,000 to the Survive2Thrive Foundation, $356,000 to the Austin Diaper Bank, and $1 million to Caritas of Austin. At this point, the $15 million initially allocated to the RISE Fund has been mostly depleted, but some CMs are pushing staff to find more money to replenish it.