COVID-19 Is Still Here, but Texas Wants Us to Move On

That's not an order 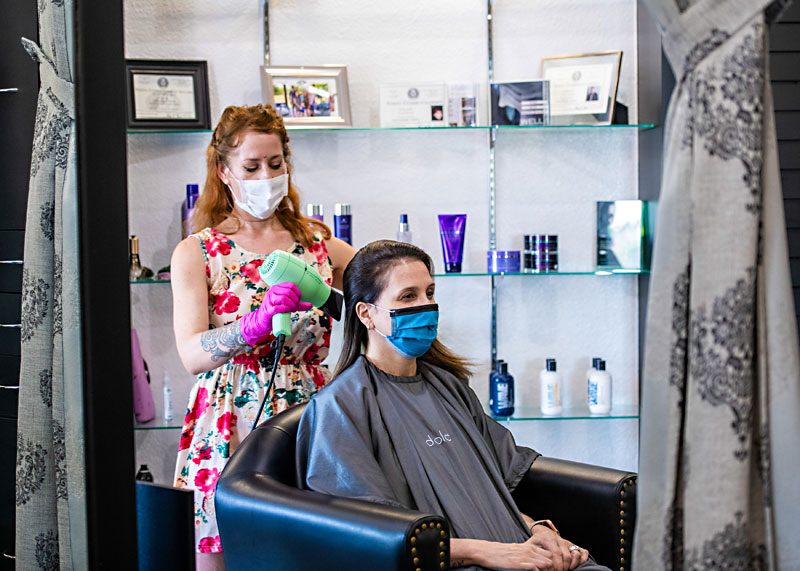 Stylist Apple Oliphant (l) does hair for a client on Saturday at Dolce Salon in West Lake. Masks are encouraged, but not mandated. (Photo by David Brendan Hall)

Even though the COVID-19 pandemic is not over, Texas is going about its business – no matter what its largest cities, including Austin, have to say about it. "Unfortunately, a few Texas counties and cities ... have grossly exceeded state law to impose their own will on private citizens and businesses," sneered Attorney General Ken Paxton in a Tuesday, May 12, press release, accompanying sternly worded letters from his office to Austin, Dallas, and San Antonio. "These letters seek to avoid any public confusion as we reopen the state."

The letter to Austin Mayor Steve Adler and Travis County Judge Sarah Eck­hardt, signed by Dep­uty A.G. Ryan Vassar, takes issue with their latest "stay home, work safe" orders for the city and county, which took effect at noon on Friday, May 8. Those updated orders did reflect Gov. Greg Abbott's latest moves to "Open Texas," allowing more public activity and lifting the threat of criminal penalties for, among other things, not wearing a mask or face covering.

But Adler and Eckhardt made clear on Friday that they were not eager to abandon public health measures that had worked over the preceding six weeks to forestall a critical breakdown of the regional health care system. "Relaxing stay-at-home measures too quickly and without adequate testing and tracing could result in an overwhelming surge of hospitalizations and deaths," reads Adler's order.

"If we had continued with business as usual back in March," said Eckhardt, "medical science predicts we would have exceeded our hospital capacity by now. ... Our infection rate is 90% less than what medical science expected under business as usual. ... But we'll have to stay the course even as we venture out. We must keep limiting our person-to-person contact; our lives or someone else's life depends on it."

From the White House on down, the right-wing messaging machine has seized on public health restrictions as an onerous threat to freedom and liberty, rather than a necessary response to the Trump administration’s own grievous failures at managing the COVID-19 crisis.

That's why, even though Abbott's accelerating efforts to put COVID-19 behind him have taken the teeth out of local restrictions, the Austin and Travis County orders still require residents to shelter in place, avoid social gatherings of any size, wear masks, and practice social distancing until May 30 in the city and June 15 in the county. "This virus is as infectious today as it was a month ago," said Ad­ler. "Everybody should be minimizing physical interactions absolutely as much as they possibly can."

Most people get this; opinion polls released over the last week show solid majorities of Americans, including in Texas, opposed to the rapid reopening of the economy, still fearful of the risk of COVID-19, and still planning on maintaining quarantine and social distancing. Abbott's own approval rating for his pandemic performance has weakened. On Tuesday, as Dr. Anthony Fauci warned the U.S. Senate that reopening too soon would result in "needless suffering and deaths," a report from Drexel University estimated that the restrictions in place since March in Austin had saved nearly 5,000 lives here and would continue to save lives if left in place.

Technically, Abbott's own executive orders and guidelines still encourage Texans to stay at home and practice social distancing and are still premised on a gradual increase in the number and kinds of businesses that reopen and in their customer capacity. Yet from the White House on down, the right-wing messaging machine has seized on public health restrictions as an onerous threat to freedom and liberty, rather than a necessary response to the Trump administration's own grievous failures at managing the COVID-19 crisis. Enter Paxton, for whom noisy grandstanding is an essential activity, to claim his share of attention against his favorite foes, big-city Democratic leaders.

Paxton's letter does not actually threaten Adler and Eckhardt with punishment for not getting with the Open Texas program, and it's not clear what power he or Abbott has to do so. The four-page letter from the A.G.'s Office says repeatedly that provisions of the city and county's orders are "invalid" and "unenforceable," the latter being a point that both Adler and Eckhardt have largely conceded. The letter also shrieks about restrictions on houses of worship that "trample religious freedom," and about the "Orwellian" provision that reopened businesses should maintain a record of their customers to aid in future contact tracing as needed.

That last measure is voluntary, but Adler's order reminds businesses that if they don't keep such records, Austin Public Health may need to call them out publicly if a cluster of COVID-19 infections appears linked to them, to alert people to get tested. That common sense provision "forces restaurants into submission," the A.G. says, and represents a gross invasion of privacy.