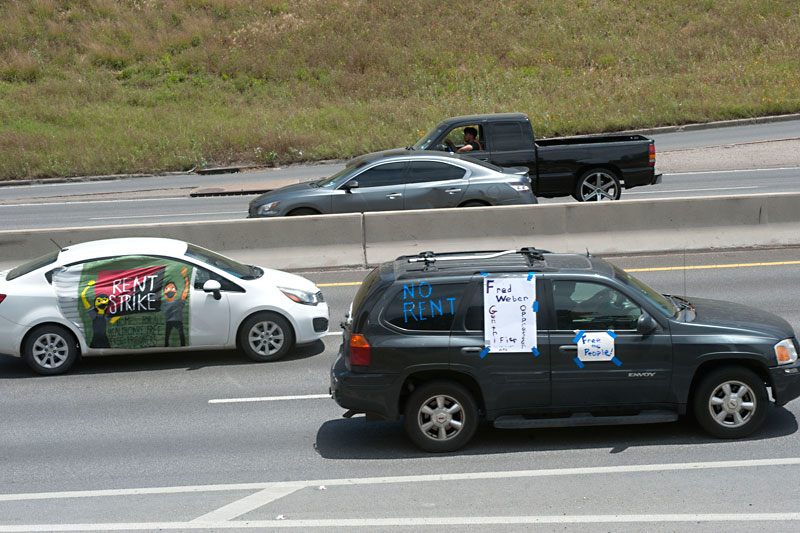 About a dozen people were arrested and their cars impounded Friday afternoon (May 1) after blocking traffic on I-35 as part of a May Day demonstration organized by Rent Strike ATX. According to a Facebook event page, the group's goal with the action was to "push [their] demands for rent relief, to amplify the 5 demands for emergency COVID survival, and join in the nationwide call for activity to shut down the economy, which is willing to sacrifice us for its profits." (Photo by John Anderson)

TX Reopens as COVID-19 CASES CLIMB On May 8, hair salons, barbershops, and pools across Texas will be allowed to reopen per Gov. Greg Abbott's announcement earlier this week. The list of businesses allowed to reopen Friday – a week after Abbott eased restrictions on restaurants and malls – include nail, tanning, and cosmetology salons. Gyms can start reopening May 18 with certain restrictions. The reopenings come as hot spots pick up across the state.

CAMPO Transpo In its Monday (May 4) meeting, the Capital Area Metropolitan Planning Organization (CAMPO) board approved its $42 billion 2045 Regional Transportation Plan. The 25-year plan includes over 500 transportation projects aimed at addressing traffic congestion and transportation needs across the Austin region. See "Moving Right Along" for more.

SD-14 Takes Shape As the May 13 filing deadline for the Texas Senate District 14 special election approaches, the race to replace retired Sen. Kirk Watson takes shape. Joining state Rep. Eddie Rodriguez in filing is former Lago Vista Council Member Pat Dixon. The news comes after Austin City Council Member Greg Casar's announcement that he will not be running, instead seeking reelection for his District 4 seat. Local attorney Adam Loewy is expected to make a "special announcement" today, May 7, that could pertain to the race; former Council Member Don Zimmerman has said he is "­exploring a run" for the seat.

Calling Happy Campers The Texas Parks and Wildlife Department announced limited overnight camping will resume May 18. Some existing reservations will be honored; however, no new reservations can be made yet.

ACC Goes Green Austin Community College announced a plan earlier this week to power its Round Rock and Elgin campuses with 100% renewable electricity beginning next month. ACC is the first community college district in Texas to do so, according to a press release from Environment Texas.

Blues at Blue Bell Former Blue Bell Creameries CEO Paul Kruse has been charged with criminal conspiracy over allegations that he attempted to conceal the 2015 listeria outbreak at the Brenham-based ice cream company that killed three people and hospitalized 10. The company pleaded guilty to separate misdemeanor charges for shipping contaminated products.

Rotten Eggs In a federal lawsuit filed April 30, shoppers are accusing Texas grocery giant H-E-B, among other grocery stores, of price-gouging eggs during the coronavirus pandemic. Other stores named in the suit include Texas-based chains Brookshire's and Lowe's Markets, along with national megachains like Walmart. “It’s almost ipso facto – the more that you have people out there the greater the possibility there is for transmission.”

– Gov. Greg Abbott in a leaked recording reportedly of a May 1 call with Texas lawmakers about reopening businesses amid the COVID-19 crisis.