Activists Call for Heads at APD 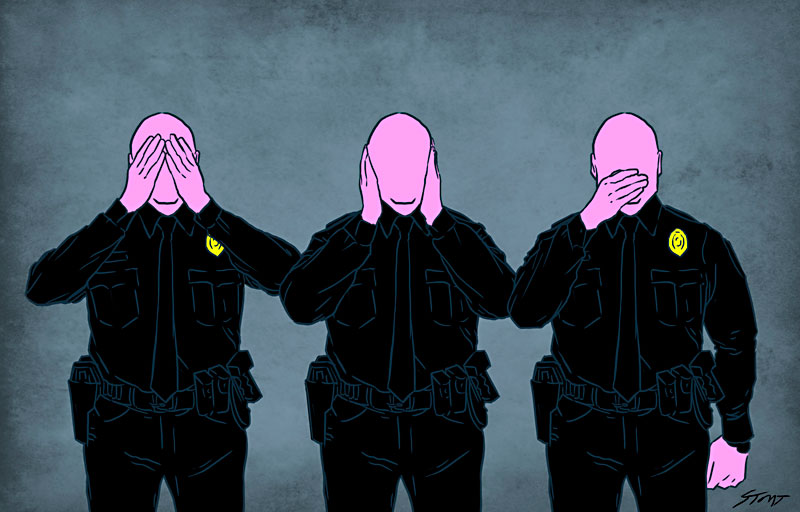 A coalition of grassroots groups has called on city leaders to fire Austin Police Chief Brian Manley, his Chief of Staff Troy Gay, and Assistant City Manager Rey Arellano. Momentum behind this effort by justice activists has been building for months, but the release of a third-party report detailing a culture of racism at the department, and the weekend killing of a man in Southeast Austin by an APD officer, has accelerated the calls for new leadership.

On Friday, April 24, 42-year-old Michael Ramos died after being fired upon by APD officers as he attempted to leave the scene of an encounter at an apartment complex near Oltorf and Pleasant Valley in South­east Austin. Bystander video shared on social media shows that one of the two officers engaging Ramos fired at him with a non-lethal beanbag – while his hands were in the air. Ramos then got back in his car and began driving away, at which point the second officer fired his rifle at Ramos. He was taken to the hospital where he died that evening.

“This deadly shooting demonstrates what happens when long-awaited changes are shelved or not taken seriously.” – Public letter to Mayor Adler

As is standard procedure, an internal investigation has been opened into the actions taken by the two officers. At a press conference Monday, April 27, Manley announced that the Texas Rangers would assist in that investigation but did not explain how. An APD spokesperson says the Rangers have not participated in an APD Special Investigations Unit inquiry in the past eight years. In Dallas, however, the Rangers helped investigate the killing of Botham Jean by police officer Amber Guyger in 2018.

The officer who fired the beanbag, Mitchell Pieper, had three months of experience on the job, while the officer who fired the lethal shot, Christopher Taylor, had five years experience. On Monday, Manley confirmed that Taylor was one of the three officers who shot at and killed Mauris Nishanga DeSilva at a Downtown condo tower on July 31, 2019. The investigation into the DeSilva shooting is still pending.

The inquiry is expected to determine if Ramos was in possession of a gun. The initial 911 caller who alerted APD said that two people in Ramos' vehicle were doing drugs, and that a gun was visible. The bystander video clearly shows Ramos without a weapon before being shot with the beanbag by Pieper, but not whether a gun was present in the car. APD has completed a search of the vehicle but will not release its findings "until all interviews are completed."

Farah Muscadin, director of the Office of Police Oversight, is preparing to be heavily involved in the investigation into Ramos' death. She could not comment on the specifics of the probe but told the Chronicle via email she would "personally monitor the investigation" by sitting in on as many interviews as possible, reviewing all relevant documents and the investigative summary, and then making recommendations on what "policies, practices and discipline" should be considered. "More importantly," Muscadin wrote, "[I will] ensure that the investigation is fair and thorough."

One policy that could come under review directs how officers should respond to suspects in moving vehicles. In 2012, then-APD Chief Art Acevedo issued a new rule (General Order 202.1.3) that restricted "disabling a vehicle by use of a firearm" to "units specially trained in and equipped for this tactic and only under extraordinary circumstances."

At some point that policy was changed to eliminate special training requirements. Both the 2012 and 2020 versions of the order make clear that any officer can fire on a vehicle if it is being operated in "a threatening manner." But bystander videos and witness accounts clearly show Ramos driving away from the two officers.

Manley declined to comment on the bystander video showing Ramos with his hands raised. "This is a trying time in our community," the chief told reporters. "I share concerns, and that's why we're going to the extent we are – to ensure we not only conduct a thorough investigation ... but we do so in a way that fosters community trust." He added that multiple officers were at the scene, and that he would commit to releasing footage from their body and dash cams as quickly as possible.

In a statement issued by District Attorney Margaret Moore, she agreed it was important to get that footage out soon. "I will approve Chief Manley's release of body camera videos collected by police officers, as soon as is practicable," Moore wrote. "In this instance, I do not see how the release of these videos would compromise the investigation or any subsequent prosecution."

In a statement issued Monday morning, Mayor Steve Adler also noted how important that will be right now. "The use of force is the most potent and irreversible of a police officer's tools and requires trust between officers and the communities they protect," Adler said in the statement. "We must respond to this moment and also to the fear, anxiety and lack of confidence expressed by communities of color."

Council will meet in a special called executive session this Friday to discuss “legal issues related to the recent APD officer-involved shooting.”

As is their mission, the Austin Police Association and the Greater Austin Crime Commission are urging the city to not rush to judgment and for critics to refrain from calling for heads until the investigation is completed. "One officer-involved shooting is too many," APA President Ken Casaday told us. "But we have to have faith in the DA, the SIU, and the Texas Rangers to look at this. It's irresponsible to be commenting and asking for people to lose their jobs until we know more."

But activists point to Ramos' death as another sign of Manley's failure to reform APD despite clear direction from Council and the community. That's included calls since 2018 for reducing APD staffing, revising training, increasing transparency and accountability, and acknowledging the department has a problem with racial bias.

Justice advocates say APD leadership has been resistant to making those necessary changes. "This deadly shooting demonstrates what happens when long-awaited changes are shelved or not taken seriously," community groups wrote in a letter to Adler, Council, and Cronk calling for a change in leadership at APD. "But it has become clear to us that actual change – as opposed to words about change or promises of future change – is not a priority for the current leadership of the Austin Police Department."

Along with the firing of Manley, Gay, and Arellano, the letter – signed by the Austin Justice Coalition, Grassroots Leadership, and Just Liberty, among other reform advocates – calls for an independent investigation into Ramos' death, the delay of the June police academy class, and immediate "training reforms to ensure that cadets are adequately trained in de-escalation as part of all use-of-force and scenario training."

The letter says that "culture change in a police department requires a vision for where the department must go, both on the sworn and on the civilian side of management," and that Manley and Arellano are not "visionaries in the rapidly changing world of policing and public safety." Some point to Manley's response to Council's vote to limit city enforcement in marijuana cases – with a press conference the next day stating officers would not change their current practices – as an illustration of the chief's position on reform.

Some believe that Manley's long history at APD makes him ill-suited for reforming the department. He rose through the ranks at a time when policing looked different, the letter argues, and equity was not as much of a concern. "APD tried this whole approach about moving someone up from within," Austin Justice Coalition co-founder Chas Moore told the Chronicle. "But APD has to do some tremendous soul searching to achieve real reform, and we don't think Manley is the one to do it."