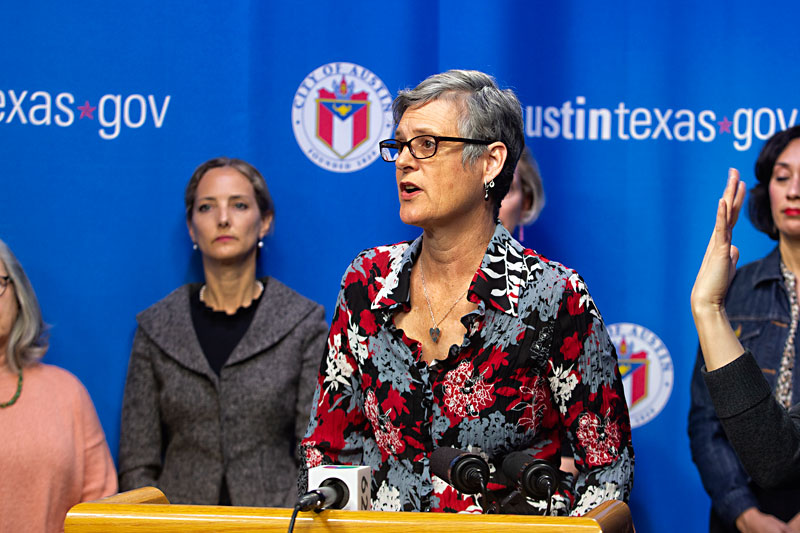 On March 10, Travis County Judge Sarah Eckhardt announced she would step down to run for state senator. Two weeks later, March 23, she said she would postpone her official resignation until May 13 – the filing deadline for the July 14 special election to succeed incumbent Sen. Kirk Watson. While the postponement has been welcomed by the County Commissioners, there has also been some public backlash.

When Watson announced his resignation to accept a deanship at the University of Houston, his decision evoked a litany of praise for the longtime local official – followed by a scramble of possible successors. Officially, two current officials – House District 51 Rep. Eddie Rodriguez and Eckhardt – have declared themselves candidates for senate. Three other people – Austin City Council Member Greg Casar (who appointed a campaign treasurer) and local attorneys Adam Loewy and Chito Vela – have expressed serious interest.

Shortly after Eckhardt announced her resignation, Gov. Greg Abbott set the SD14 special election (wihich under state law would have been in May) on July 14 due to the COVID-19 pandemic; soon thereafter, the primary run-offs were also moved to that date. That meant the filing deadline for SD14 became May 13 – creating an unusual situation at Travis County Commissioners Court. Under the Texas "resign to run" law, Eckhardt initially (March 10) announced she would step down as judge, to be succeeded on an interim basis by former County Judge Sam Biscoe. In the light of the extended filing period and in the context of the COVID-19 crisis, on March 23 Eckhardt announced she would stay on until the mid-May filing deadline. In the meantime, Biscoe has moved into an advisory role, while Eckhardt focuses primarily on addressing the pandemic.

"I didn't 'unresign,'" Eckhardt told the Chronicle. "I just have a job to do." Under the arrangement approved by the commissioners, Biscoe has agreed to assist Eckhardt for the next six weeks, and at the filing deadline, the roles will be reversed: Biscoe takes over as interim judge, and he plans to appoint Eckhardt as an emergency manager for pandemic response. "We get the best of both worlds," said Pct. 2 Commissioner Brigid Shea. "Sarah is an extremely capable official, and Sam is helping take on this enormous responsibility during this transition time. We were very grateful for his willingness to serve."

Not everyone has welcomed the change in plans. While declared opponent Rodriguez told the Chronicle that judgment is "for other people to say," a source close to his campaign called Eckhardt's two-step "irresponsible." Potential opponent Loewy told the Texas Tribune he would review the relevant law, adding, "She never should have quit in the middle of a crisis." The harshest criticism came from former county judge Bill Aleshire, who contacted reporters and the commissioners to denounce Eckhardt's "stalling departure."

Aleshire wrote that Eckhardt "does not have the legal choice to stay," then acknowledged that until Biscoe takes his oath of office, Eckhardt remains judge. Aleshire didn't stop there, calling Eckhardt's action "selfish," "unethical," and reflecting "arrogance." "Sarah Eckhardt is not smarter than the more experienced, former County Judge, Sam Biscoe," wrote Aleshire, "if that is what she is implying by saying she should stay. How disrespectful! Damn, this is why I hate (racist) 'liberals.'"

Eckhardt declined to respond directly to Aleshire's attack, and Shea and Pct. 1's Jeff Travillion dismissed his criticisms as exaggerated and irrelevant. "We consulted legal counsel, and we discussed all this with Eckhardt and Biscoe," said Shea, "and we were unanimous in feeling this was a good idea." Travillion called Eckhardt's decision "a very honorable act" and also praised Biscoe's willingness to serve. Referring to the pandemic, Travillion said, "Right now we have enough challenges and issues that we need every hand on deck, and there is great value in a situation where we can all work together. ... I don't need to fight about who's getting the resources to people in need."

County Attorney David Escamilla issued a formal opinion letter on March 19, arguing that not only is Eckhardt's continuation in office legal, she "is required [emphasis in original] to continue performing the full duties of the Office of County Judge until her successor is duly qualified" (i.e., has been sworn in). Biscoe was unavailable for comment to the Chronicle this week, but earlier told KXAN-TV concerning the pandemic, "There are big issues... but I have done these kinds of issues for and at Travis County for a long period of time."

Rodriguez, Eckhardt, and the other officials are focused on the crisis for now. On the day we talked, Rodriguez said his immediate project was to assist local officials helping the homeless population, and working with other Democrats to persuade Gov. Abbott to declare a statewide response to the emergency. "We're all in the same boat," he said. "We need to have the same life jackets."

While he did cite his 18 years in the Lege as uniquely qualifying him for the Senate seat, Rodriguez said, "I'm not really campaigning – I'm trying to help my constituents and people around the state." Eckhardt said her priority is to persuade residents to continue "reducing personal and business interactions by 90 percent to flatten the [infection] curve." She said her candidacy will be a way to promote more "public service-driven decisions" in the Senate, and she foresees a "win-win" if both she and Rodriguez end up in the Legislature.

The two-month delay means that voters as well as candidates can think less about campaigns and more about how best to respond to our common crisis. "There is nothing nefarious going on here," said Commissioner Shea. "We're doing something that is logical, and we're fortunate to have both of these officials available to serve through this transition."

A version of this article appeared in print on April 3, 2020 with the headline: Sarah Eckhardt’s Long Goodbye