City Hall is here to help 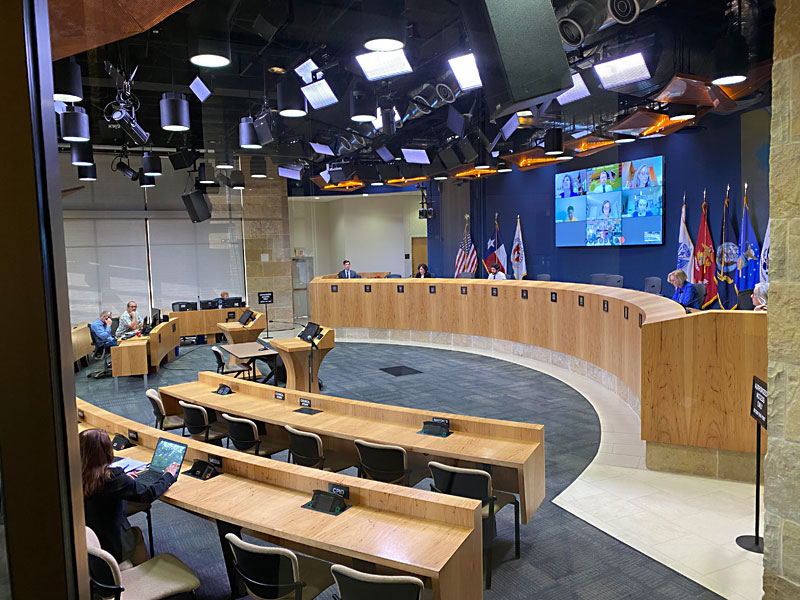 Council's virtual reality: half the members on Zoom, the rest spaced six feet apart on the dais. (Photo by Austin Sanders)

Last week's City Council meeting – the first conducted semi-remotely under COVID-19 shelter-in-place rules – was dominated by City Hall's response to the pandemic, now and in the future. In addition to a 60-day moratorium on evictions, Council passed a sweeping resolution directing City Manager Spencer Cronk and his departments to find options for relief to the workers hit hardest by the pandemic thus far: those in the creative, hospitality, service, retail, restaurant, music, child care, and construction sectors among them.

City staff is tasked with sourcing PPE and sanitation supplies, identifying ways to combat food insecurity, and even providing “resources for virtual social participation to reduce isolation and loneliness.”

Among the specifics identified in the resolution, initiated by Council Member Jimmy Flannigan weeks ago and enhanced through lengthy debate on the Council message board: The definition of "emergency workers" with guaranteed access to childcare could be expanded, and hotel occupancy taxes could be repurposed to help the hospitality industry. City staff is tasked with sourcing personal protective equipment and sanitation supplies for medical workers and child care facilities; identifying ways to combat food insecurity; and even to provide "resources for virtual social participation to reduce isolation and loneliness."

In all, the resolution creates a mountain of work for city staff, without a specific timetable; it's expected that as soon as a program is ready for Council approval, staff will bring it forward. Cronk made clear that although it's still early, "everything is on the table," and he doesn't need more direction from Council to develop the city's COVID-19 response.

But toward the end of the meeting, CM Greg Casar acknowledged that the city's actions alone would not be enough. The risks and sacrifices required to protect public health would primarily be borne by working class families, he said: those who have to keep showing up to their jobs "because they work with their hands." He added, "We have to stand up and refuse to choose between people getting sick and dying, and losing their jobs and income. We have to save those lives and make sure, regardless of the challenges, [that] everyone in the city can meet their needs."

Many of those Austinites work in construction, which is generally not exempt from the "Stay Home, Work Safe" order. In response to major pushback from developers and builders, the city's also issued updated guidelines for projects that can proceed. These include public works and "critical infrastructure," those with on-site affordable housing, and "wind down" projects working to safely close up shop. The City Manager's office is evaluating public works projects on a case-by-case basis.

Developers who think their projects are "vital to the security, governance, public health, safety, and economic continuity" of the city (that would make them "critical infrastructure") must apply for a waiver, and a multi-department city committee will either allow work to continue with social distancing and hygiene measures (including daily disinfection of tools and temperature screening of workers), or establish parameters for the project to wind down. The committee's decision is final.

In a statement issued on Friday, March 27, the Real Estate Council of Austin asked the city "to take a more measured approach to the construction ban." RECA CEO Dianne Bangle cited the more relaxed rules in Dal­las and Houston and wrote, "Imple­menting this construction ban will devastate construction workers and small businesses. These communities will permanently leave our city to find work in other cities [that] will allow them to continue to work safely and support their families." At press time, RECA confirmed to us that their position had not changed despite the updated guidelines.

However, the executive order issued by Gov. Greg Abbott on Tuesday, March 31, which generally mirrors Austin's local orders, in other respects, includes residential and commercial development in its definition of "essential activities." A spokesperson says the city is studying Abbott's order to "determine whether any changes need to be made regarding current restrictions and rules on construction."