Austin Hunkers Down and Waits as the Pandemic Grows 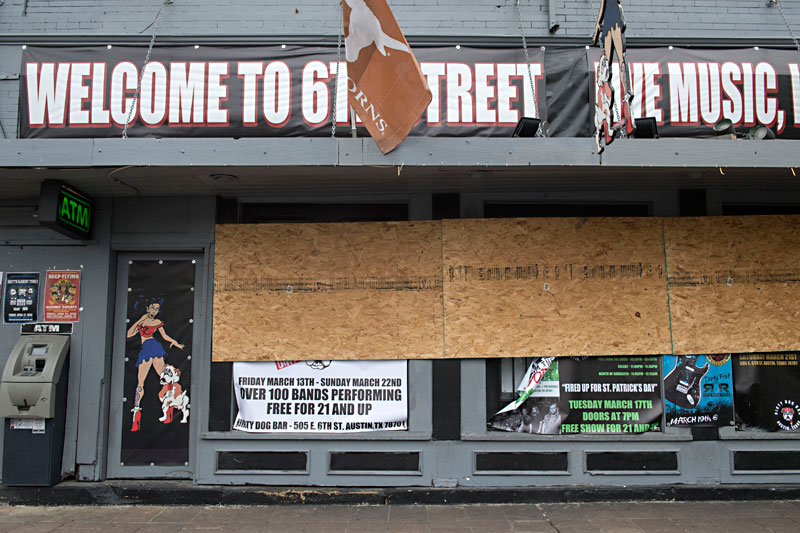 Not-so-Dirty Sixth Street bars, devoid not just of tourists but of any customers at all, have been boarded up to weather the COVID-19 storm. (Photo by John Anderson)

What a difference 10 days makes. On Tuesday, March 17 – at what would have been the peak of Austin's spring festival season – Mayor Steve Adler and Travis County Judge Sarah Eckhardt ordered that all bars and restaurant dining rooms be shuttered to slow the spread of COVID-19, the disease caused by the novel coronavirus, through at least May 1. Community gatherings of 10 or more are prohibited.

As Austinites are urged to take the pandemic seriously and be diligent about social distancing, restaurants have not been shut down entirely; take-out, drive-through and delivery food service is still allowed, with increased sanitation protocols and measures in place to protect the health and safety of food service workers and of the food they prepare. The city is considering bringing on additional health inspectors if it can, said Austin interim Health Authority Dr. Mark Escott.

But the call to go out and spend money and help the industry, offered by local leaders in the immediate wake of the cancellation of South by Southwest – including by Adler, Eckhardt, and state Sen. Kirk Watson in a now-cringeworthy video, complete with tequila shots, filmed at Hoover's Cooking on Manor Road – is of course no longer operative. "Obviously, if I knew then what I know now I wouldn't have done the video," said Adler on Tuesday, acknowledging that advice gave some cover to "millennials and younger folks who are still going out. ... Those of us who are not at the greatest risk can pose the greatest risk to others."

So what constitutes a prohibited "community gathering," and what sorts of establishments are excluded? The 10-or-more limitation applies to people in a single room or "confined indoor or outdoor space" at the same time. The restriction does not apply to government buildings providing essential services, schools or colleges, pharmacies, transit and transit facilities, the airport and airport operations, and hospitals and medical facilities. It does include weddings and funerals, religious services, and sporting events. Parks and playgrounds remain open, but most pools, recreation centers, and gyms are closed.

“My belief is that, given the gravity of what our community will face if we’re not successful, I really do believe that everyone will be pitching in. But the rules are rules and they are enforceable.” –Austin Mayor Steve Adler

The order also exempts "grocery stores," which really means a broad category of retailers that sell food products or household staples, including pet supplies, hardware stores, food pantries, and gas stations. Other retailers are, at present, allowed to stay open subject to the social distancing guidelines, though many have announced limited hours as well as special hours set aside for seniors and other vulnerable populations. Simon Property Group, the nation's largest operator of shopping centers, is closing its malls nationwide through March 29; this includes Barton Creek Square, Lakeline Mall, much of the Domain, and the Round Rock and San Marcos outlet malls.

What happens if you blow off these orders from the authorities? Technically, it's a misdemeanor offense, punishable by fines up to $1,000 or jail time up to 180 days. However, all the courts in the county are on hiatus, steps are being taken to reduce the local jail population, and the Austin Police Department on Tuesday announced operational changes to reduce or eliminate officer response to non-urgent calls. (This includes traffic enforcement.) "The first step would be self policing and reminding others," Adler said Tuesday. "My belief is that, given the gravity of what our community will face if we're not successful, I really do believe that everyone will be pitching in. But the rules are rules and they are enforceable."

What is more frightening to more people, of course, is what happens if we do follow the rules, at great personal cost. "We recognize the economic hardships [are] every bit as large as those posed by the virus itself," said the mayor. While Adler and Eckhardt both said that "many efforts" to mitigate economic impact and help residents and businesses in need are being pulled together at the local level, they noted that state and federal action will be required to get extended unemployment assistance, debt relief, temporary Medicaid expansion, increased funding for guaranteed small business loans, and other measures that will be needed to recover from COVID-19 as from any other disaster. As of press time, the size and contours of a prospective federal stimulus and relief package, including direct cash payments to all Americans, was being hotly debated in Congress.

As local advocates for justice and equity call for far-reaching measures to soften the blow on the most vulnerable, local leaders are scrambling to get new relief services in place and to highlight the existence of current ones. Austin Assistant City Manager Christopher Shorter and Economic Development Director Veronica Briseño on Tuesday highlighted the city housing department's mortgage and rent assistance programs; curbside meal distribution for seniors (a partnership between the city parks department and Meals on Wheels and More); the Texas Workforce Commission's unemployment insurance process; and business resources provided by Briseño's department including consulting and a family business loan program. Eckhardt also promoted Workforce Solutions' local middle-skills job training initiatives, part of the community workforce plan championed by her and Adler, to help people now facing indefinite employment insecurity. All eviction proceedings in Travis County are on hold, and Austin Energy, which handles billing for all city utilities, has not only suspended customer disconnections for nonpayment but also is working to restore service to those who'd been recently shut off.

In addition to these local resources being marshalled to "help bridge the gap until the crisis is passed," Adler urged "vendors and landlords to recognize that the old rules are out the window right now," calling for "forbearance and a spirit of cooperation" as residents and business struggle with rent and expenses during weeks of potential lost income. "Workers and businesses, right now, need help," the mayor said. "We don't have all the answers right now, but we will be trying many new things, because of the gravity of the situation." He and Eckhardt also urged patience and generosity – "tip more than you ever have before" when getting food to go or taking in virtual live music performances, said the mayor. "As we maintain physical distance we need to work more closely together than we ever have before."

Austin and Travis County's control orders were coordinated with similar moves in other major Texas cities, and Interim Health Authority Dr. Mark Escott said the city and county are "encouraging our neighboring communities and the state to consider urgent measures now so we can flatten the curve quickly." As of press time, COVID-19 cases had been reported in both Hays and Williamson counties as well as Travis. Gov. Greg Abbott had expressed reluctance to impose statewide mandates during the outbreak, but plans to announce new policy directions on Thursday, March 19. (As of press time, neither the Texas Attorney General nor the Texas Public Policy Foundation had agreed to drop their lawsuit that's stayed implementation of Austin's paid sick leave ordinance, as Adler has requested.)