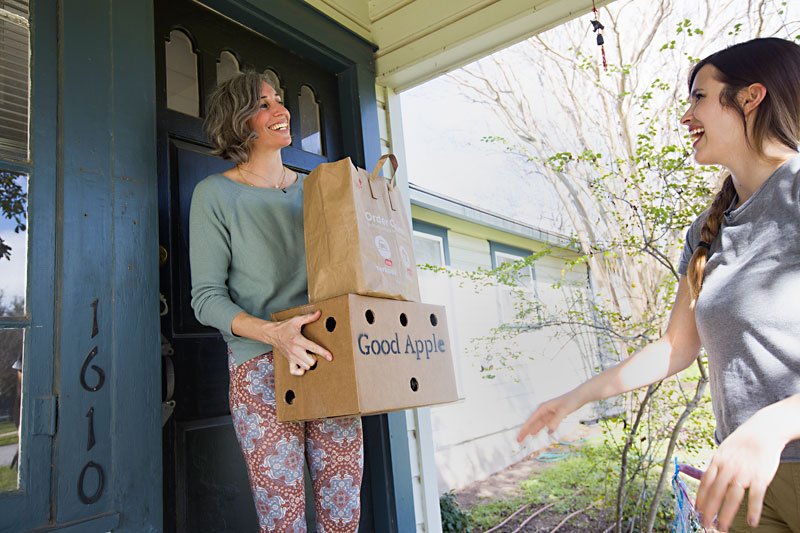 Zoe Mantarakis, a single mother living in Austin, struggled to feed her three children. She said she hopped between food pantries, only able to use each pantry once a month. While standing in line at one, though, a woman tapped her on the shoulder.

"She invited me to this program, Good Apple, and said she wanted to invite me to get deliveries," Mantarakis said. "Programs like this are what just tip me over, so I can keep going."

Good Apple partners with local farmers to deliver unsold produce to customers paying for a subscription, and then uses those profits to deliver produce to families facing food insecurity.

Good Apple was recently awarded $75,000 in the Austin City: One Challenge for its efforts to address food insecurity in Austin. For the City: One Challenge, the city of Austin collaborated with Ford Motor Company and other partners to fund ideas for improving East Austin mobility.

Zack Timmons, Good Apple CEO and founder, said he conceived of the idea for the company while working at clinics as a medical student at Dell Medical School.

"We'll see [patients] in clinic and we'll be taking social histories, trying to better understand where they're coming from," Timmons said. "Things like putting a healthy meal on the table are really important to them, and as future physicians, food insecurity is particularly worrisome given the different health impacts."

Timmons said he discovered that Austin's rate of food insecurity is higher than the national average, and he felt like he could provide the resources to address that need.

"Where we step in is getting families food directly to their doors," Timmons said. "There are transportation barriers and time barriers and for a single mother of three, it can be super hard to access food."

"You'll hear a lot of people talk about how food is medicine, and during our first two years of medical school, it became very apparent that we're addressing all these medical conditions, but we're not addressing the most fundamental problems."

Mantarakis, one of Good Apple's impact clients, fills out a form to request what foods she wants. Now, she receives a delivery from Good Apple weekly.

"We're eating foods that are whole, nutritious, and not just out of a box, which feels good," Mantarakis said. "When money is tight, you're not going to step outside of the box, so I'd just buy the staples: bread, peanut butter and jelly, pasta, rice. I consider fresh fruits and fresh vegetables a luxury, but if I'm able to receive it, it's a blessing."

Mantarakis said she teaches yoga at multiple locations in Austin, and is a professor of yoga at UT Austin.

"I work as hard as I can, and it's just hard to pay the bills and cover all our needs and costs," Mantarakis said.

Timmons said Good Apple currently has 10 employees. He said he may not stay with the company after graduating because medical residency will take up a lot of time, but he wants to set the company up to be successful without him.

"Sometimes, with these companies, you want to see something live on for a while," Timmons said. "Hopefully, we can create something long-term with the grant. Our big goal for the next few months is to get it large enough to hire someone to do the work, so it will go on after we graduate."