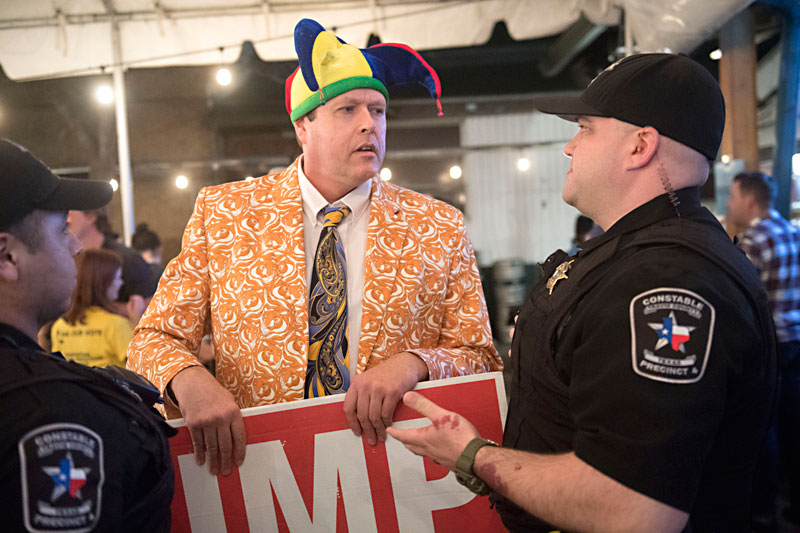 Travis County constables ask former Travis County Republican Party Chairman Robert Morrow to leave the Progressive Election Night Meetup watch party at Scholz Garten on Tue., March 3. The jester-hat-wearing provocateur, who has a history of incendiary behavior (like his "Trump is a child rapist" sign, in tow Tuesday night), advanced to the run-off for the District 5 seat on the State Board of Education. (Photo by John Anderson)

Mathias to Depart School Board: Eastside voters will choose a new representative in the D2 seat on the AISD board of trustees, as two-term incumbent Jayme Mathias announced he will not seek reelection. He made history in 2012 as the district's first openly gay trustee to serve on the board and has advocated for a public school system more inclusive of LGBTQIA identities.

LDC Third Reading: The city this week announced the schedule for the third and final reading of the Land Development Code Revision: There'll be public comment March 24 & 28, and Council will meet March 31 through April 7. The city also released Supplemental Staff Report No. 4; see the Code Drafts tab at www.austintexas.gov/ldc.

Not So Fast? Meanwhile, the lawsuit challenging the city's right to do that LDC rewrite without allowing protest rights for property owners is set for Monday, March 9, at 9am in the Travis County Courthouse. The deadline for submitting such a protest (should the court decide to grant protest rights) is March 25, if our math is right.

Increase Cop Transparency: A new APD policy regulating the release of video of "critical incidents" could be in place this month. Under the new policy, developed with the Office of Police Oversight, dash and body cam footage of incidents in which an officer fires a gun, injures or kills someone, or someone dies while in police custody, will be released within 90 days – though the police chief can delay the release if they deem it necessary to protect an investigation or an individual.

Voters Turned Out: Voter turnout in Travis County grew in the 2020 presidential primary by about 16% compared to the 2016 primary, continuing a trend of record turnout following Donald Trump's election. 225,108 Democrats voted by March 3 – a 55% increase from the number of Dems who voted in '16.

Delay by Design: Responding to lengthy voting lines, state Rep. Celia Israel, chair of the House Democratic Campaign Committee, noted that the delays are the consequence of deliberate Republican policy. "We surpassed 2016 turnout by over 200,000 voters, and lines were hours long – which shows both the extent of the excitement on the ground and the extent of the damage done by Republicans who shut down polling places."

Ending Access: The Supreme Court heard arguments in June v. Gee this week, a Louisiana case in which the state imposed unnecessary regulations on abortion doctors and clinics to block access while not directly overturning Roe v. Wade. Similar restrictions in a 2016 Texas case were ruled unconstitutional.

Transit Plan Coming: Project Connect, the plan for our transit future from the city and Capital Metro, is due to be released this Mon., March 9.