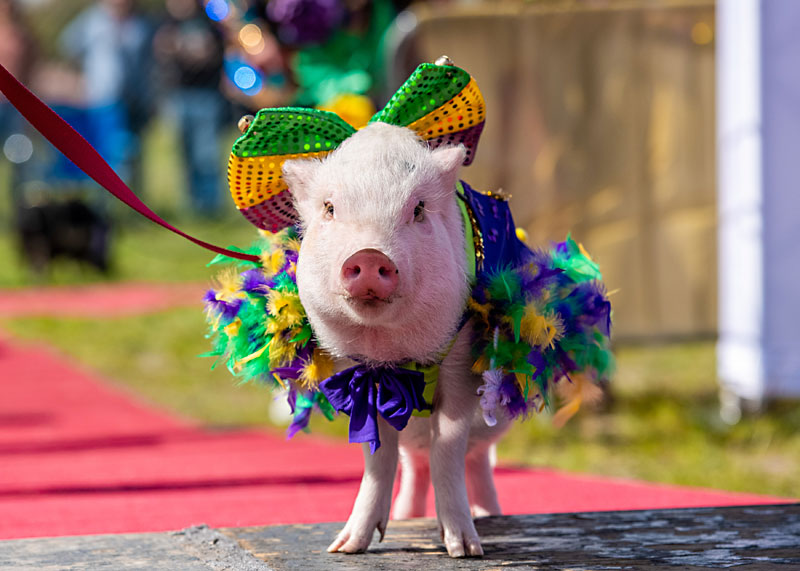 It was billed as a pig pageant, but Saturday's event in the field across from Mueller's Rebel Cheese was so much more than that. It was an expo for all the "sideshows" of the animal rescue community, as explained by pageant emcee Dan Illescas of Central Texas Pig Rescue, the group putting on the whole shebang. Austin Bat Refuge brought fuzzy bats to pet, Austin Farm Sanctuary brought a pair of goats, House Rabbit Resource Network had two adoptable bunnies, and Tito the tortoise represented Austin Wildlife Rescue. Rescued Sanctuary for Animals and other orgs had reps on hand to educate attendees about their work. There was also an abundance of compassionate cuisine from Austin's finest vegan vittle purveyors, and Minor Mishap Marching Band and Blowcomotion kept things popping while hula hoop dancers amazed the eyes. 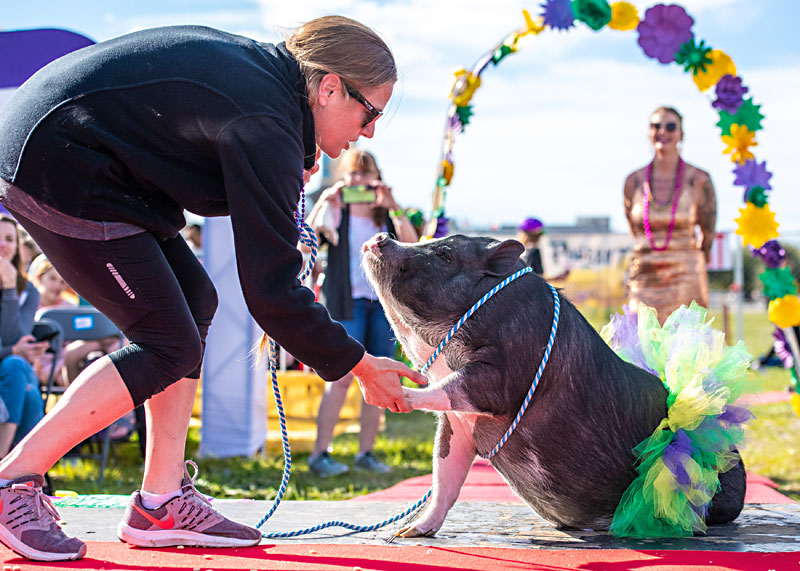 Of course, the swine were the stars of the show. But why do pigs in the city need rescuing in the first place? According to the emcees, who spoke about CTPR while the talent prepared to strut down the pigwalk, there's a destructive "micro pig myth" – meaning breeders sell pigs that they claim will stay small (20-40 pounds) if kept on a special diet, which isn't true, and restricting a pig's food intake leads to health problems and even death. When pets outgrow expectations, pig parents often become overwhelmed and surrender them to CTPR. According to CTPR, only 2-5% of those who bring a pig into their family as a pet end up keeping them. Pageant emcee Tracey Stabile was brought to tears explaining how deeply pigs grieve when abandoned; they are emotional animals with the intelligence of a 2- to 3-year-old human child, so it is not unheard of for a pig to die, essentially, of a broken heart.

So this pageant was an opportunity to educate the public about what pigs are really like. They are amazing animals – perceptive, smart, loving, each with their own personality. They can be excellent support animals; in fact, several contestants are employed as such, including Hammy, who saved his family from fire and can sense when someone's on the verge of a seizure. However, pigs aren't for every household, so the participants made it clear that before adopting, you should be aware of the realities of pig parenthood.

I left with a greater understanding of how truly cool pigs are, information on all the nontraditional rescues in town, and a painting created by two pigs who are best friends. Everyone was a winner on Saturday, but Gumbo, who came with his own mini Mardi Gras float, took first place. See him and all his animal friends in our photo gallery at austinchronicle.com/photos.

A version of this article appeared in print on March 6, 2020 with the headline: Go Pig or Go Home

Guide to 4/20 in Austin
Everyone needs to chill out