Paul Cruz Steps Down at AISD 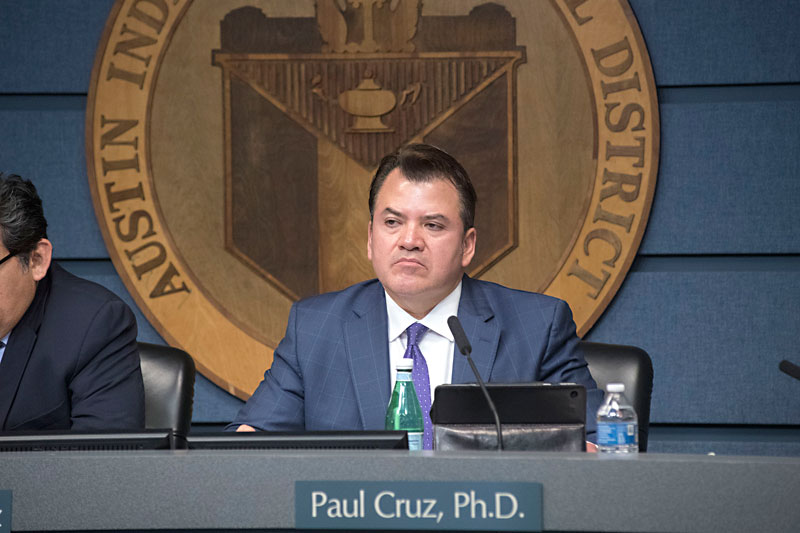 After six years at the helm, Paul Cruz will resign as superintendent of the Austin Independent School District, per an announcement posted on the district's website Wednesday evening, Feb. 19.

Cruz isn't going far; he's headed to the University of Texas to become a professor of practice in the College of Education's Cooperative Superintendency Program – where he will essentially help train the next generation of superintendents. (It's the same program where Cruz earned his own doctorate.) Before assuming the top job at AISD, Cruz served as the district's chief schools officer during the rocky tenure of his predecessor Meria Carstarphen.

“I love Austin ISD!” Cruz wrote in his parting statement. But that love was not always reciprocal.

"I love Austin ISD!" Cruz wrote in the statement, shared with AISD parents and via social media. "Thank you for embracing my family, for educating my children, and for entrusting me with leading our strategic efforts. It has truly been an honor to serve as superintendent of Austin's dynamic and high-performing school district."

But that love was not always reciprocal, especially among parents at Metz, Pease, Sims, and Brooke elementary schools, who fought tooth and nail for months to keep their campuses from closing. In addition to overseeing the fraught School Changes process that led to those closures, and perhaps more to come, Cruz oversaw the development and began the implementation of the $1.05 billion 2017 Bond Program – the largest in AISD history. But it's the emotionally charged school closures – which previous district leaders had been unable to accomplish, despite many considering such decisions necessary for over a decade – that will mark Cruz's legacy at AISD.

A new work environment was likely appealing to Cruz, who was hammered throughout the School Changes controversies – publicly and vocally by activists, and privately and quietly by some members of the board of trustees – for what they characterized as meek leadership in a tenuous time for the district. But Cruz stayed the course to lead the district through a difficult process that, he said, will help student success through reinvestment of resources from closed campuses into supports aimed at helping struggling students.

In a statement, board of trustees Presi­dent Geronimo Rodriguez said: "We appreciate Dr. Cruz's 14 years of leadership service to AISD students and their families." Rodriguez also indicated the board would begin to discuss the transition process, which is still up in the air. Technically, Cruz has not resigned – he's just announced his intent to do so, having accepted the new position. His AISD contract was most recently extended in October 2018 and does not expire until Dec. 31, 2021. Before that end date, Cruz can resign without board approval on June 30 of this year (or next); assuming he starts working at UT before then, he'll need to negotiate a new departure date with the trustees and then can officially submit his resignation.

Private talks between Cruz and the trustees at the Feb. 24 board meeting lasted for more than an hour, but as of press time the board has not announced a formal plan. In a statement issued on Wednesday, Feb. 26, Rodriguez said, "In the coming weeks and months, the Board and Dr. Cruz will work together to establish a preliminary timeline and a transition plan that maintains the momentum of our current work and honors the District's priorities."

Rodriguez added that as the process of replacing Cruz unfolds, the district is committed to establishing "a transparent process which includes meaningful community engagement and timely communication." Clearly, the board and central office want to avoid the turmoil that roiled the School Changes process and the fallout that followed it, which parents have attributed to bad communication from the district. Rodriguez expects a request for proposals will be posted soon to select a search firm that will help find a new superintendent, followed by a timeline from the board outlining the selection process.