Council Tries to Keep City's Trash Out of Hated Landfill

Waste not, what now? 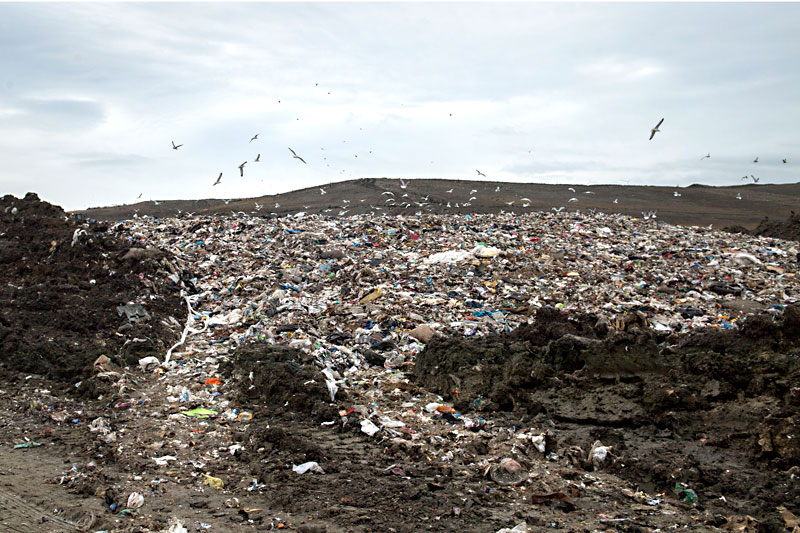 A city of Austin contract with Waste Management, Inc. to collect waste from city facilities and transport it to the Austin Community Landfill (ACL) is set to expire on Feb. 28, and it's unclear as the Chronicle goes to press what the future of that partnership will be.

A city spokesperson tells us that staff is confident that there will be no disruption in service, as they are working on "one or more" short-term contracts that would ensure trash is collected for the next few weeks while a longer-term solution is worked out. The contract in question does not cover the city's residential waste – the contents of Austin's curbside bins will still get collected by Austin Resource Recovery regardless of what happens with this contract, which covers collection of waste from 200 city-owned facilities, along with most of the waste collected from cleanups the city conducts at homeless encampments. A separate city contract with Waste Management provides collection for some residences (carts at duplexes and dumpsters at multi-family properties), but that contract does not expire until June 1; a new agreement is set to appear before Council on April 9.

Waste Management takes what it gathers under these contracts to the unloved and often controversial ACL, located in Northeast Austin (but outside the city limits) near US Hwy. 290 and Cameron Road. That's the heart of the problem, and the reason that staff from ARR and the Purchasing Office received a stern talking-to from City Council last week on Feb. 20. At that meeting, staff presented Council with an emergency six-month contract with WM to continue service, but that was rejected on a unanimous vote. Now, staff is drawing up short-term contracts (likely to fall under $50,000 – the maximum that City Manager Spencer Cronk can authorize without Council approval).

For decades, city leaders have tried to reduce and eliminate Austin's use of the ACL, which was first opened in 1970, when fewer people lived near the site and rules regulating such sites were less strict. "The existence of this facility is a prime example of the evolution of a municipality," Council Member Natasha Harper-Madison, whose Dis­trict 1 includes the dump, told us. "We didn't require the same best practices for managing a landfill that we do now, but those parameters have changed. We can't fix what was put into the dump 30 years ago, but we have to recognize it's been a bad actor for far too long and now we have to shrink and stop its use altogether."

In recent years, Council has taken steps to make that goal a reality. In 2019, it changed the boundaries of Austin's extraterritorial jurisdiction to no longer include the ACL; the thinking was that Travis County has greater power to exert in environmental regulation than the city does, so the Commissioners Court would have a better chance at ending use of the ACL, which it has also sought to do. Meanwhile, Waste Management has asked the Texas Commission on Environmental Quality for permission to open a new transfer station at the ACL, which could result in 669,000 tons of waste sent to the facility each year; neighbors, environmental advocates, and even aircraft pilots (citing the risk of bird strikes) strenuously oppose these plans.

Waste Management wants permis­sion to open a new transfer station, which could bring 669,000 tons of waste to the facility each year.

But the city has direct control over where its own waste goes, which led to creation of the "landfill criteria matrix" – a set of guidelines, built through a stakeholder process, for staff to use when soliciting contracts to collect the city's trash, recyclables, and compost. Implementation of those guidelines has caused the current situation, with staff rushing to approve short-term contracts for city facility waste – as it turns out, it's hard and expensive to find a vendor that can both meet the waste needs of the various city departments and align with the values outlined in the matrix.

A Council working group formed in 2017 issued a policy guidance on developing the matrix, aimed at achieving broad goals like lessening the impact of landfills on communities of color, using waste diversion to reduce the city's carbon footprint, considerations of the amount and type of waste, and the existing levels of hazardous materials at a particular landfill. The matrix ARR produced based on that input did not satisfy the Zero Waste Advisory Commission, which rejected the proposal – meaning Council never got to vote on the matrix either. In a memo issued Nov. 9, 2018, then-interim ARR Director Sam Angoori wrote that the department would move ahead with the matrix it had because, well, the trash has got to be picked up.

As a result, ARR began gathering feedback from city departments to better understand their waste needs, to inform an intended bid process for a contract that aligned with the matrix and met departmental needs. Per a city spokesperson, that work has been more complicated than expected. "It took longer than expected to identify and adequately plan for the different trash, recycling and composting needs of all City facilities," the spokesperson wrote in response to our questions.

"The City is working to provide comprehensive cost-efficient waste disposal and recycling services to all City of Austin departments," the spokesperson added. "The current contract for these services expires at the end of February and a solicitation for a replacement contract is being finalized and will be published soon."

Whether or not Waste Management will be that partner remains unclear. In a statement, the company told us WM "serves at the pleasure of our customers and in accordance with our contracts with customers. If the City of Austin chooses not to renew our existing contract to provide waste services to city department buildings, we wish the City well. WM stands ready and able if current circumstances change." Translation: the ball is in your court, city of Austin.

For CM Leslie Pool, who chaired the policy working group that developed recommendations for the matrix, the whole situation has left her "astonished." She said Council has been clear in how it wants staff to proceed with solicitations for landfill use, and the last-minute nature of this contract renewal is "beyond belief." (The emergency renewal was presented on the Feb. 20 agenda, but per staff, Council was notified of the item through the Recom­mend­ation for Council Action process on Feb. 7.)

"I am done with excuses," Pool told us. "A renewal for use ... should never have even been an option. The one thing we can do is stop sending the city's waste there. If I was city manager, that's what I would be expecting to happen."

A version of this article appeared in print on February 28, 2020 with the headline: Waste Not, What Now?