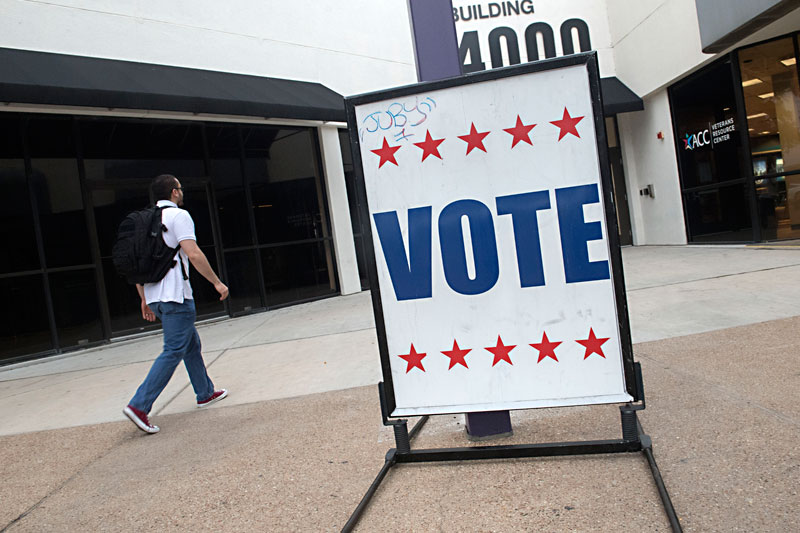 Early and Often: Early voting in the March 3 primary elections began Tuesday, Feb. 18, and runs through Fri., Feb. 28. You can vote at any Travis County Vote Center, with locations and details available right here and on the Travis County Clerk's Election website.

About That Primary: The latest UT/Texas Tribune poll of likely Democratic primary voters puts MJ Hegar at 22% and another half-dozen Democratic U.S. Senate candidates between 5% and Cristina Tzintzún Ramirez at 9% – with 40% choosing either an also-running candidate or nobody.

Cruz Bids AISD Adieu: On Wednesday (Feb. 19) Austin Independent School District Superintendent Dr. Paul Cruz announced he is resigning his position for a new role at UT, according to a letter posted on AISD's website. As of press time, Cruz, who served as superintendent for six years, has not confirmed when he will leave his position.

Spike in Traffic Deaths: On Feb. 19, the Austin Police Department reported the 19th fatal traffic crash this year, bringing the total number of traffic fatalities in 2020 to 20. At this time last year, there had been seven traffic deaths. Though Austin aims to reach zero traffic-related deaths and serious injuries by 2025 as part of its Vision Zero plan, a city auditor report last September found the plan's goals "unlikely."

Kind Clinic Expands: Nonprofit Texas Health Action has announced it's opening a South Austin location of its sexual health and wellness program, Kind Clinic, this fall. The new 6,550-square-foot location will be the first of THA's clinics to have an in-house pharmacy. Kind Clinic, which has locations in Central and North Austin, provides STI testing, access to HIV prevention drugs PrEP and PEP, and gender-affirming care and hormones.

No New Shelter Beds Yet: City staff can't say when the 87-room Rodeway Inn will open as a shelter for people experiencing homelessness. The motel purchase is expected to close in April, but renovations will be needed before the new shelter in South Austin can begin accepting tenants. The city has a goal of adding 300 new shelter beds in 2020, and staff expects to have more details soon on the timeline for opening the Rodeway.

Pipeline Proceeds: Federal district Judge Robert Pitman last week rejected an attempt by the city of Austin, Travis and Hays Counties, and other plaintiffs to stop construction of Kinder Morgan's Permian Highway Pipeline, planned to bring fracked natural gas from West Texas to the Gulf Coast for export. The judge said there was insufficient evidence of danger to endangered species along the route.