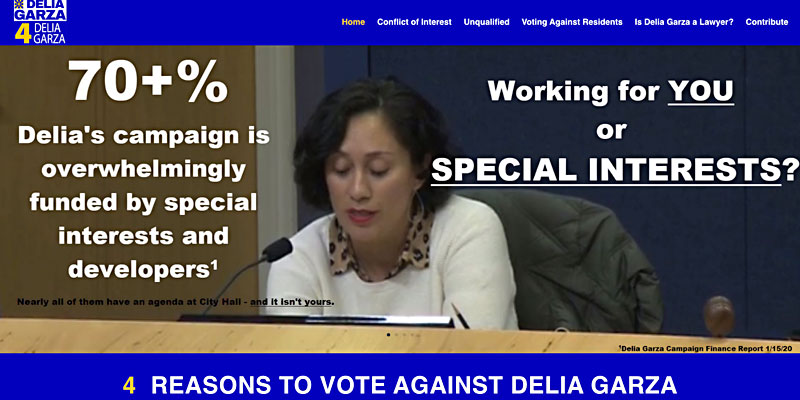 "I guess I should be flattered," said Mayor Pro Tem Delia Garza, currently a candidate for Travis County Attorney. "I have my first attack website." Garza was responding to the semi-anonymous, misleadingly named website – "Delia Garza 4 Delia Garza" – posted online a few days ago. The website amplifies claims already made against Garza on the campaign trail – that she serves "special interests," is "unqualified," and inexperienced – that have most aggressively been disseminated by former County Judge Bill Aleshire (who doesn't appear to be directly associated with the site). Garza has strongly rejected Aleshire's charges while wondering – like many observers – about his motivations. ("Former County Judge Rails Against Delia Garza," Jan. 10)

Who is actually behind the new site is rather murky. Otherwise un-labeled, a barely legible statement at the bottom of the home page reads "Political Ad Paid for by Austin Communities First PAC." That PAC's paperwork, filed Jan. 27 with the Travis County Clerk, says the treasurer is Monica Maldonado, and the "Decision Makers" are Maldonado, Fred Lewis, and Linda Bailey. Lewis and Bailey are both on the board of the anti-Land Development Code Revision group Save Our City Austin (which explains at least some of the hyperbolic anti-tax and property rights rhetoric on the site). A button on the site invites contributions.

There are no readily visible connections to the campaigns of Garza's opponents, but sources within the campaigns report that the site is apparently a project initiated by consultant Marc Duchen, who until late last year was working for the Laurie Eiserloh campaign. Asked if there was any connection between the campaign and the site, Eiserloh consultant*[correction below] David Weinberg said the campaign "had nothing to do with this website and has no information about its origin." That was subsequently reiterated by Eiserloh herself, who said she had "only just glanced" at the site.

"From my view," Eiserloh said, "we consider it to be a distraction. We've got plenty of issues to work within this race, and it's not my way ... I'm not about tearing people down." Asked if it was possible that Duchen was behind the site, she said, "If it was, I don't know about it." She said Duchen was very competent but had left the campaign by "mutual understanding ... it just wasn't working out." Eiserloh continued, "I would never recommend support or encourage somebody to do that sort of website or campaigning."

The other campaigns expressed similar sentiments. Attorney Dominic Selvera said he had earlier publicly denounced Aleshire's charges against Garza, reiterated that denunciation, and had a similar response to the anonymous site. "It's the way cowards operate," he said. Mike Denton's campaign issued a formal statement: "We are running a positive campaign focused on my record as a criminal justice reformer," it read. "We have not contributed to dark-money PAC's or encouraged anyone else to do so. All of our campaign's expenditures are fully reported and above board."

The problem with Eiserloh's denial is that a confidential source in a position to know said that Duchen's public departure from her campaign was in fact for the purpose of initiating this nominally "independent" opposition effort while providing Eiserloh and her official campaign with plausible deniability. The campaign firmly and repeatedly denies it. And calls by the Chronicle hoping to discuss the matter with Duchen, Lewis, and Maldonado were not returned.

Instead, "AustinCommunitiesFirst PAC" responded with an unsigned email, taking the opportunity not to answer questions, but to take more shots at Garza. "We started the site," it read, "because we are alarmed at the mounting evidence that Delia Garza is unfit to serve as Travis County Attorney." The rest isn't worth repeating; if you want a full dose of the anonymous rhetoric, you can track down the site yourselves.

Negative campaigning is hardly new, but Selvera's judgment of this particular campaign strategy seems apt. Garza said she finds it ironic that Lewis, who was one of the loudest supporters of single-member districts, gets so outraged when the 10-1 Coun­cil doesn't follow his preferences. "I think it's just the old guard wanting to hold on," she said. "I've been successful in being a reformer at City Hall, and they don't want that happening at Travis County."