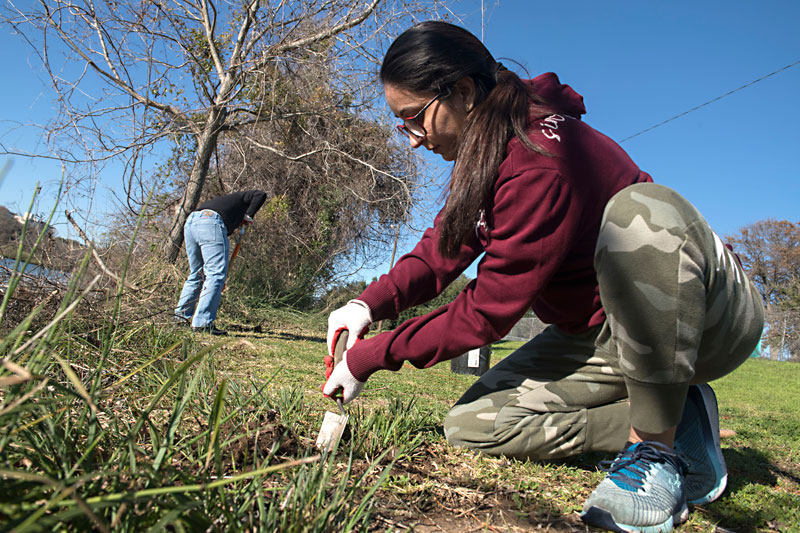 Volunteer Jasmine Vazirani plants a sapling for the Trail Foundation tree planting along the Roy and Ann Butler Hike and Bike Trail on Saturday, Feb. 1. Over the weekend, several hundred volunteers planted 2,200 native trees along the trail that flanks Lady Bird Lake. (Photo by John Anderson)

Prioritizing LGBTQ Health Care: On Tuesday, the Central Health Equity Policy Council voted to pursue the Human Rights Campaign Healthcare Equality Index accreditation as its 2020 policy initiative. As a national LGBTQ benchmarking tool, the HEI evaluates health care facilities' policies and practices related to the equity and inclusion of their LGBTQ patients, visitors, and employees. In 2019, the HEI evaluated more than 1,600 facilities nationwide.

Mind the Graduation Gap: On Jan. 31, the Michael & Susan Dell Foundation and UT-Austin launched a new partnership to close the gap in college graduation rates across income levels. Building on the Dell Scholars program model, the partnership supports the university's goal of increasing six-year graduation rates from 73% to 90% for all Pell Grant-eligible students at UT-Austin.

Welcome to 2020: The State Board of Education voted last week to approve (on first reading) new curriculum standards for African American Studies, the second ethnic studies curriculum for Texas high schools (following Mexican American studies in 2018). Texas Freedom Network Political Director Carisa Lopez said, "We encourage the state board to finish the job and give final approval to this course at its next meeting."

Pick Your Target: Two people were shot dead and a child was injured Feb. 3 at Texas A&M University-Commerce (northeast of Dallas). According to the Gun Violence Archive, as of Feb. 5 there have been 3,797 U.S. gun violence deaths from all causes in 2020, including 2,376 suicides and 28 mass shootings (four or more people injured or killed).

It's Pete Buttigieg! Well, no, it's Bernie Sanders ... or maybe Elizabeth Warren ... or nobody. ... By the time you read this, we might have an idea who "won" the chaotic (and irrational) Iowa Democratic presidential primary caucuses. ... The real winners? Voters who hope we never have to do it this way again.

Something Rotten: Hundreds of county residents are expected to speak in opposition to the proposed trash transfer station at the site of a problem landfill during a Texas Commission on Environmental Quality meeting tonight, Feb. 6, 7pm, at Bluebonnet Trail Elementary. Local political leaders have also expressed concern.