Election Ticker: The March Toward March 3

Campaign finance numbers set Senate and congressional candidates ahead, leave others in the dust 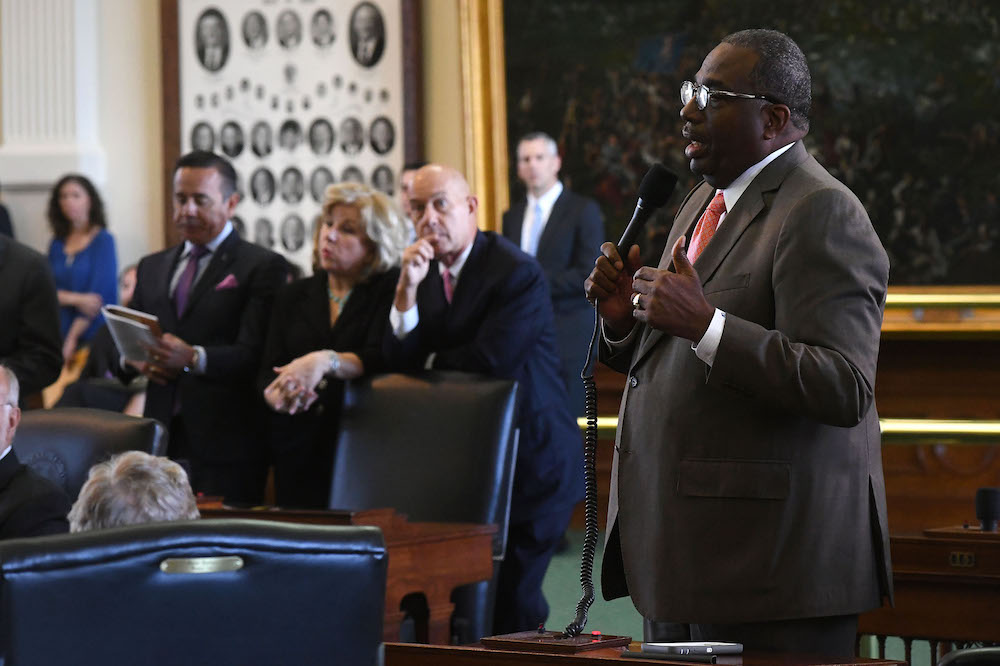 The 2019 fourth-quarter fundraising efforts in the U.S. Senate and congressional campaigns have been posted to the Federal Election Commission website, creating a little more grist for the "Who's Up, Who's Down" grinding mill. "Money don't get everything, it's true" – but if a candidate doesn't possess sufficient funds to be competitive across a 750,000-person district (let alone a state the size of Texas), all the good policy ideas they can fit into a briefcase will not matter. In that spirit, some financial notes (all numbers are as of Dec. 31, 2019):

• MJ Hegar, Amanda Edwards, Cristina Tzintzún Ramirez, and Royce West all appear to have adequate resources for final Democratic primary runs. Hegar has raised more than $3 million this cycle, and had more than $1 million cash-on-hand; the others have COH amounts of $525,000 (West), $331,000 (Edwards), and $230,000 (Tzintzún Ramirez).

• The remaining Dem candidates drop off the cliff, most surprisingly former Houston Congressman Chris Bell, who had only $8,000 left in his kitty (presumably, he's done). The others are not within bad-check distance. It's all relative, of course: GOP incumbent John Cornyn reported a cool $12.1 million in his pocket, which he won't need to dispatch a handful of Republican pretenders before he begins drowning the airwaves in earnest this summer, when the victorious Democrat will be needing to raise a hefty infusion of new cash...

• TX-10 (Austin/Houston): The three Democrats have enough to compete, with Pritesh Gandhi and Shannon Hutcheson each at about $450,000 COH and Mike Siegel trailing at $150,000 COH. (Not reflected on the base FEC report is how much of those funds are future-pledged toward an eventual general election run.)

• TX-17 (Austin/Waco/College Station): The current Dem numbers don't reveal much – Dem candidate Rick Kennedy has raised about $49,000 and spent nearly $39,000; late filer David Jaramillo has raised $14,000 and spent almost nothing. A third Dem candidate, William Foster III, has yet to file a campaign finance report. On the GOP side, carpetbagger Pete Sessions might have a run for his money – at least five Republican opponents report sufficient funds for aggressive primary campaigns.

• TX-21 (Austin/Kerrville/San Antonio): In this nationally watched race, Wendy Davis has outraised GOP incumbent Chip Roy, and each held in excess of $1.2 million (doesn't mean much until the general). Democrat Jennie Lou Leeder soldiers on, but reported only $3,600 in the bank as of the end of the year.

• TX-25 (San Marcos/Austin/Ft. Worth): Returning Democrat Julie Oliver ($130,000 COH) leads the money race over newcomer Heidi Sloan ($82,000), but Sloan has sufficient resources to be competitive through the primary. Incumbent Roger Williams will then deploy his $1.4 million COH, but either Oliver or Sloan will outwork him, and that might be enough to pull off an upset.

• TX-31 (Austin/Killeen/Temple): A hard one to handicap for money or votes, where returning Dem Christine Eady Mann has been working for more than two years and held $46,000, but businesswoman Donna Imam had spent little of her original kitty ($187,000 COH). The others (Eric Hanke, Dan Janjigian, and Tammy Young) were late entries, and it's difficult to tell from their December numbers where they stand now. Can you say "run-off"?

• TX-35 (Austin/San Antonio): Incumbent Rep. Lloyd Doggett has a token opponent, Rafael Alcoser III, who hasn't yet filed an FEC report. Doggett is not threatened in the primary or general, and will be able to spend at least some of his nearly $5 million strongbox to support other Dems.

Last week we reported that Pct. 3 Travis County Commissioner candidate Sheri Soltes had criticized opponent Valinda Bolton for 10-year-old Ethics Commission fines that Soltes found troubling, and Bolton's dismissed as irrelevant, technical violations. Meanwhile, questions had been raised about Soltes' voting record – rather, non-voting record, as Travis County records reflect that her voting history is intermittent: e.g., recorded as voting in the Democratic primary in 2018, but not in November; a similar record in 2016; no votes in 2014; only primary vote in 2012. Soltes insists she has voted regularly, and last year told the Chronicle that a likely confusion between "Sheri" and "Sheryl" explained the apparent omissions. Now she says earlier voting records under her maiden name have been "expunged" by Travis County election officials, "all voting records under any other name. This is a common gender inequality issue faced by almost all women," reads her website (reiterated to the Chronicle). The Ticker asked county Voter Registrar staff about Soltes' claim, and they responded: "No voting records are ever 'expunged.' Voters carry a VUID (Voter Unique Identifier) from the time they first register to a time they have a name change or move within county or move out of county within the state. It follows them throughout the state. Voting records follow the voter within the county. If a duplicate record is accidentally created, when discovered, the correction would be to combine both records so that all the history would be under one." Soltes stands by her explanation. For the record, Bolton is a consistent Democratic voter; the third contender, Ann Howard also has an intermittent Travis County voting record (she has also lived and voted in Virginia), and until 2018 is recorded as voting only in Republican primaries. She told the Chronicle, "Those were strategic votes to help narrow the Republican field."...

A Ballad for Blue Texas

We didn't catch this Democratic melody earlier, but note it now: Retirement counselor, musician, and TX-31 congressional candidate Eric Hanke has composed and recorded an inspirational song for Texas Democrats – "Turn Texas Blue" – and it's definitely worth a listen and a look-see, at his "HankeforTexas" Facebook page (Texas Democratic Party, take note). It runs in part:

Howdy friends and neighbors, I'm a Texan just like you

Spent most my days in the Lone Star State, walking 'round in cowboy boots

Now our nation's at a crossroads, and it's time for us to choose

You gotta search your soul and get down to the polls and Turn Texas Blue...

Follow our continuing coverage of the campaign trail at austinchronicle.com/elections.