UPDATED: Event looks to rally the vote in 2020 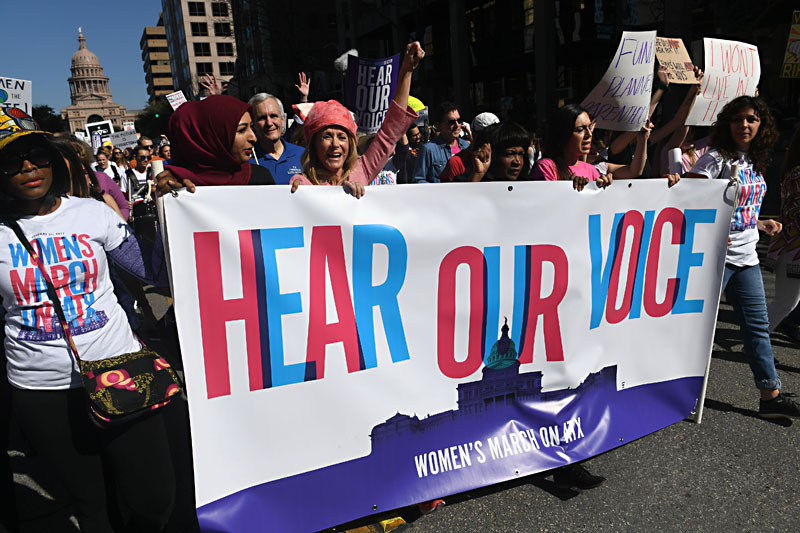 The Austin Women’s March in 2017 (Photo by John Anderson)

Update Jan. 16 10:44am: Organizers have informed the Chronicle that the previously planned march to the Capitol on Saturday has been canceled; the rally at the Capitol from noon-3pm will proceed as scheduled. This post has been edited to reflect this change.

Ten thousand people are expected to converge on the Texas Capitol Saturday, Jan. 18, for the Women's March redux. The event features nearly 20 speakers in a concerted effort to "energize, engage, and unite people," according to the march's co-chair Lisa Traugott. And, because it's election season for most of 2020, much of the focus will fall on rallying the vote.

It's been three years since the original Women's March took to the streets of cities across the globe, including ours, to protest the election of Donald Trump. Austin's 2017 event, marked by the too-popular use of those fuzzy pink hats, saw an estimated 50,000 ralliers. In the years since, organizers have attempted to commemorate the event, with a steadily smaller turnout. But with the March primary just six weeks out, this year's march has a renewed source of energy. Traugott, who started working with the original organizers the "day after" the first event, notes the 2020 march is also celebrating the 100th anniversary of the women's suffrage movement. "Our voice is our vote and our voice matters."

With those stories, march organizers intend to send politicians a message: "Women's issues need to be at the top of their list," says Sethi. "Pay equity, abortion rights, sexual assault, trans rights. The march is a great place for people to realize that if politicians and leaders are not doing this, we need to start calling them out. Really, we have zero time to waste because women are on the brink of a revolution. ... So if you can't do the job, let us do it for you."

A version of this article appeared in print on January 17, 2020 with the headline: Signal Boost For Women’s Rights