From lawsuits to candidates in suits

On Monday, Jan. 6, the Texas Democratic Party filed a federal lawsuit against Secretary of State Ruth Hughs, seeking to overturn her ruling rejecting "electronic signatures" on Texas voting registration forms. "The decision to reject these applications not only misapplies the Texas Election Code," argues the pleading, "but also contradicts the State's longstanding recognition that electronic signatures carry the force of law." In 2018, an estimated 2,400 registrations were rejected because of the rule, and more potential voters were prevented from registering... 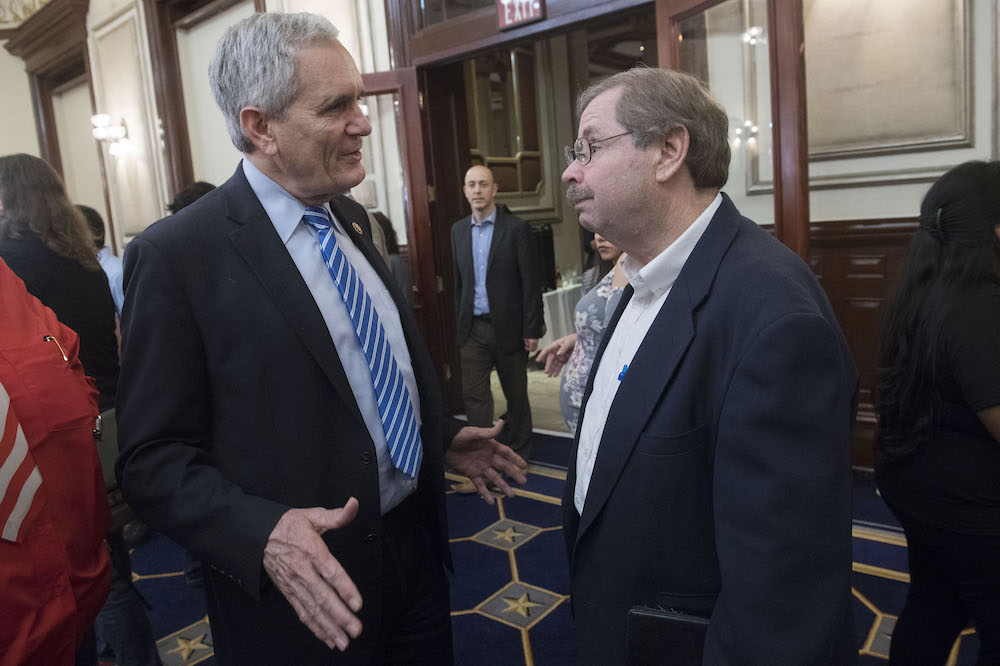 Facing the growing prospect of war with Iran following the recent U.S. assassination of Iranian General Qassem Soleimani, U.S. Rep. Lloyd Doggett has become increasingly active in opposing the Trump administration's moves toward escalating conflict. At a Monday evening rally at the Capitol, a representative for Doggett said in part, "We stand together because we will not stand for more war. ... Every day Trump is in office, the danger grows. ... Wars are so much easier to get into than to get out of."

In a subsequent press release, Doggett recounted his consistent opposition to the war, including his membership in the House "No War With Iran" Caucus, as well as his co-sponsorship of resolutions opposing the war. He also expressed some irritation with the Austin chapter of the Democratic Socialists of America, co-sponsors of Monday's rally, which they claimed was organized to help convince Doggett to oppose the war. Doggett's release tweaked the DSA's practice of taking credit for persuading him to do things he was already doing (e.g., supporting Medicare-for-All and the Green New Deal). "And as usual," reads the release, "DSA, like the rooster claiming credit for the sunrise, is claiming credit for something I already had underway. Only wish they had the capacity and inclination to add to our support..."

Monday afternoon, Annie "Fed Up Mamá" Garcia, one of 12 candidates for the Democratic nomination to challenge U.S. Senator John Cornyn, was in Austin promoting her candidacy and planning for her statewide "Protest Walk" along the Gulf Coast from Houston, across South Texas and the Rio Grande Valley, and up through Austin, Dallas, and then parts of West Texas: "420 miles" in all, a number she says she just (happily) learned is coincidentally associated with marijuana legalization. (She's scheduling the walk in part to frame a February debate planned for Austin.)

Garcia said she decided to run because she found no other Dem candidate sufficiently passionate about Trump's actions against immigrants, about universal health care, or other issues – she particularly objects to MJ Hegar's stance on gun regulation, which she says defers to "gun owners' rights" at the expense of victims of gun violence. She had asked her opponents to join her in some specific border action in defense of immigrants – all declined except Houston activist Sema Hernandez. Attorney Garcia works pro bono on immigration cases, operates two small businesses, and manages a nonprofit (OpHeart) that provides technical support to heart surgeons treating newborns. She cites 1996 Demo­cratic candidate Victor Morales as her campaign model. Political novice Morales won the Democratic primary against three experienced opponents – and lost to Phil Gramm in November, 55-44%...

Federal Election Commission totals have not yet been posted (expected Jan. 15), but the Wendy Davis campaign (TX-21, Austin/San Antonio/Hill Country) is reporting that she has raised more than $900,000 in the fourth quarter of 2019 (ending Dec. 31), roughly matching her third-quarter results "while refusing contributions from corporate PACs and federal lobbyists." Davis faces Jennie Lou Leeder in the Democratic primary, both vying to challenge incumbent Rep. Chip Roy in the November general. "Texans are tired of being ignored by politicians like Chip Roy who answer only to the corporations that bankroll them," said Davis campaign manager Annie Ellison. "This campaign is about the thousands of Texans who donated anything they could, as often as they could, to send a proven fighter to Congress." The campaign claims, "More than 83% or contributions to Davis' campaign were for $100 or less and the vast majority of contributions were from Texas."

How Old Is Justice Hecht?

Chief Justice Nathan Hecht of the Texas Supreme Court has served a record 31 years on the court since 1988 – first appointed chief justice by Gov. Rick Perry in 2013, he was reelected in 2014 for a six-year term. Hecht is unopposed in the Republican primary; Democratic candidates are state district court Judge Amy Clark Meachum and district court of appeals Justice Jerry Zimmerer. There will be a new wrinkle in the general election campaign: In 2007, a state constitutional amendment required judges and justices to retire at the age of 75. Should he be reelected, Hecht will be 75 in 2024, and under Sec. 1-a(1), Article V, at that age "the office of that Justice or Judge shall become vacant on December 31 of the fourth year of the term to which the Justice or Judge was elected." A Jan. 6 story in Texas Lawyer called attention to the anomaly, reporting that if Hecht is elected and has to step down at the end of 2024, the governor would appoint a successor for the final two years of the term. Hecht told Texas Lawyer, "I still have a lot to do, and I want to pursue it to the end" – primarily several administrative reforms, and "certainly, access to justice." Clark Meachum noted that she could become the first woman to be chief justice, while Hecht could become "the first chief justice ever constitutionally prohibited from serving a full term." Zimmerer said it would be "inappropriate" for him to challenge Hecht "simply on the basis of age."