One project stalls, another moves along 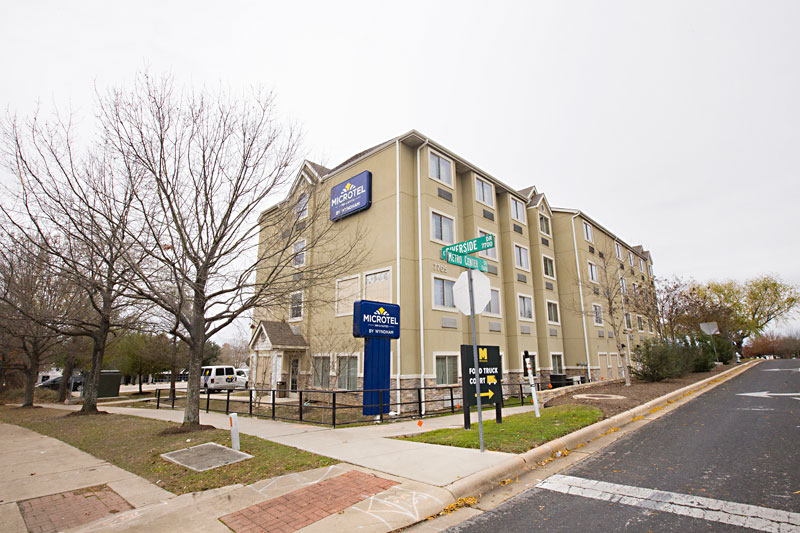 The Microtel Inn & Suites, which stands waiting to be converted into housing for people experiencing homelessness, is currently blocked from that redevelopment by forces experiencing heartlessness. (Photo by Jana Birchum)

The Met Center Property Owners Assoc­i­ation is suing the city of Austin in an attempt to stop the purchase of a motel that would be converted into supportive housing for people experiencing homelessness. On Dec. 10, City Council paused an effort to buy the Microtel Inn and Suites, located at 7705 Metro Center Drive, amid concerns that the property's zoning would prevent it from being tapped for residential use.

The group of Met Center property owners have honed in on the same zoning concerns in an effort to kill the purchase altogether.

Located near Austin-Bergstrom Airport, the Microtel property is within the airport overlay zoning category, which allows for buildings with short-term stays like hotels or bridge housing, but not for longer, permanent living. That conflicts with a long-term plan designed by the Ending Com­mun­ity Homelessness Coalition that aims to purchase hotels and motels throughout the city and eventually convert them into permanent supportive housing for people experiencing homelessness. Primarily, the conversion process involves installing kitchenettes in each room to make them more suitable for long-term living, which also makes the units eligible to receive rental vouchers from the U.S. Depart­ment of Housing and Urban Devel­op­ment. The zoning issue, however, led city staff and ECHO to recommend pausing the Microtel purchase – estimated to cost $6.8 million for the property and another $1 million to renovate its 71 rooms – while they sort out a work-around or find a different location.

The group of Met Center property owners have honed in on the same zoning concerns in an effort to kill the purchase altogether. The suit, filed on Dec. 18, would also preempt any city efforts to change the zoning at the Microtel site to allow for permanent residential use. But ECHO Executive Director Matt Mollica is still interested in the property. He confirmed to the Chronicle that it's "still being looked at by the city, and it hasn't been completely ruled out yet." Even if the Met Center group is successful in preventing the city from seeking a zoning change, Mollica said ECHO would still be interested in operating the site as a place where people experiencing homelessness could live short-term until they can be placed into a more permanent residence.

Regardless of the lawsuit or the current zoning debacle, ECHO is still moving forward with the purchase of the Rodeway Inn near Oltorf and I-35; the city's real estate office is currently closing on the property.

ECHO's motel-conversion strategy is key to the organization's plans to respond to the growing number of individuals living unsheltered in Austin, partly because more than 80% of those individuals are single-­person households. And because motels are already largely set up for residential use – with on-site laundry facilities and space to host on-site supportive services central to the success of the motel model – ECHO expects to keep conversion costs low (they estimate between $3,000-5,000 per unit).

With the help of local organizations providing supportive services – such as substance abuse treatment, job training, and housing assistance specialists – ECHO staff will maintain the property while also working with surrounding communities to ease anxieties over having a supportive housing center in their area. As the past six months have shown, this will be an important aspect of ECHO's motel model's success.

Overall, the organization estimates it will need just under $832,000 a year to operate the Rodeway Inn's 87 rooms. The on-site services will be procured through a request-for-proposal process run by ECHO, to be performed by the specialists doing the work to help people permanently exit homelessness. ECHO estimates the cost of these services – as well as providing food, cleaning supplies, and transportation to and from medical appointments and job interviews – will be roughly $388,000 per year. That puts the total cost to operate the Rode­way Inn as a residence and well-equipped site at just over $1.2 million annually.

To get there, ECHO estimates it will need to raise about $750,000 per quarter over the next two years, amounting to $6 million in philanthropic contributions, bond dollars, and state and federal grants (such as those that subsidize the cost of providing substance abuse and mental health services). ECHO and city staff recommend holding off on buying a third, yet-to-be identified motel until the agency and its partners can raise 25% of their funding goal. ECHO has not released fundraising totals yet, but the agency expects to provide more information early this year.