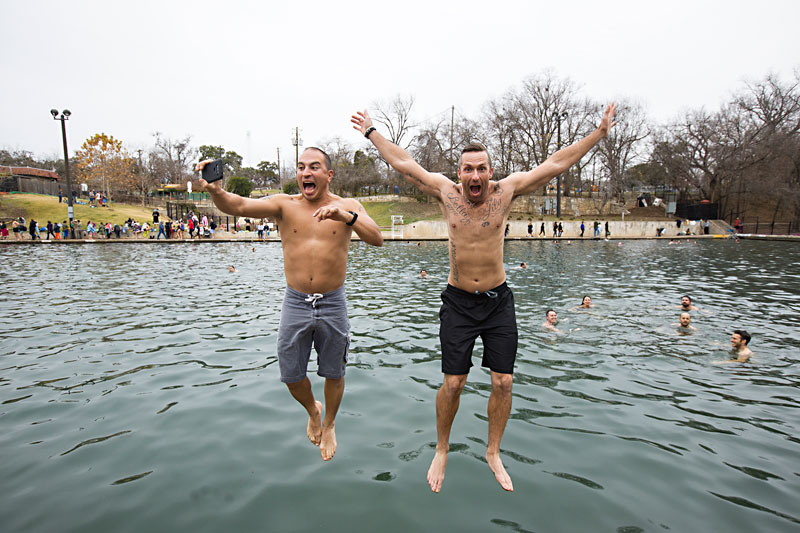 Shrieks of glee and chill could be heard from all around Barton Springs Pool on the first morning of the new year, as Austinites from near and far rang in 2020 by plunging into the cold water for the city's annual Polar Bear Splash on Jan. 1. (Photo by Jana Birchum)

Another Day, Another Shooting: An armed parishioner in White Settlement, near Fort Worth, shot and killed a man who opened fire during the West Freeway Church of Christ service on Dec. 29. The two people he shot were taken to the hospital and have since succumbed to their wounds. Early in 2019, the Texas Legislature made it legal for people to open carry in all places of worship. The law went into effect in September.

Speaking of Gun Violence ... National news outlets reported this weekend that 2019 saw more mass killings than any other year to date – going as far back to "at least the 1970s," wrote CNBC. Of the 41 total mass killings (when four or more people are murdered, excluding the perpetrator), 33 involved firearms, including the massacres in El Paso and Odessa earlier this year perpetrated by white men with assault weapons. In total, more than 210 people were killed by this senseless violence.

One Stuffed Bus: Over one weekend in December, Capital Metro, Whole Foods Market, and the Central Texas Food Bank collected 2,552 pounds of food and raised more than $6,460 for local Texans facing hunger. In its eighth year, the annual Stuff the Bus fundraiser and food drive set a goal to provide at least 20,000 nutritious meals to hungry residents. That goal was surpassed: On Dec. 30, Cap Metro announced the drive had funded 27,973 meals.

MoPac Gains Lanes: Southsiders who've been left unmoved by the MoPac express toll lane north of the river will have a consolation prize: The Central Texas Regional Mobility Authority is poised to add a (non-tolled) lane on each side between Barton Skyway and Loop 360. The Statesman reports construction on the mile-long bottleneck-relief project could begin by year's end.

Texas Is Back! For the second year in a row, after suffering through a snake-bit regular season, a Texas Longhorns football squad overperformed in a New Year's bowl game (this time, the Alamo Bowl) against a ranked opponent (this time, Utah) and sparked loose talk about how next year, they will be championship contenders.