Is There an Equity Audit in AISD’s Future? 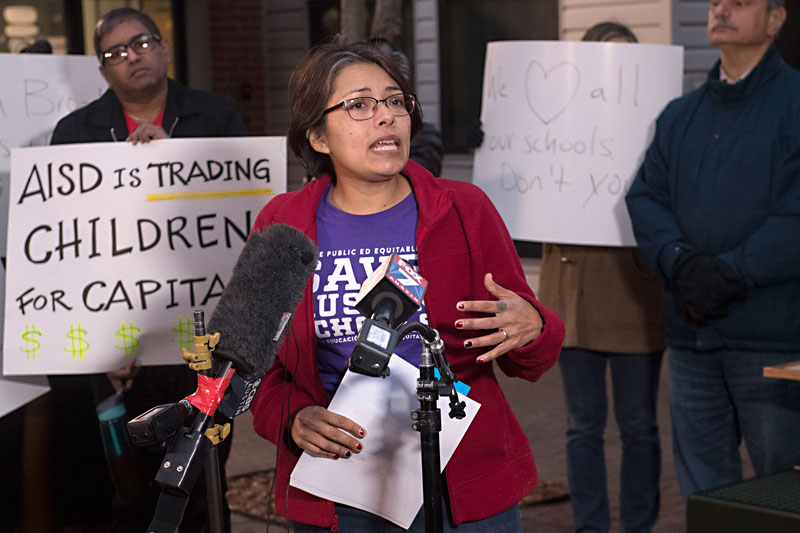 Calls for a third-party "equity audit" at Austin ISD are growing, with some on the board of trustees insistent that such a review be conducted before the district moves forward with any future campus closures and consolidations as part of its ongoing School Changes effort. The idea was initially put forth by AISD Equity Officer Dr. Stephanie Hawley at the board's Nov. 18 meeting – just hours before trustees voted to close four elementary schools.

Since then, AISD released a report from Hawley assessing how the district failed in its promised commitment to equity in the first round of School Changes (of the four schools that will close, three are east of I-35), which pointedly calls for an external equity audit. "To establish a basic understanding of how equity affects the district's decision-making and policy development, it is recommended that an equity audit be conducted of academics, finance, facilities and all bond projects in the past decade," the report reads.

“The administration needs to stop the School Changes process and not go forward until it examines the decisions already made in light of Dr. Hawley’s recommendations and what an equity audit may reveal.” – Trustee Ann Teich

Thus far, AISD leaders have not committed to launching such an audit; but three trustees have voiced their desire to move forward with hiring a consultant to do that work. At the board's meeting on Dec. 16, Trus­tees LaTisha Anderson, Ann Teich, and Arati Singh all called on Superintendent Paul Cruz to look into hiring an auditor, or at least scheduling time for the board to publicly discuss such a plan. It's no coincidence that those trustees were the three votes against school closures in November.

Teich told the Chronicle that for her, pausing and reflecting on the impact of this initial round of closures, and considering more closely what future closures might do, would be critical before moving forward. "The administration needs to stop the School Changes process and not go forward until it examines the decisions already made in light of Dr. Hawley's recommendations and what an equity audit may reveal."

With just three vocal supporters of an expansive equity audit on the board, initiating the process is not certain. Cruz could choose to hire the consultant on his own, but if the estimated cost exceeds $100,000, he would need board approval to proceed. Hawley wouldn't be able to do the work herself since she intends for any audit to be external and independent, but she is also currently the only person working in the district's fledgling Equity Office. (District officials said interviews are in progress to hire staffers to work under Hawley beginning in the spring semester.)

Hawley continues to press the case for an equity audit, if only indirectly. At a town hall organized by Austin Voices for Edu­ca­tion and Youth, Hawley expanded on some of the criticism she leveled at the School Changes effort in her equity report. She warned against throwing around the word "equity" lightly, saying it was important to talk with black and brown communities about how to improve schools in their neighborhoods. "You can be engaged in tokenism and say we're going to build a new building for Black and brown kids and call it equity," Hawley said. "But equity is not just about the goal; equity is about the way you get there. The way you go determines where you go."

In her report, Hawley emphasized this point, saying the district waited too long to share its closure plans with campus administrators, faculty, and parents, and did not explain how specific proposals were aimed at addressing historic inequities within the district. Some of the materials translated into Spanish contained incorrect information; and too few Black and Asian American families were communicated with directly when the plans were rolled out.

Ensuring these mistakes are not repeated as School Changes proceeds – the district is still weighing closing and consolidating eight more campuses included in the original plan – is critical to achieving any meaningful kind of equity in the process, says Hawley. Parents with the group organized as Save Austin Schools are in agreement; they rallied outside AISD headquarters ahead of the Dec. 16 meeting to call attention to what they say are conflicts of interest with district officials and Trustee Jayme Mathias. But they're also determined to push the district, and the six trustees who voted to approve the closure plan in November, into supporting a comprehensive equity analysis before moving forward.

Despite her dismal assessment of AISD's first round of School Changes, Hawley said at the Austin Voices event that she is given "radical hope" by district staff's willingness to engage in self-reflection. "It's really critical that we approach this work from a place of humanity and assume people are doing the best they can in their current mindset," she said. "But we must fiercely hold people accountable for the change that's necessary."