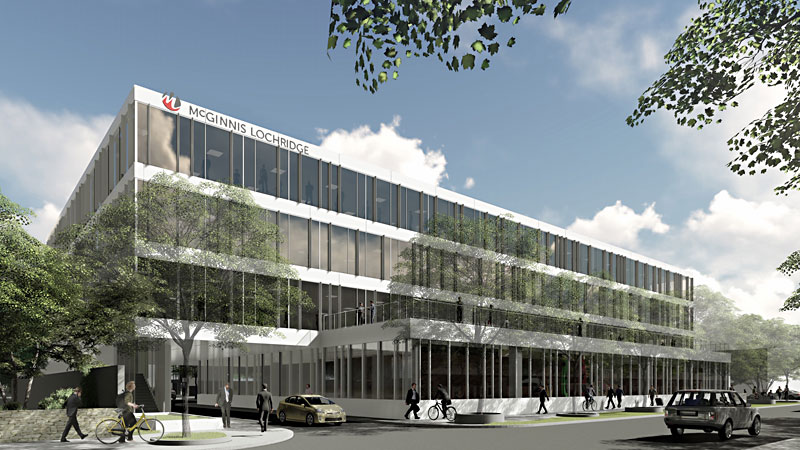 Redevelopment of the Carruth Administration Center – the soon-to-be-former Austin ISD headquarters complex – is moving forward, as new owners Schlosser Development Corporation revealed their plans to demolish four of the five buildings on the 2.7-acre property at 1111 W. Sixth. This will make room for a new four-story structure, which will increase the available space on the site west of Downtown by 109,000 square feet.

Three floors of the new building, which will front West Sixth, will be office space, with the first floor reserved for retail. The remaining existing building will be renovated by SDC for future use; it is also four stories, with a ground-level lobby and three floors of office space. SDC also plans to expand underground and surface-level parking at the CAC to bring the total number of off-street spaces up to 537. Groundbreaking for the redevelopment is set for the first quarter of 2020, and the site's anchor tenant, the law firm McGinnis Lochridge, plans to occupy one of the two buildings in the fall of 2021.

Schlosser already has an expansive presence nearby, in the part of Downtown known to oldtimers as the Warehouse Dis­trict (now referred to by the developer as the Market District), beginning in 1996 with the 12-acre tract at Sixth and Lamar, now home of Whole Foods Market's flagship store. More recently, in 2017, SDC opened the 16-floor building (seven of which are reserved for parking) across Bowie Street from Whole Foods, known as Shoal Creek Walk.

Meanwhile, AISD central office staffers have almost completed relocating to the district's new HQ at 4000 S. I-35, near the U.S. Highway 290 flyover at I-35. The nine-story, 142,000-­square-foot Southfield building will consolidate 700 AISD administration staffers now spread across three facilities into a single location. Renovations are ongoing to create a more modern interior design than the CAC, including large open working spaces.

AISD expects to land about $36.5 million from the sale of the CAC (the deal has not yet closed, because AISD Police and the Student Services department are still located at the site). The district spent about $28 million to buy South­field, and another $26 million on interior and exterior renovations. Barring any construction delays, the board of trustees plans to hold its first meeting there in late January. A board work session scheduled for Jan. 13 will be held at the AISD Performing Arts Center at Mueller while the district's A/V equipment is set up at the new HQ.