Austinites have until Jan. 4 to weigh in with their feedback on the 12 finalist ideas to improve East Austin mobility in the City:One Challenge, the city's collaboration with corporate partners including Ford Motor Company, Microsoft, and Dell Tech­nol­ogies. As we reported in July, the project, which Ford has brought to cities throughout North America, aims "to help put residents at the center of the mobility conversation" and to tap into local creativity and innovation to solve on-the-ground problems.

The specific challenge in Austin asked for proposals to "increase access to healthy living in East Austin." Of more than 150 proposals received, the organizers and other community partners selected a dozen to advance to the current "Refine" phase, which includes not only the Challenge team's expert advice but your feedback, which you can provide online. You can both comment on and upvote your favorite proposals; out of these 12, two entries will be selected to share a $100,000 prize that will fund pilots to test out the solutions.

As is common with projects like this, the 12 proposals that made it this far include a number of existing startups, some local and others that have already gone to live elsewhere, aiming to enter our market with the help of the challenge prize. The entries posted online have plenty of info about where these solutions and their backers are in their life cycle, how they define their user base, how they'd develop a pilot and use the $100,000, and how they intend to sustain themselves in the future. Here's a rundown of the dozen finalists (in random order):

• Austin Brio – Inclusive City on Wheels equips wheelchair users with surveying technology (on their chairs) and trains them to assess the condition of the sidewalk network through their daily travels. The information gathered informs the city's plans not just for ADA accessibility on specific sidewalks, but more broadly on how well the network in East Austin connects to transit, and by extension to grocery stores, clinics, parks, and other amenities of healthy living. It's been piloted in other cities but not yet deployed.

• SKOOP Free Rides Initiative is an actual company that handles advertising and sponsorships for electric vehicles, apparently focused on pedicabs, and is on the ground with "digital mobile billboards" in Michigan and New Jersey. The proposal online is heavy on marketing language and light on specifics, but apparently the ad revenue is used to cover the cost of free rides.

• GoodApple is an existing Austin pilot, developed by both longtime residents and students at Dell Medical School, that delivers boxes of rescued produce (that would have gone otherwise unsold) from local farms to paying customers, and then matches that with boxes delivered free to families facing food insecurity. (As of press time, this is the most popular of the finalists.) 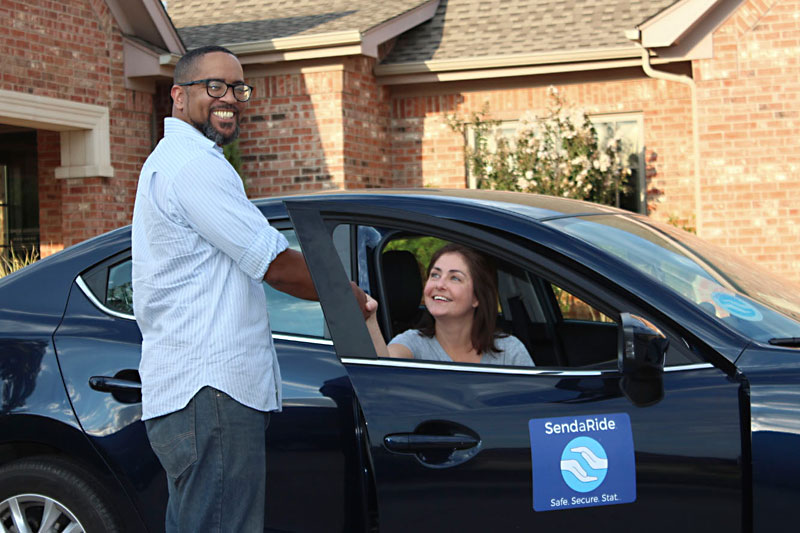 • SendaRide is a specialized ridesharing service targeted at health care providers and patients – more customized than public transit, ride-hailers such as Lyft (which has partnerships in Austin with providers and social service agencies), or taxis, but less so than actual medical transport. The CEO is a longtime health care attorney who developed the service, which is on the ground in Oklahoma, after her own back surgery.

• Hippo, as in Hippocrates, is a British company whose service is one step up again from SendaRide, involving not just specially trained drivers but customized vehicles that can accommodate wheelchairs, stretchers, oxygen tanks – but that are not ambulances and cost about half as much to operate.

• HealNow is a B2B e-commerce platform for pharmacies, presented here as a way to enable deliveries and online payment; that's all we know.

• GoKart Kids is a transportation service envisioned to serve parents of K-12 students to get them to activities and such, with a focus on families with greater needs as well as partnerships with local agencies to serve children in foster care. This idea is still mostly on paper; the founders propose using the prize money to establish proof of concept and work out marketing strategies.

• Equidad Express is conceived by longtime community and business leader Ashton Cum­ber­batch, who formed the namesake nonprofit in 2018; its plan is to turn the mobility equation around: making services mobile so they can go into access-challenged neighborhoods in the Eastern Crescent. The prototype to be funded with the prize would be converting a Capital Metro bus into a mobile grocery store.

• GoKid is another transportation solution for the youth-and-family market, this one a platform for carpool matching aimed at low-income school communities as well as sports leagues and community centers. This one's live across the U.S., including in Houston, with 500,000 trips under its belt, and won a $4,000 pitch prize at SXSW 2018.

• Tappy Guide is a "smart city solution for individuals with disabilities" – an app that provides navigation and information to guide folks through their first-and-last-mile journeys after using public transit. It's also a finalist in the Indianapolis City:One Challenge, going on now as well, and was a finalist in the Grand Rapids, Mich., challenge in 2018.

• State of Place is an ambitious AI-driven data tool that uses existing urban features to identify the best locations to deploy "rotating, mobile, healthy places" – basically pop-ups to deliver services or activities along the "tactical urbanism" model. The proposal is quite detailed, for anyone who wants to see how urbanists and smart-city folks come together and wonk out.

• RideConnect is an existing tech startup with (in their own words) "an app that enables anyone to run a transportation business, for any type of transportation service they wish to offer to their customers, or to the general public." This broad category would, for the challenge's purposes, be used to support individual solutions for ride­sharing and access to services.