The latest from the local campaign trails 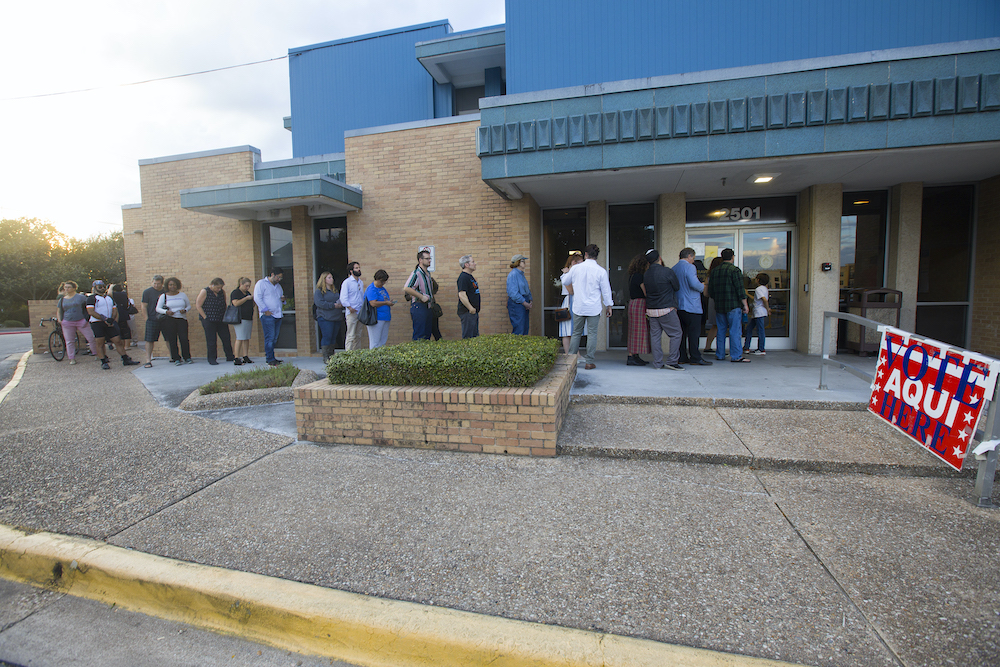 Candidate filing for the March 3 primaries closed Dec. 9 (early voting begins Feb. 18). The Texas Democratic primary ballot holds no great surprises, but a few things are worth noting as the stretch run begins. At the top of the Travis County filings are no less than 18 presidential candidates – all you've heard of and a few you haven't. The current "front-runners" – Joe Biden, Elizabeth Warren, Bernie Sanders, Pete Buttigieg – are there, with a couple of billionaire wannabes (Michael Bloomberg, Tom Steyer) and some total unknowns (like ex-football coach Robby Wells). In the ballot order, Warren drew the top spot, and San Antonio's Julián Castro is sixth – maybe that finally wins him some visibility.

A little further down, there are 12 Dems officially filed for the U.S. Senate, now including late-filer Houston attorney/activist Annie "Mama" [sic] Garcia. Instead of campaign funds, Garcia's asking for donations to her GoFundMe campaign for flu vaccinations for refugees at the border.

Of those dozen Dems aiming to take on GOP incumbent John Cornyn, perhaps five have a serious shot. That calculus (and the arguments) may have changed this week, when the Democratic Senatorial Cam­paign Committee put a thumb on the scale, endorsing MJ Hegar. DSCC chair and Neva­da Sen. Catherine Cortez Masto called Hegar "the strongest candidate to flip the U.S. Senate seat ... running on the issues that matter most to Texans." The DSCC press release also noted that Hegar (one of the earliest filers) has raised more than $2 million, currently outstripping her opponents.

Unsurprisingly, the backlash from opposing campaigns was immediate. That of Austinite Cristina Tzintzún Ramirez called the endorsement "tone-deaf to the diverse Texas electorate. They have decided to ignore several more qualified and experienced candidates of color, who have done the work to transform the politics of our state, in favor of a former Republican." (Hegar reportedly voted in the 2016 GOP primary for Carly Fiorina, saying she did so as a protest against Don­ald Trump.) Similarly, state Sen. Royce West of Dallas denounced the decision as "a slap in the face to 11.6 percent of our state's population that identifies as African American. However, we will not be locked out of this process. African Americans will turn out in large numbers and they will vote their conscience, and not the DSCC's choice." The leading Houstonians in the race, Chris Bell and Amanda Edwards, issued similar denunciations, rejecting the DSCC endorsement as evidence of inside-the-Beltway politicians attempting to override Texas voters.

The Central Texas congressional races also have endorsement news. In TX-10, the Mike Siegel campaign announced the support of the climate activist Sunrise Move­ment and University Democrats. (The UDems also endorsed Tzintzún Ramirez for senate, Rick Kennedy in TX-17, Wendy Davis in TX-21, Julie Oliver in TX-25, and Christine Eady Mann in TX-31.)... Kennedy, long the sole Dem running in TX-17, faces two late-filing opponents: former Prairie View A&M instructor William Foster III and Dept. of Veteran Affairs employee David Jar­a­millo (there's a growing logjam on the GOP side to succeed retiring incumbent Rep. Bill Flores, including carpetbagging former Rep. Pete Sessions, defeated in 2018 in another district)... In TX-21, Wendy Davis tweeted a video ad featuring a parody of the notorious Peloton cycle Christmas ad; it features the candidate facing the daunting challenge of campaigning and urging voters to "give [GOP incumbent] Chip Roy the gift of unemployment..." Davis' primary opponent, Jennie Lou Leeder, celebrated her candidate filing – "proud to be running to represent this district which I love and have family ties dating back to the mid 1800's" – with a coy slogan: "Let's elect a LEEDER to the House!"

An accidentally leaked state GOP strategy document (unsigned and marked "draft") targets a dozen state House races for reversal of 2018 Democratic wins, including those of the four Central Texas freshmen: Erin Zwie­ner (HD 45), Vikki Good­win (HD 47), James Talarico (HD 52), and John Bucy (HD 136). The document ponders the potential effects of the removal of straight-ticket voting (a GOP legislative strategy that might well backfire upon them) and the Trump effect: "Given the polarizing nature of the President ... some Republicans will refuse to turn out during the General Election because they don't want to vote for him." Austin Rep. Celia Israel, who is chairing the House Democratic Campaign Committee, told the Chronicle that her four colleagues have demonstrated leadership in specific, constituent-conscious ways (e.g., Zwiener on pipeline issues, Talarico on public education) and that the Dems will field "good candidates with a record of service."

Texas Democrats added 12 House seats in 2018 and need nine more to win the majority. Though the lists vary among different campaign groups – HDCC, Texas Dems, Annie's List, etc. – at least two dozen seats are "in play" for Dem­o­crats in 2020: the nine that Beto O'Rourke won in his 2018 race against Ted Cruz, plus another 15 that he lost by single digits (see "Flip That House!" News, Oct. 25). This week, The Texas Tribune reported that as many as 30 seats should be "competitive" in either direction, as the state GOP likewise turns its sights on the most vulnerable Dems.