The debate over density and gentrification continues 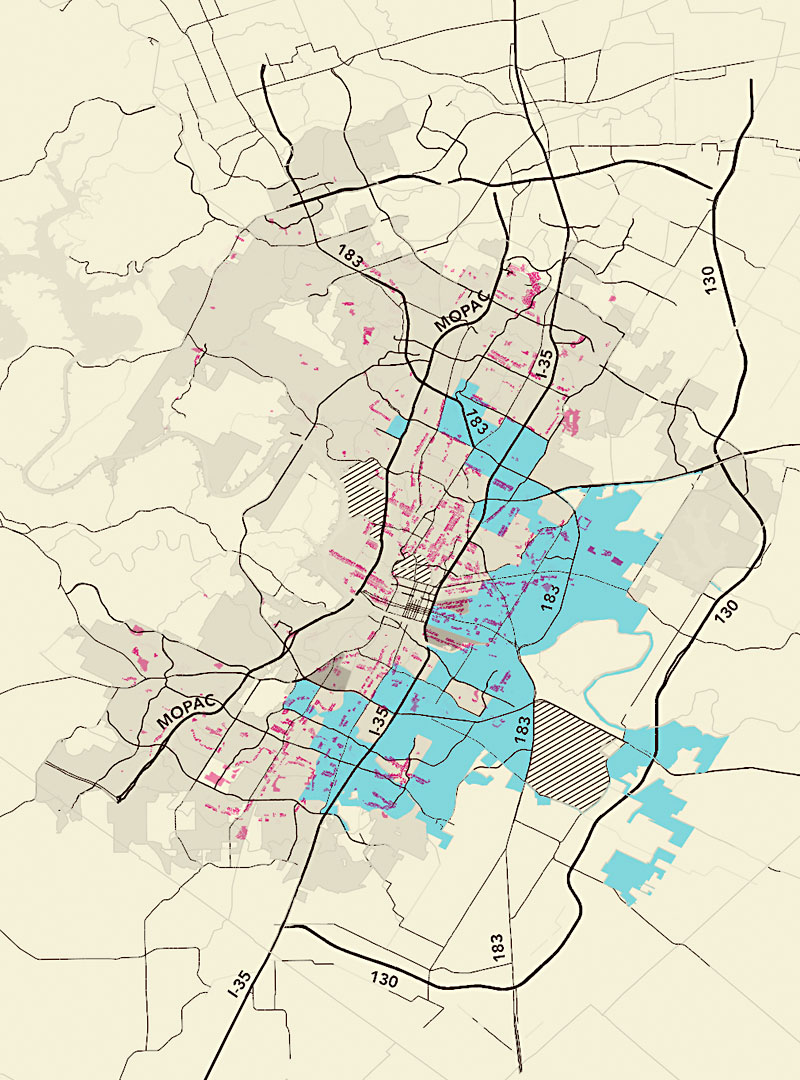 One of the most highly anticipated components of the LDC revision involves increasing density along urban corridors and centers and transit priority networks, as defined in Imagine Austin and the Austin Strategic Mobility Plan. Between those centers and corridors lie many of Austin's pre-1980 single-family neighborhoods, built out before the current LDC ("Title 25") was adopted. Connecting those neighborhoods to the urban centers and corridors is the "missing middle" – an urban fabric that actually exists in many older Austin neighborhoods (smaller lots, walkable business districts, small apartment buildings) but is illegal to build under Title 25 rules. The LDC rewrite seeks to correct this with its transition areas and zones, where missing middle would be the norm. While this is generally what Council says it wants, concerns have flared from both ends of the dais that the future development in those areas, allowed by right under the new code, will hasten gentrification and displacement, and replace today's (dwindling supply of) reasonably priced real estate with expensive new builds. This map shows one way these concerns translate into changes to the staff's LDC draft.

• The pink areas are the transition zones as mapped by staff in October (corresponding to the most intense neighborhood or "house-scale" zoning, R4, and the least intense multifamily zoning, RM1 – see "Know Your Zones: Guide to Austin’s Land Development Code Lingo").

• The larger blue outline includes the census tracts that are on the front lines of current and prospective gentrification, as identified in UT's Uprooted Project. Within that area, staff has proposed both reducing the number of transition zone lots and tweaking the allowable density throughout to support "incremental increases in housing diversity" – i.e., smaller, cheaper options. On top of that, Mayor Pro Tem Delia Garza's equity overlay, if adopted, would apply in much of the blue area, limiting developers' ability to tear down existing housing to build bigger, more expensive units.

• Outside of the blue area is where staff has proposed expanding the use of transition zones to offset density reductions elsewhere and create more opportunity for missing middle housing in neighborhoods where it is scarce. The Council members representing those areas have proposed various amendments aiming to restrain that increased density, except in cases where developers actually commit to building affordable housing on-site.