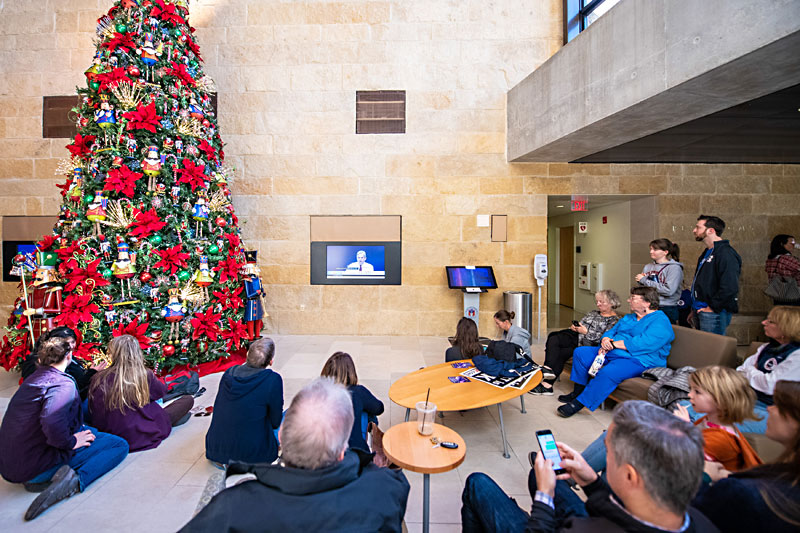 An overflow crowd watches Mayor Steve Adler in the City Hall atrium during Saturday's (Dec. 7) all-day public hearing on the Land Development Code Revision. Council voted 7-4 on Wednesday to approve the code on first reading, with more edits to come in the new year. (Photo by David Brendan Hall)

Canceled Reservation: City Council backed off the proposed purchase of a second motel on Metro Center Drive to convert to transitional housing for the homeless, after ECHO Executive Director Matt Mollica said the airport overlay zoning restrictions might cause future complications. The site is still under consideration, but Council asked staff for further review before adding it to the likely property list.

Starbucks Is Coming: For the past 20 years, Austin's airport has eluded coffee megastar Starbucks, but no longer. In 2003, negotiations with the chain fell through after Council stood firm on only having local brands; this week, ABIA announced that two Starbucks, holding a 10-year lease, will open in the airport by early January – one inside the terminal, one at baggage claim.

How Many More? Houston police Chief (formerly Austin Chief) Art Acevedo blasted GOP Sens. Mitch McConnell, John Cornyn, and Ted Cruz for their opposition to the Violence Against Women Act, after a Houston police sergeant was killed responding to a domestic violence report. Acevedo cited their opposition to closing the "boyfriend loophole," because "the NRA doesn't like the fact that we want to take firearms out of the hands of boyfriends that abuse their girlfriends."

Meanwhile, in D.C. ... U.S. House Judiciary Committee leadership announced two draft articles of impeachment on Tuesday against President Trump. The articles say "Trump has acted in a manner contrary to his trust as President and subversive of constitutional government" and deserves removal from office.